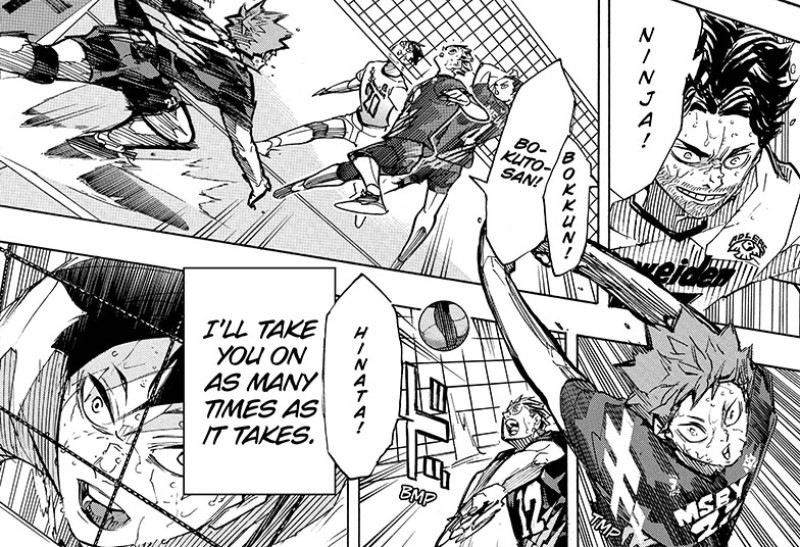 We end as we began: Kageyama vs. Hinata.

It isn’t the first time I’ve said this, but we are rapidly approaching the end. Haikyuu chapter 400 made it abundantly clear that this set, this match, this series is almost over, and it delivered 19 pages of superbly drawn and paneled action showcasing the last few points of the game to end all games.

Haikyuu chapter 400 made me extremely emotional, even before I found out that the manga will be ending this month. (Word is that the final chapter is 402. This was apparently mentioned in the Shonen Jump magazine, but as I have the app, it isn’t mentioned anywhere, so I don’t have a link to any official confirmation.) It’s one thing to know that the end is coming, but it’s quite another to have a set date.

This chapter is just exquisitely done; every character gets a chance, and displaying their high school banners behind the players made me tear up, especially on the final page, with the “Fly!” banner above both Hinata and Kageyama.

Let’s take a moment to talk about the banners. This actually started in chapter 399 with Hoshiumi’s, but I actually didn’t notice that until I read this chapter and saw everyone else getting their own. (To be perfectly honest, I only noticed the Karasuno banner, and it wasn’t until I saw a photoset on Tumblr that I realized each character had gotten a panel like that.)

These banners are their badges of honor, and in most – if not all – cases, the mottos depicted on the banners reflect their personal attitudes towards volleyball. These banners remind us of their roots and call back to earlier chapters when we saw their high school matches. It highlights what makes each of them a great player and emphasizes that volleyball – and indeed all sports – can mean different things to different people, and that there’s no one way to approach the game.

There is obviously a lot going on in this chapter, and I don’t think I’ve been able to properly process everything. But what sticks in my mind is Hinata going for the minus tempo quick and Kageyama already being there, because he knows Hinata so well and anticipated he would go for that play. That the chapter ends with them both going for the point is so poetic. Of course, this series would end with Hinata and Kageyama; it started with them.

The audience shots are also fantastic in Haikyuu chapter 400. Sugawara is holding merch for both teams, and the Karasuno third years are conflicted about who to root for. Osamu and Koganegawa anticipated the minus tempo quick in the same way that Kageyama did. All of the Fukurodani alums are ridiculously proud of their ace.

(But where is the rest of Nekoma?) 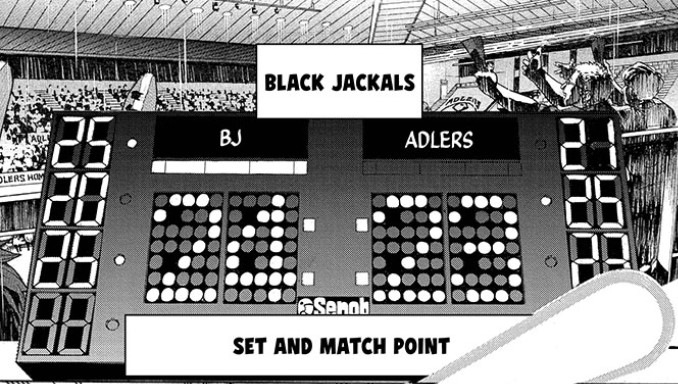 As this is match point, and given the cliffhanger for an ending, it’s reasonable to assume that this is it. After this, the game will be over. Hinata has fulfilled his long-ago promise to himself and bested Kageyama on the court. It’s very odd to think, though, that for the characters, this is only the start of their season. We as the audience are treating this game like it’s the final battle because for us it is; the journey for us ends after this. But the characters will continue, and that makes me feel a little bit better that my favorite manga is coming to a close.

I have some thoughts and musings now that Haikyuu!! is definitively coming to an end, but I feel those are better suited for once the last chapter has been published. For now, I’ll just say I hope in the last few chapters we are given a few “proper” reunions and that I at least get one shot of Hinata in a uniform for the Japanese national team.

Have you read Haikyuu chapter 400? What did you think?