Haikyuu Chapter 398 Manga Review: “He Who Would Climb a Ladder Must Begin at the Bottom” 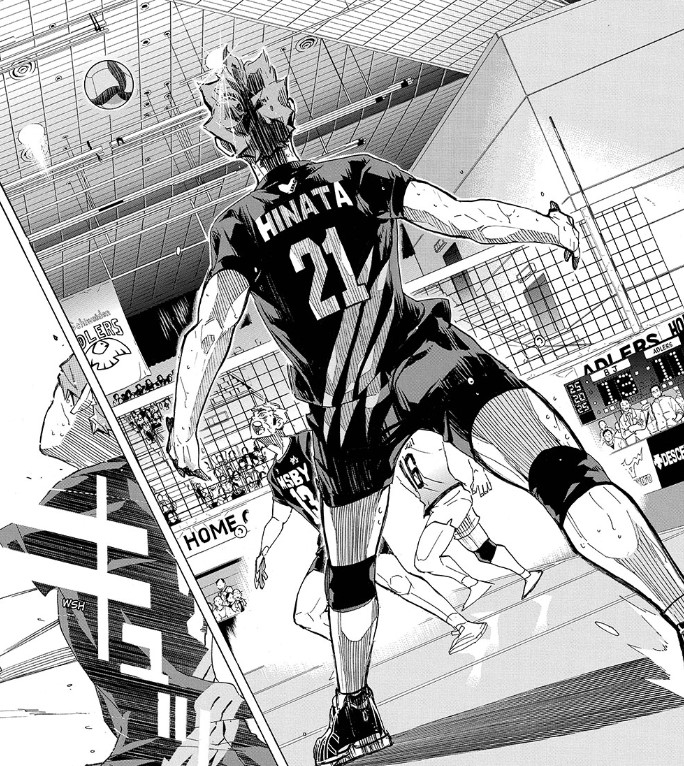 Happy birthday, Hinata. For your special day you finally get a badass pose of your very own.

I waffled back and forth about reviewing this week for many reasons, but what ultimately pushed me over is that today (June 21) is Hinata’s birthday. Haikyuu chapter 398 is all about Hinata and highlights his growth as a player in a very succinct and beautiful way.

Haikyuu chapter 398 was the same length as usual – about 19 pages – but it went by so much faster than normal, probably because it focuses on one single, solitary receive. This match has been zipping by (they are already on the fourth set!), and “He Who Would Climb a Ladder Must Begin at the Bottom” slowed it down to one moment in one game, a showdown that has been building.

There are a lot of rivalries in Haikyuu!!, which isn’t surprising considering the subject matter and the sheer number of opponents we are introduced to. The primary rivalry is Hinata versus Kageyama, which is the core of the series, but as we’ve learned post-time skip, there are a lot of other rivalries worth mention. No less important to the development of the characters involved is the rivalry between Hinata and Ushijima. 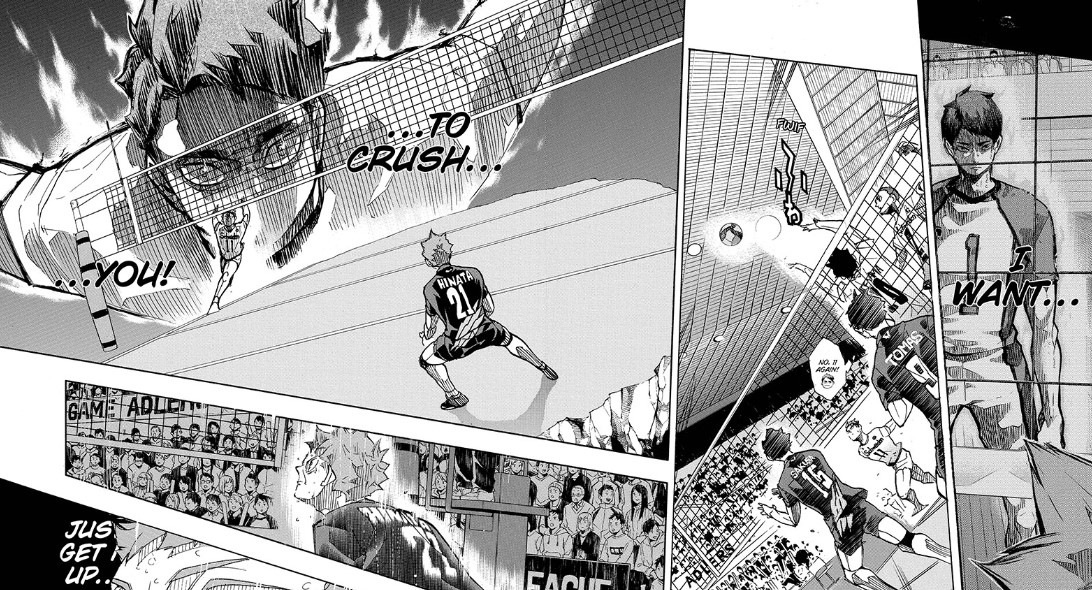 It was Ushijima’s dismissal of Hinata as a player and Karasuno as a team that motivated Hinata so much in his first year. And Hinata’s stubborn refusal to just let himself get beaten brought out a competitiveness in Ushijima that he likely hadn’t experienced for a while. So it’s rather poignant that we revisit that intensity in Haikyuu chapter 398, which has Hinata repeatedly foiling Ushijima’s attempts at scoring.

Ushijima has always come across as an emotionless, tactical player, but here he seems to be targeting Hinata because of a personal vendetta. You love to see it.

But what Haikyuu chapter 398 also gives us is a lovely montage of Hinata’s growth as a volleyball player by showing us all the times he failed. Ukai monologues about how he’s developed all of his skills but especially his balance. On the surface, he is talking about Hinata’s actual balance – his stance. This is something he worked very hard on in Brazil and is referenced in the panel where he imagines that the current game is being played on sand. But it’s also a more overall observation of how he has become a better all-around player.

Is it a bit repetitive to keep having chapters that emphasize Hinata’s growth as a player? Perhaps. Do I care? Nope.

When Hinata first started playing volleyball, he was essentially only good at jumping and spiking. He had the speed and the reflexes to handle Kageyama’s ultra-quick sets, but he didn’t have the skill or the experience for anything more advanced. Over the course of his first year at Karasuno, he worked on developing the other areas of his play. But it was his time in Brazil that contributed the most, because as a beach volleyball player, it was necessary for him to learn how to do everything. 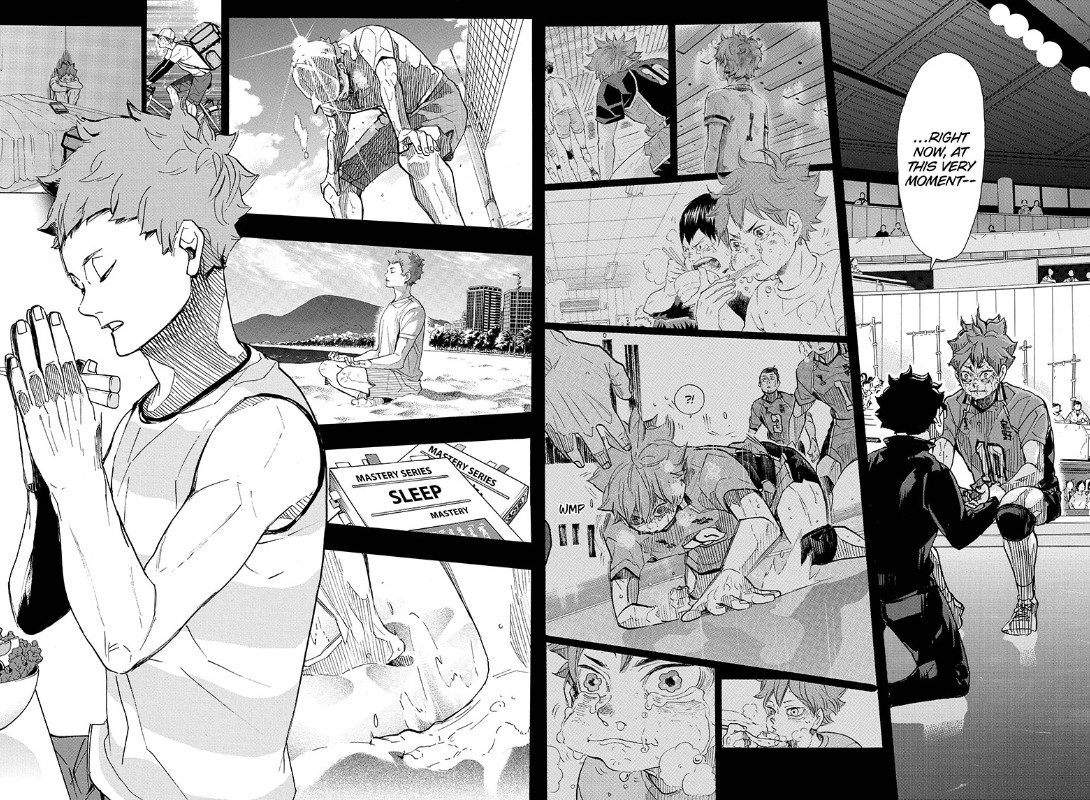 As the chapter’s title says, “He Who Would Climb a Ladder Must Begin at the Bottom”. Hinata has been knocked to the bottom more times than we can count, and each time it has only made him more determined. He has the dedication and the drive. He has devoted his life to this sport. He has endured taunts and jeers and losses and he is finally here, standing on the court again, on par with the best in the country (and the world). This time, he’s not going to lose.

The callbacks in this chapter amplify the emotion in both the action and in the flashbacks. In chapter 370, Hinata has a framed plaque on his wall that reads, “A journey of a thousand miles begins with a single step.” But if you go even further back, in chapter 211, when Takeda is chastising Hinata for crashing the first years’ training camp, he tells him, “He who would climb the ladder must begin at the bottom.” And now it’s the title of the chapter showcasing how much Hinata has achieved over the years. It’s enough to make anyone tear up.

One thing I have to mention is the design decision to have so many double-page spreads. Haikyuu will have at least one a chapter, usually to highlight a specific moment of action. But chapter 398 was almost entirely two-page layouts. (That’s probably the reason it felt so short!) I think this helps give weight to the panels in a way that the single-page layout wouldn’t. It ramps up the intensity and gives each moment more of an impact.

This chapter also had a very final feeling to it. I suspect this match will go to five sets, but I can’t help but feel that we are rapidly approaching the end of Haikyuu, and I am very much not at all ready for this.

Have you read Haikyuu chapter 398? What did you think?

Previous:Get Ready for the Yaoi Anime “The Titan’s Bride” to Premiere This July