Again, this is the least spoilery image in the chapter.

It’s only been two weeks since the last chapter of Haikyuu!!, but for fans it’s felt much longer. We have reached a turning point in the story, and no one knew where it was going. Haikyuu chapter 370 arrived with much anticipation and trepidation, as we boldly follow Hinata on his journey.

*This article contains spoilers for Haikyuu chapter 370. Read at your own risk.*

In the interest of having a buffer of spoilers for those of you who may not read Haikyuu!!, this introductory section before I talk about Haikyuu chapter 370 is going to be about my cat. My cat did a really cute thing earlier today where she caught sight of her reflection in my tablet and started attacking it. If you follow me on Twitter, I posted a video.

Now, back to volleyball.

First, the glorious full-color first page reveals what many of us were afraid to think: whatever happens, this is the final arc of Haikyuu. It makes sense. Now that we’ve seen that the time jump was for real, there are only so many places this manga can go.

It’s not, as many of us (or at least I) assumed, a story about the Karasuno volleyball team. This is, as Haikyuu chapter 370 reminded me, a story about Hinata Shoyo. 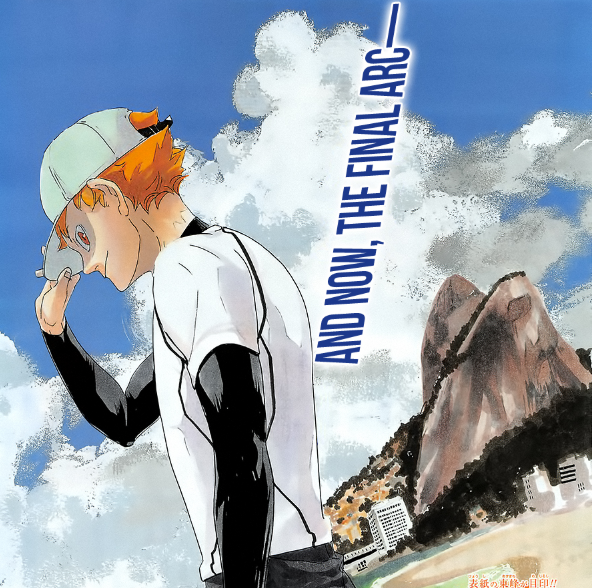 By the way, that text isn’t on the app, so thanks for that.

It’s been five years since Karasuno lost the Spring Tournament. We see Yachi in college, and through her we get a brief overview of what happened during their other two years of high school. It’s fitting that it’s Yachi giving us this information, since it was she who “closed the book” on the previous arc in the last chapter.

There is a lot to parse through with what we learned, but there are a couple of things I want to focus on.

When Hinata and the others were third years, they made it to the semifinals and placed third. But Karasuno never won Nationals. It’s a bit disappointing but ultimately completely realistic. It’s only been a few years since they returned to national prominence, and they were playing against historically strong teams.

(Side note: we still don’t know who won Nationals that first time. SERIOUSLY. WAS IT FUKURODANI OR NOT?)

There’s a mention of losing to Dateko in the Interhigh, so at least that fabled rematch was remembered, even if there is only one panel to commemorate it. But what captured my attention most was the panel featuring the four first years as third years, and the numbers decorating their backs. 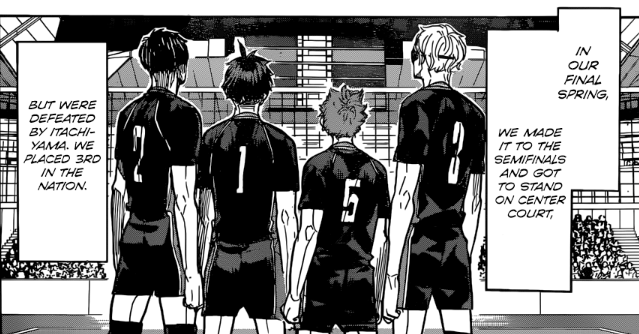 Kageyama, Yamaguchi, Hinata, and Tsukishima as third years at their final tournament.

This is not quite what I was expecting, and it really makes me wish we had gotten to see any of this. Yamaguchi is wearing the traditional captain’s jersey – although without the dash on the bottom of the number that’s on the front, we have no idea who actually was the captain – and Hinata is wearing number 5. Jersey numbers are usually chronological by year, with number 4 typically being reserved for the ace.

This means that poor Hinata not only apparently never became the ace of the team, in his final year he was given a lower number than someone who hadn’t been on the team as long.

Excuse me, I’m going to need a minute.

This is Hinata’s story, after all, and Haikyuu chapter 370 reminded me of something that I had forgotten in the course of getting attached to all of these stupid volleyball boys – to the crows and cats and owls and…whatever the heck Aoba Josai is. Hinata’s goal since the very first chapter has been to be on the court longer than anyone, to stand on the same court as Kageyama and beat him.

As much as I loved their partnership, as much as I hoped it would continue as they went to college together (I read a lot of fic, okay?), for Hinata, the ultimate goal has been to defeat his greatest rival. Going to Brazil, playing beach volleyball, this is how he plans to achieve that goal. 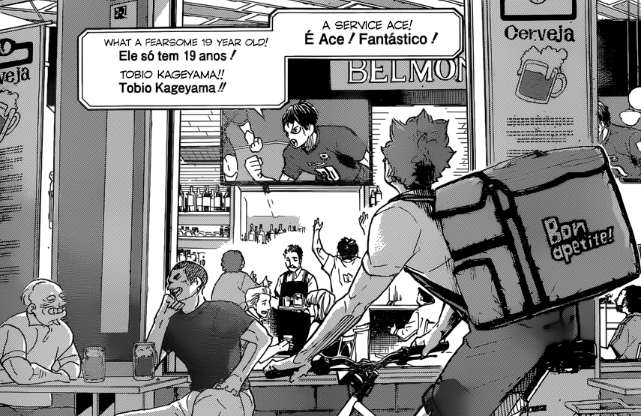 Hinata watches Kageyama play for the Japanese national team at the 2016 Olympics in Rio.

Also, while for many fans this time jump seems to have come out of nowhere, there are a few instances where something like this was hinted at earlier in the series. Hinata’s declaration to Kageyama, for starters, and Kageyama’s eventual response about how that could mean being the best in the world. During the first years’ training camp, Hinata decided that he had to learn how to do everything – a wish he restates to Ukai when he announces that he wants to learn beach volleyball.

I don’t know if I’d call these moments foreshadowing or not. I still think there were too many dropped plot lines to believe this was truly where this series was meant to go (at least at this point). However, it does stand to reason that this was always the destination, even if we skipped ahead a bit.

This arc seems to make it a little more obvious that the we are headed for the 2020 Olympics. I can’t imagine that, with Kageyama at least on a national level and Hinata determined to get there, that wouldn’t be the direction this story is going. It also seems very clear that a Hinata versus Kageyama battle is going to happen, since we’ve once again been reminded of it. (I also love the callback to their first meeting as teammates at Karasuno, with Kageyama serving and Hinata receiving.)

I think the only way this makes sense is if Kageyama decides to take up beach volleyball. If Hinata goes back to traditional volleyball, they would have to play on the same team, but a country can field up to two beach volleyball teams in the Olympics.

Then again, the Olympics could have nothing to do with it. It’s mentioned in the chapter that Kageyama is considering a move to a foreign league, and it’s possible that he and Hinata could run into each other there.

Also, Hinata is given a deadline of only two years to learn from this particular coach, and he’s already halfway through it. He could be planning a return to Japan and trying to go pro there.

Let me hear your theories! Now that we know a little more, what are your thoughts on the time jump? Do you think we’ll see the other characters again? How do you think we’re going to get the fated Hinata/Kageyama showdown? 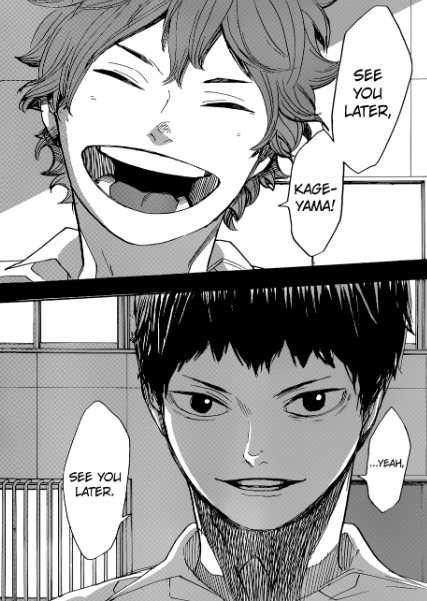 Just break my heart, why don’t you?