Haikyuu Season 4 News to Be Announced During Livestream Next Week 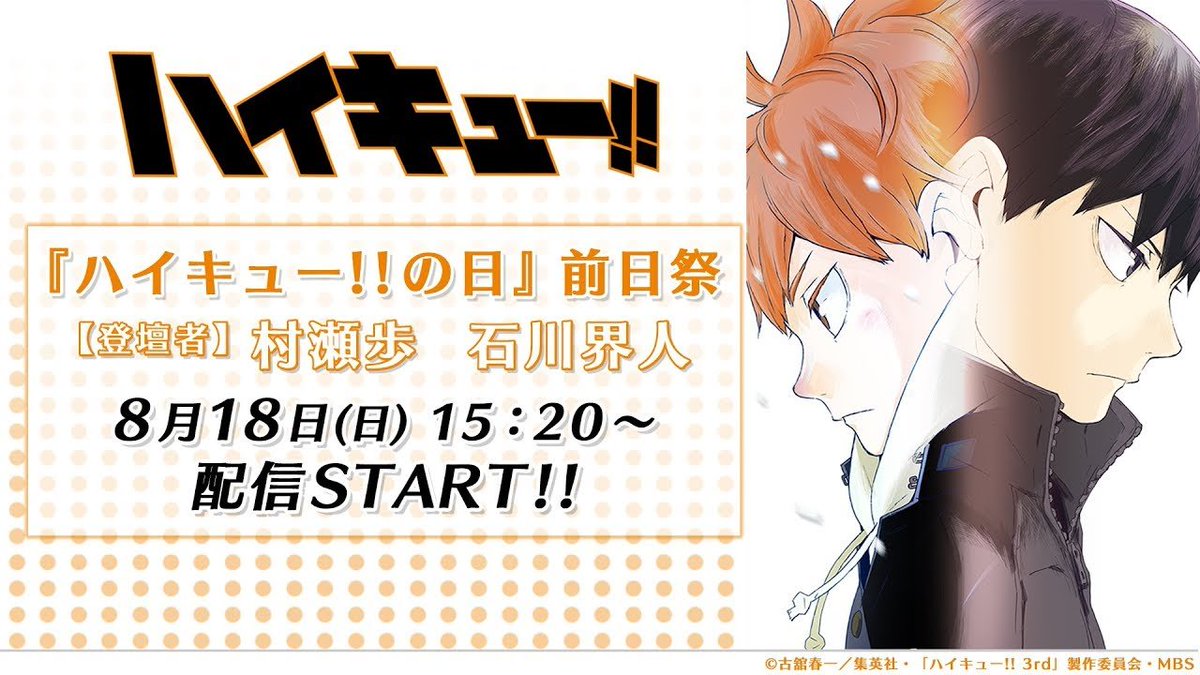 Get ready, everyone, because we are fast approaching the official kickoff date for season 4 of Haikyuu!, which I know we have all been impatiently waiting for. But it looks like a Haikyuu livestream will give us news even sooner!

The TV rebroadcast for Haikyuu has ended, and it’s time to start getting excited about season 4. (Like we weren’t already!) The official kickoff event is September 22, but we are allegedly due for a major announcement next week on a Haikyuu livestream!

Announced on the show’s official Twitter, the Haikyuu livestream event will be held Sunday, August 18 at 3:20pm (Japan time) and feature stars Ayumu Murase (Hinata) and Kaito Ishikawa (Kageyama). The talk show will be titled “Day Before Haikyu!! Day Festival” and broadcast live on Periscope and Toho Animation’s YouTube channel.

Of course, now the speculation is what they intend to announce. Will they actually be giving us news on the highly-anticipated season 4? (Air date? Number of episodes?) Or will they only be giving us more information on the upcoming kickoff event and save all the good stuff for that?

Then, of course, there is all the speculation on just how much season 4 will cover. It’s been hinted that we will make it to the national tournament in season 4, which could mean any number of things. We also don’t know how much of the other schools’ matches we can expect to see. Nekoma and Fukurodani feature pretty heavily in the manga both leading up to nationals and during the tournament, so how many of those chapters will we see animated? Will we see the Tokyo qualifiers?

I have so many questions and I want all of them to be answered during the livestream next week because I cannot wait until September.

Hit me up with your theories! How many episodes do you think season 4 will have? How much of the manga do you think it will cover?