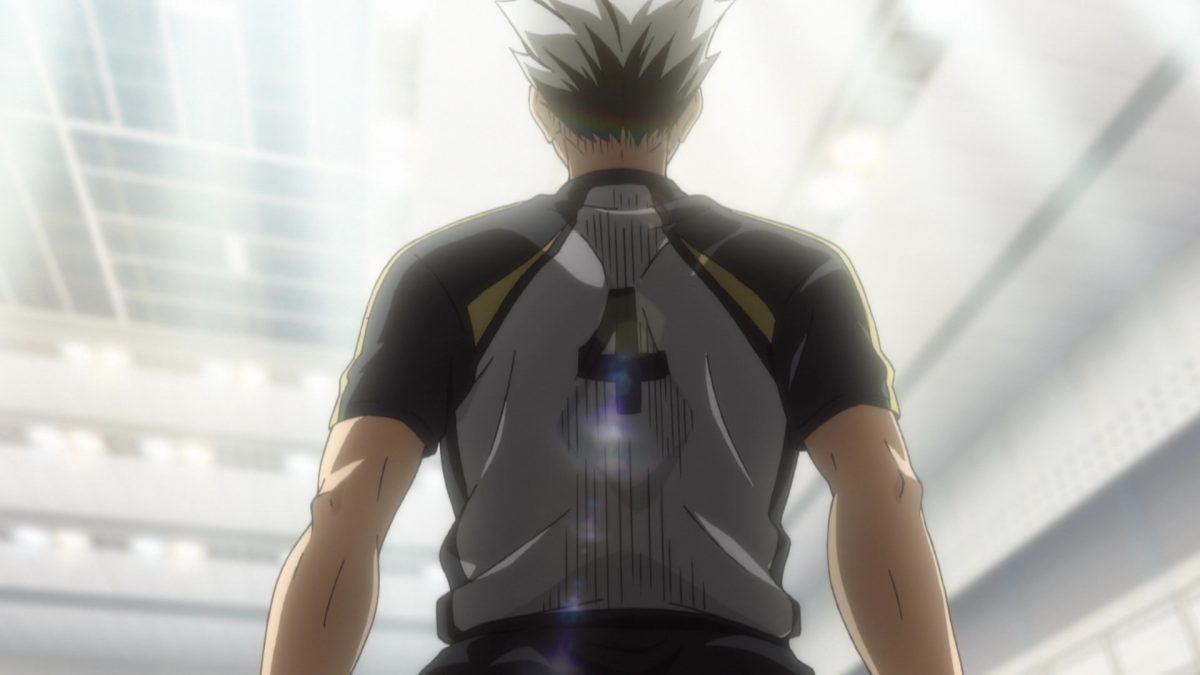 Karasuno has emerged victorious from their first match at Nationals, and “Vivid” takes the opportunity to check in on a few of the other teams we’ve come to know and love. One of the great things about Haikyuu!! as a series is how much it makes you care about the other teams – like Nekoma and Fukurodani.

I love that “Vivid” shows us what’s going on with the other teams. This is one of the few sports anime where I’ve been just as invested in the opponents as I am in the main team, and with so many of our favorites at Nationals, surely we have to spare some screentime for the rest. We only briefly look in on Nekoma’s and Fukurodani’s matches, but it’s enough to remind you of what they’ll be like as opponents: Nekoma, frustrating as ever with their endless rallies, and Fukurodani, revolving primarily around Bokuto and his moods. (Remember, Karasuno has yet to beat either team.)

Haikyuu!! has some amazing relationships. I honestly can’t think of a single dynamic on this show I don’t enjoy, and this episode highlights what makes this series so fantastic at them. Multiple relationships are on display here, from the strange dance Fukurodani (particularly Akaashi) is constantly doing to keep Bokuto buoyed, to the destined rivals that are Sawamura and Kuroo, to Hinata and virtually every strong player that exists in Japan. 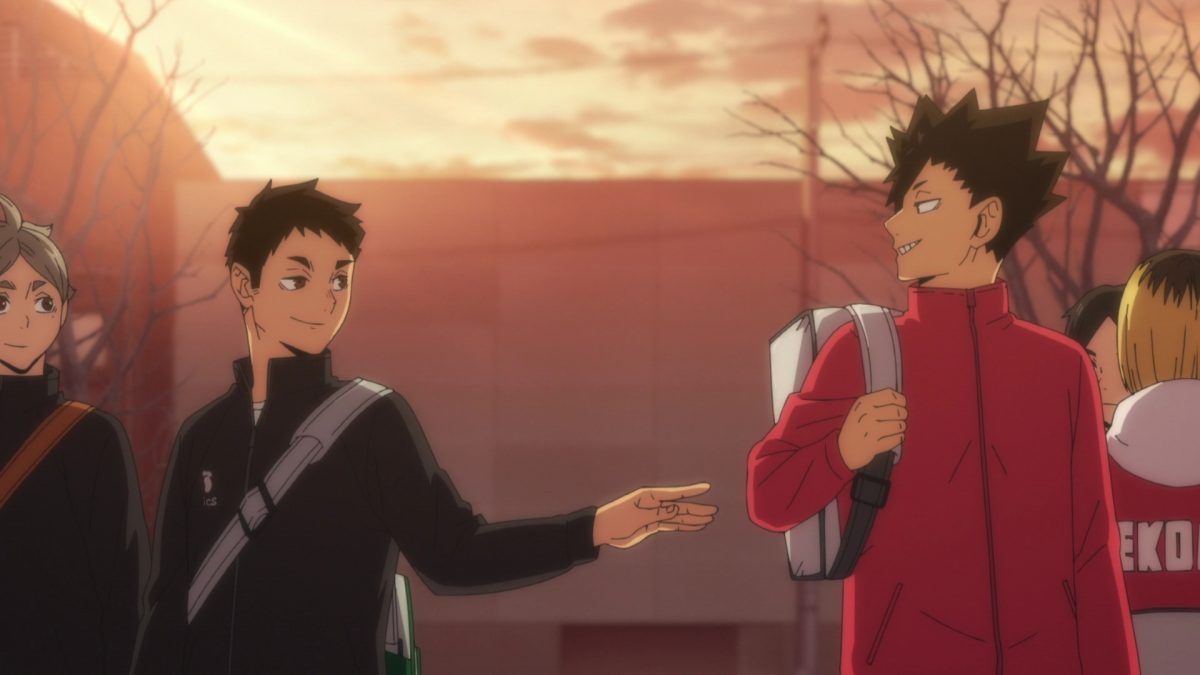 “Vivid” actually contains one of my favorite Hinata and Bokuto moments – where Hinata shows up on the sidelines of Fukurodani’s match and proudly shows Bokuto the shirt he bought, which just so happens to be a shirt that Bokuto owns. I absolutely love the mentor/mentee relationship that Hinata and Bokuto have, and this scene is one of the perfect examples as to why. The two have similar personalities and similar attitudes towards volleyball; Hinata is constantly in awe of Bokuto, who thrives on that kind of attention.

But one of the big things about this episode is, of course, the fabled meeting between Hinata and Hoshiumi. I’ve been waiting for these two to meet since Hoshiumi’s introduction, and there are two things I love about it. First, it warms my heart to know the rest of Karasuno are concerned about how Hinata will react on meeting another player so similar to him who is better at everything. (Of course they needn’t worry. Hinata thrives on competition and pressure.)

Second, I crack up constantly at how Hoshiumi reacts to virtually everything around him. He’s annoyed that Kageyama and Hinata aren’t more impressed by him, but I don’t think he realizes they are impressed – they’re just not intimidated. It’s not really in their nature to be intimidated. 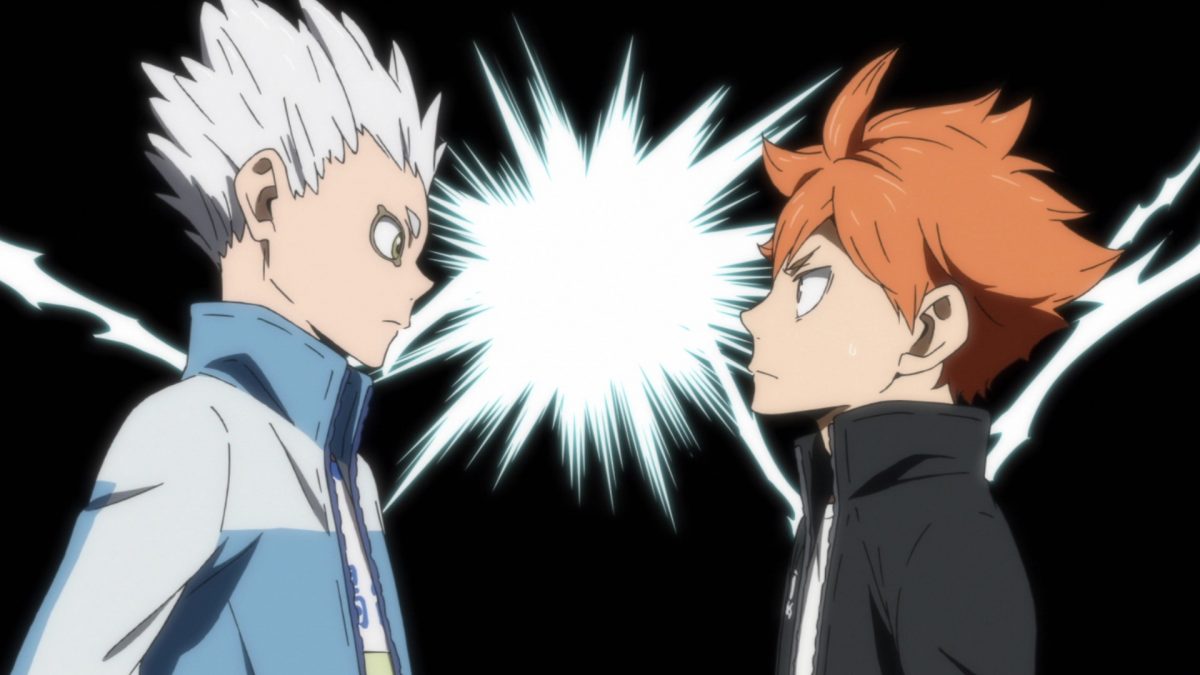 This, however, is Nationals. It’s a whole new ball game. We saw their nerves a few episodes ago, when they had difficulties adjusting to playing in a much larger arena, but I liked the reminder with Sawamura not even noticing that his senpai had come to watch the game.

There were other little moments – aside from Hinata going courtside to get a better look at Hoshiumi’s playing – that hammer home that Karasuno is a little out of its element. Sawamura’s serious face after challenging Kuroo that they’d better win their next match and Asahi sympathizing with Nekoma’s opponent at his inability to land a spike are both seemingly inconsequential but taken together paint a pretty specific picture.

Haikyuu!! is good at this as well. Episodes, on the whole, are quite well done, with the overall story being interesting and engaging. But each episode has little moments that can punch a laugh out of you, or make you sit up and take notice. Whether it’s profound statements seemingly out of nowhere, or unexpected moments of levity in an otherwise serious situation, this series is great at surprising you.

“Vivid” is helping to lay the groundwork for future aspects of the Nationals arc (including some moments that I really hope we get to see animated) while managing to be pure Haikyuu!!.

Have you seen “Vivid”? What did you think?