Unlike the previous couple of episodes, which have focused primarily on Hinata, “Take It Easy” splits itself a little more evenly between the two training camps, where Hinata and Kageyama are having vastly different experiences.

Hinata is making the most of his job as ball boy. By observing the various matches, he is able to identify a player’s strengths and weaknesses. “Take It Easy” comes from his observation of Kunimi (and Kunimi’s reaction to this is hysterical), whose passes are high so that he and his partner have the time to situate themselves without having to run around a lot.

I always loved this arc in the manga, because Hinata has some amazing character development during it. He really grows as a player and as a person, and this is emphasized when he helps rival Hyakuzawa after he gets down on himself for not being as skilled as the others. That scene highlights both why Hinata is such a fantastic protagonist and how far he’s come even in this short amount of time.

Despite Hinata’s disappointment over not getting chosen for either training camp, and the depressive mood he was in for the first couple of episodes, he has really snapped out of it. When Hyakuzawa berates his own abilities and suggests that Hinata should have been chosen instead, Hinata wisely acknowledges that everyone who was invited has something special that warranted it. He has changed so much from the start of the series; it’s amazing to see his growth and maturity.

Moments like this are why Hinata is one of my favorite anime protagonists. He’s so optimistic and positive. He radiates energy and warmth and likability, and he influences everyone around him.

Kageyama, meanwhile, seems to be annoying every powerful player in Japan. We still haven’t seen a lot from the All Youth Training Camp, and though “Take It Easy” gives us our longest amount of time with it, there isn’t a lot in the way of plot movement. There is a nod to Kageyama’s character development by acknowledging that he’s trying to be more communicative with his teammates, but this episode mainly seems to serve as a way to introduce all the characters we’ve just been getting glimpses of. It’s just hysterical that our introductions to them occur when Kageyama gets on their nerves.

For the curious, we were introduced to Sakusa Kyoomi (who was mentioned in season 2 as one of the top 3 aces in Japan), Hoshiumi Kourai, and Miya Atsumu. Without going into too much spoiler territory for anyone who is anime-only, all three of these characters are extremely important later in the series. Of all of them, I have been most eagerly anticipating Atsumu, voiced by the incomparable Mamoru Miyano, who is stellar as usual.

However, Hoshiumi’s introduction was hilarious, and the animation in both that scene and the one of his jump were fantastic. Hoshiumi’s jump actually looked a little different than normal animations, but it calls back to Oikawa’s serve as a way to emphasize that he isn’t the usual player and this is meant to be something incredible. Him being annoyed that Kageyama wasn’t impressed is just the icing on the cake. 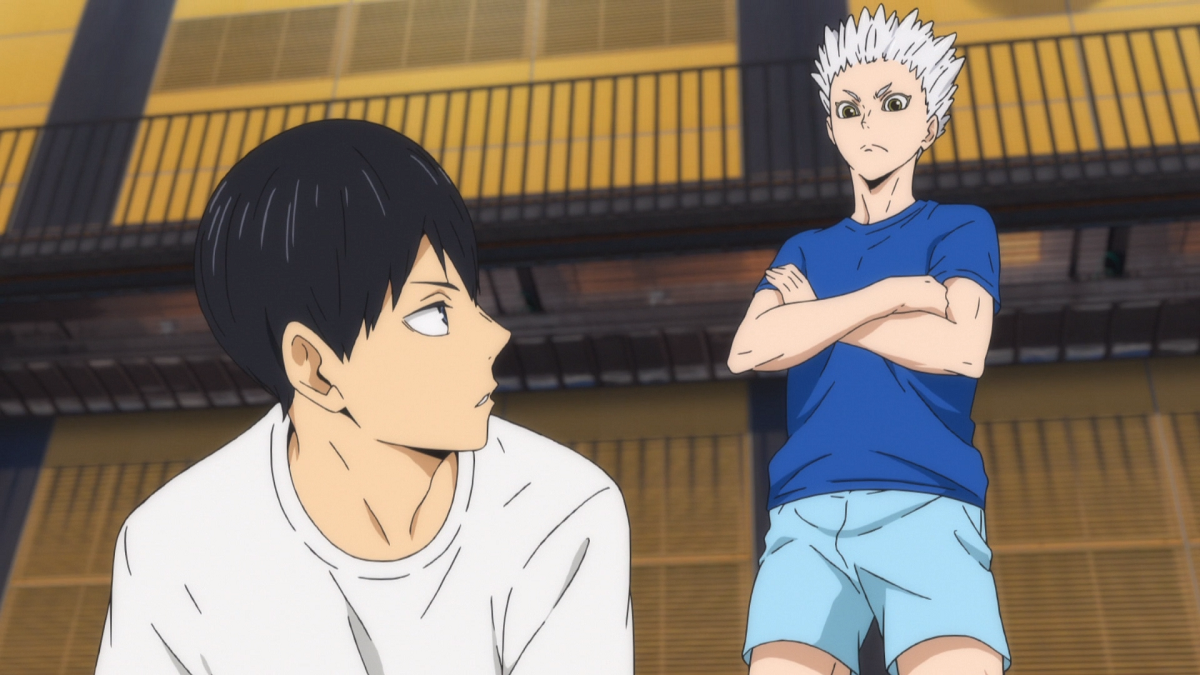 Speaking of the animation, in this episode, you can really tell the difference in character design this season. It was very obvious especially in the scene with Hinata talking to Hyakuzawa, when we could see both of them in profile. Hinata’s face looked very different. Overall, I haven’t minded the change, but it seemed very out of place at that moment.

That said, all of the characters seem so much more expressive, and I love it.

I also caught some familiar audio tracks in “Take It Easy”, which now just has me in the mood to listen to the soundtrack again.

Have you seen “Take It Easy”? What did you think?