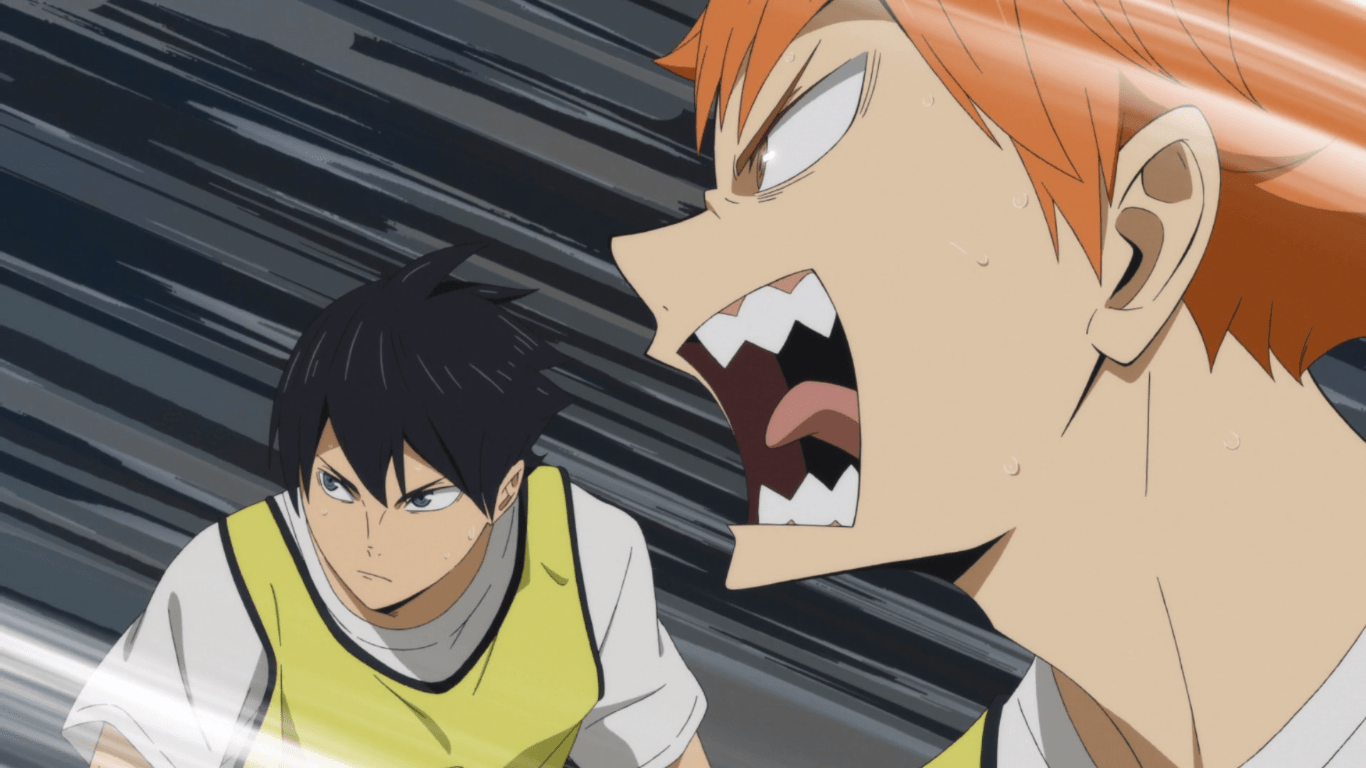 “Challenger” wraps up the practice match with Dateko by putting a little emphasis on some of the other players on Karasuno. We’re inching closer to Nationals, and it’s time to get hyped with some insane character development.

I spent the entire episode trying to figure out who the titular “challenger” was, and I honestly think it’s everyone. Hinata was challenging everyone at Dateko, but mostly Koganegawa, with his decoys. Kinoshita was challenging Yamaguchi with his jump float serve. Kamasaki wants to challenge Asahi by growing facial hair.

In short, everyone is inspiring everyone else to improve. It’s a continuing theme with Haikyuu!! that the players motivate each other, but it’s really highlighted in this episode. Kageyama acknowledging that Hinata likely purposely lured Koganegawa to jump, and Nishinoya recognizing that there are ways in which he is lacking, are perfect examples. I really love the positive influence the members of Karasuno have on each other. 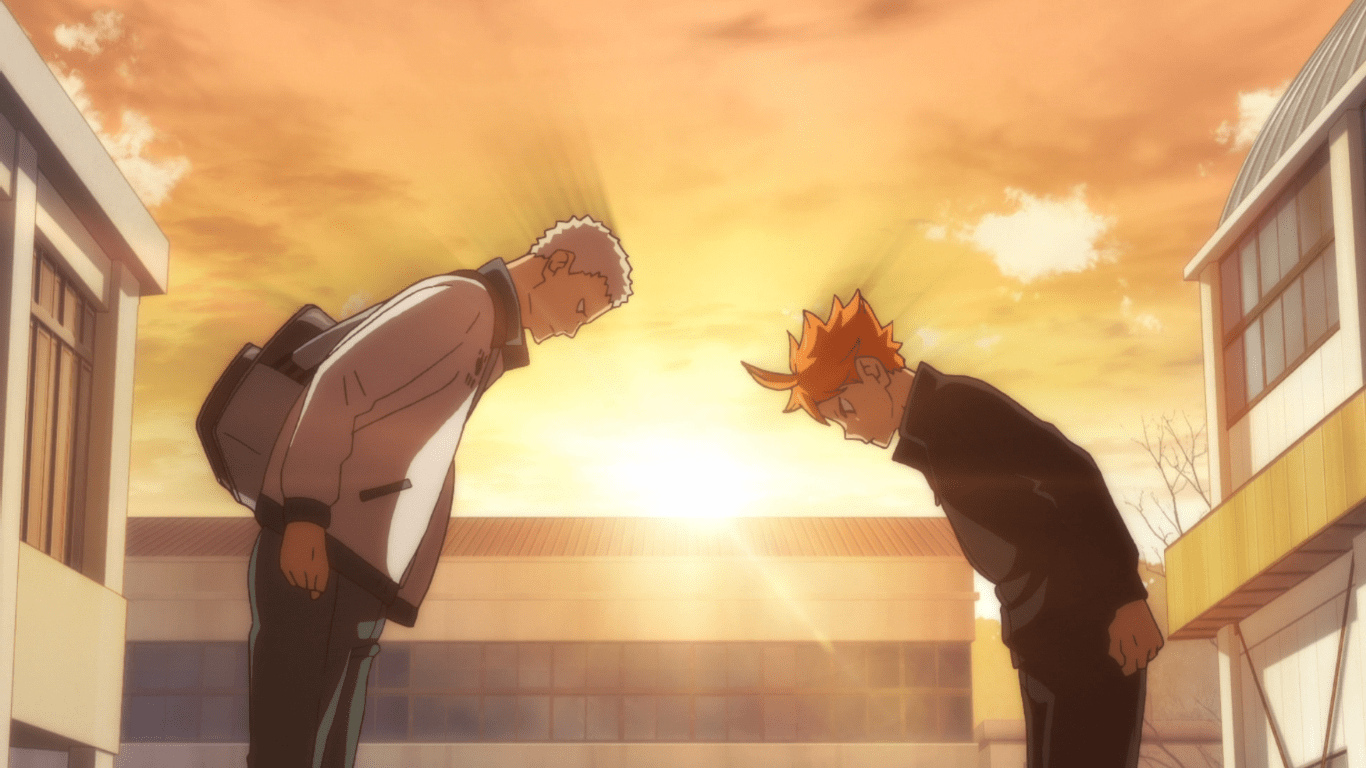 But it’s also great how Karasuno is constantly inspired by their opponents as well. I loved the little moment between Kageyama and Koganegawa where they were comparing tips (and the idea of Kageyama doing finger push-ups is amazing and I kind of want to see that). I’ve always gotten a kick out of the respectful relationship Hinata and Aone have had since that first match in season 1. And I couldn’t help but laugh at the third years trying to intimidate each other.

This feels like a lull in the story, because the plot isn’t advancing as quickly. But this is where Haikyuu!! shines – in the in-between moments where you can focus on the characters. It’s a big deal to me that everyone is noticing how much Hinata is improving. (That scene where he is playing with Natsu was so wholesome. That whole family is just sunshine personified.)

And of course, we have to mention Kageyama’s development. He’s remembering past advice that’s been given to him and seems to really be trying to pay attention to what his spikers need. After his near breakdown in the last episode, it’s good to see him trying to be more aware. He’s always had the drive to be better, so it’s totally understandable he would seek out Koganegawa and compare notes. 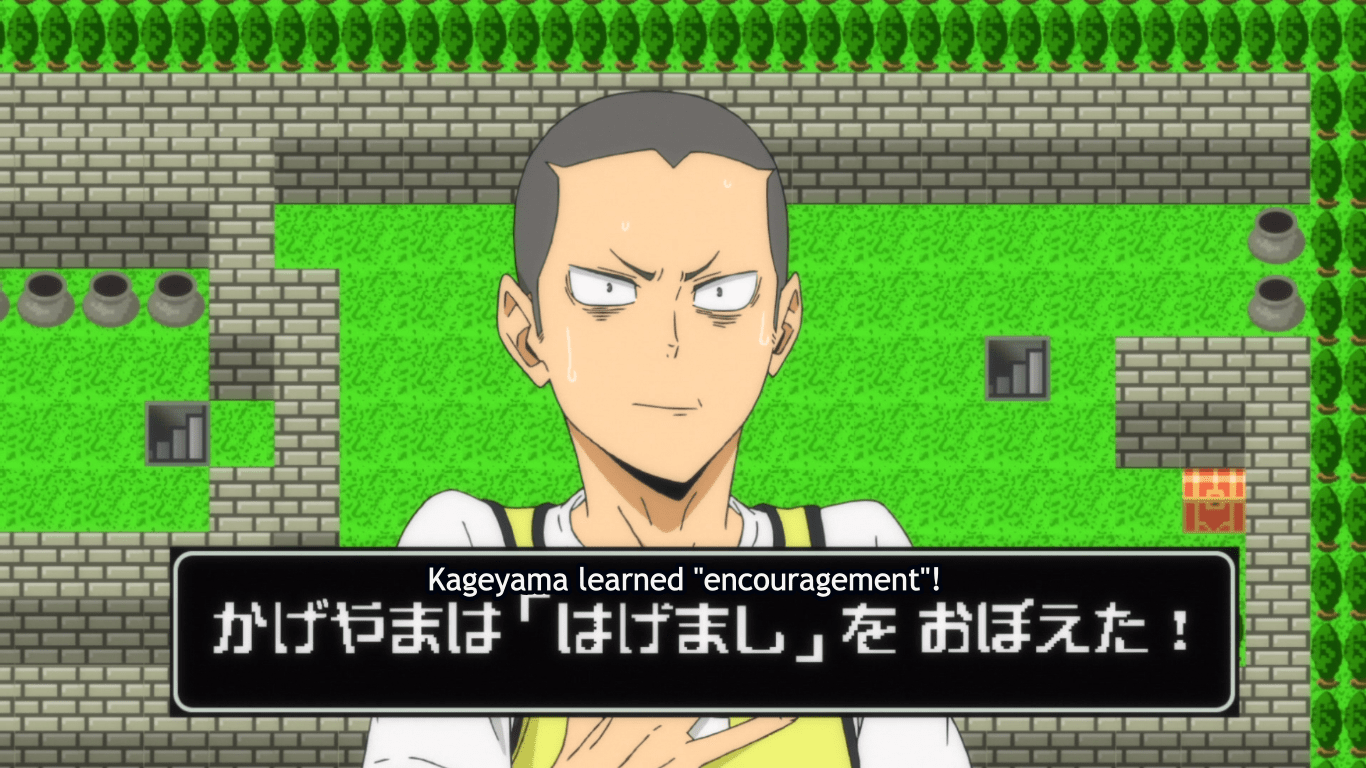 But it’s important to recognize that other characters are getting the chance to shine as well.

The most obvious example in this episode is Kinoshita, who has barely had any presence in the series until this point. He and Narita sort of exist as the other players on the team, but neither have really gotten the chance to show what they can do (except for that brief moment in time when Narita got to play against Shiratorizawa). I really like getting to see more of the other players, and I love that this series gives everyone the spotlight at least once.

Humor is an important part of Haikyuu!! and there were a lot of great moments in “Challenger”. Tsukishima’s evil cackle and Sugawara asking what team he’s on, Kageyama claiming Asahi’s point because he chose him to attack, the Dateko third years ragging on Futakuchi, Hinata taunting Natsu… This is a show I have to devote my full attention to, because a lot of really great stuff happens in the background.

I definitely noticed the animation in this episode, but I’m trying not to focus on it. I really do love this show, and I can live with lower-quality animation just to see my boys back in action.

We’re gearing up for Nationals now, and we’re so close I can taste it. This is where things start to get really exciting, and the pace will surely start to pick up.

Have you seen “Challenger”? What did you think?