I didn’t expect to be reviewing Haikyuu!! weekly, because I didn’t think there would be enough for me to talk about every week. But honestly, ever since this all-star match started, it’s been nothing but constant fangirl flailing. And in Haikyuu chapter 386, WE FINALLY SEE NISHINOYA.

I was fully prepared not to review Haikyuu chapter 386. I pulled open my Shonen Jump app thinking, “There can’t possibly be that many more surprises in store, can there?” And then BOOM, out of nowhere, we FINALLY learn where Nishinoya has been, and why he’s not at the game. I knew as soon as I saw him that I’d be reviewing this week’s chapter.

Fans have been waiting for Nishinoya to make an appearance for months, and I’m pretty sure that when I scrolled over and saw him, I made a noise only dogs could hear. Nishinoya fishing for marlins (something probably the same size as he is) in Italy is such a Nishinoya thing to do, but at the same time, I’m a little sad he didn’t stick with volleyball as a career.

Then again, even though he’s quite skilled and very loyal to Karasuno, he never really seemed as devoted to the game as, say, Hinata and Kageyama. And he has always given off a very “free spirit” kind of vibe, so it makes sense he would not want to stay in one place for very long.

It’s quite nice that he keeps in touch with Asahi. As someone who drifted away from most of her high school and college friends, it’s always very touching to see friends that make the effort to stay in contact.

But, oh yeah, there’s still a match going on.

Haikyuu chapter 386 continues to show Hinata’s improvement. He’s been pretty impressive for the entire game, to be perfectly honest, but I don’t think we can easily discount his overhead receive (remember, Hinata was always the worst at receives). Plus, his spike-to-quick-set fakeout at the end of the chapter gave me strong Oikawa vibes. If I’m not mistaken, Oikawa did something similar in one of their matches.

In fact, I think it’s that last move that really hammers home just how much Hinata has grown as a player since the beginning of the series, considering he didn’t even learn how to do “dinks” until Bokuto taught him how at the Tokyo training camp. But it’s also that last move that illustrated perfectly the chapter’s title: “Freedom”. It’s something that Hinata has likely been thinking about since they played against Johzenji. “Free to play, free to have fun.” But it’s something you can really only achieve when you have the talent and skill to back it up.

(And, suddenly, it’s not that surprising that Terushima is one of the alums who has made an appearance, even though we haven’t seen, like, anyone from Nekoma except Kenma.)

I will say, as much as I’m enjoying Hinata pulling off these surprise moves, I miss that we didn’t get to see the development that led to them. The groundwork could have been laid without revealing the final product, so we can still have the jaw-dropping moment without missing everything that built up to it. This is why I don’t like time skips.

That said, one thing I really like about this chapter is, even as we see Hinata being amazing, we’re also reminded he is far from the only good player on the court, and we get a big reminder about that at approximately the same time as Hinata. I have a hunch that Ushijima put a little bit of extra power into his spike when he saw Hinata would be in position to receive it. He hasn’t forgotten their match in high school.

I also like the slight callback with Bokuto doing the chest receive that we saw him do during Nationals. Because it’s refreshing to know that even after all these years, some people never change.

Now I can’t help but feel we’re still a little light on Kageyama. I mentioned this last week but it deserves repeating. I have been waiting for Hinata and Kageyama to go head-to-head for years, and I currently don’t feel the rivalry is getting its dues. Kageyama has been a little too quiet during this match – aside from that nice little let that caught the Black Jackals off guard.

I expect the second set will focus more on Kageyama and the Adlers, since this first set was so heavy on Hinata and the Black Jackals. Plus, we haven’t yet gotten to see the powerful serve that netted Kageyama four service aces during the 2016 Olympics. There is still a lot of volleyball left to be played. 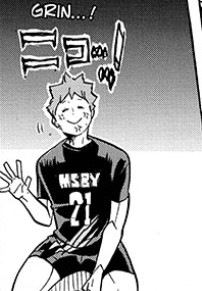 Have you read Haikyuu chapter 386? What did you think?