Haikyuu Chapter 385 Manga Review: “It Got Me Pumped but at the Same Time Made Me Jealous”

After a brief hiatus, we’re back to the match between the Black Jackals and the Adlers in Haikyuu chapter 385. “It Got Me Pumped but at the Same Time Made Me Jealous” continues to bring back some familiar faces as well as explain what it is about Hinata that’s so special (in case you didn’t already know).

Haikyuu chapter 385 emphasizes why Hinata has become such an important part of the Black Jackals in such a short amount of time, and it’s entirely due to his beach volleyball training in Brazil. Hinata, who learned early on in his career that he wanted to learn how to do everything on the court, is doing his utmost to be the best all-around player that he can be. He’s unpredictable – even more so than he was in high school – and that is what makes him dangerous.

The previous chapter showed how Hinata has honed his “decoy” reputation, by using his speed and agility to fool players into thinking he’ll be in one place while managing to get to another. “It Got Me Pumped but at the Same Time Made Me Jealous” shows that Hinata has taken his desire to learn everything to heart and can even set the ball.

As Tsukishima, Yamaguchi, and Yachi discuss, this all-around ability is what makes him such an asset to the team, and why they felt it was worth putting him in over a more powerful and experienced player. It’s kind of sad, that Hinata needs to do that much in order to have worth to a team, but it’s also a testament to his drive and passion that he was willing to put in the effort to do so. But then, it’s always been apparent that Hinata puts his all into his playing. 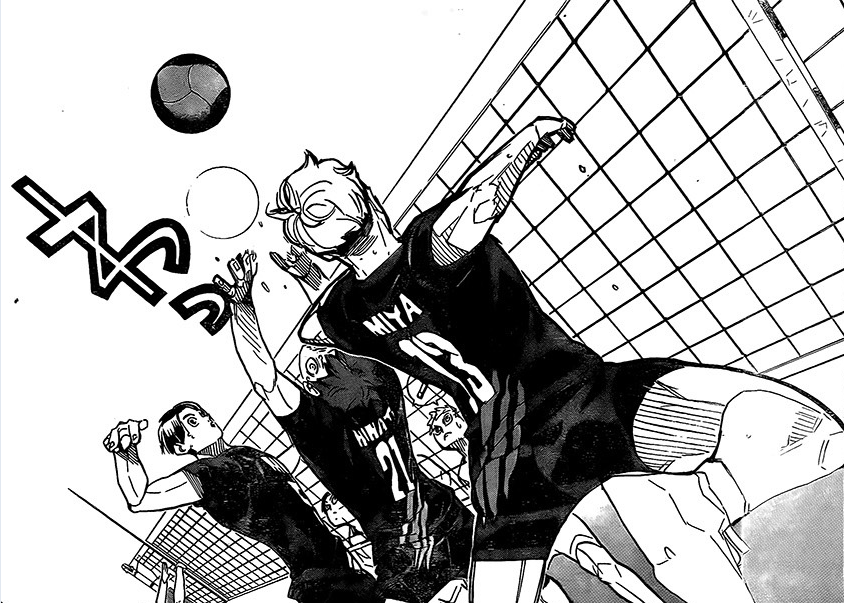 *wipes tear* I’m so proud of this boy.

One thing I’d like to mention, while we’re on the subject, is that Haikyuu chapter 385 is sadly too light on Kageyama. I really wanted to see Kageyama’s reaction to Hinata’s set to Atsumu, or really Kageyama’s reaction to Hinata’s anything in this chapter. At the end, we got a very brief shot of Koshiumi, but for the most part, the reaction shots came from the spectators (which now include several Dateko alums as well as Hyakuzawa).

Although I am living for seeing Tsukishima’s jealous face so often.

After so long of wanting to see the effects of Hinata’s Brazil training, I can’t say I’m that upset that he’s been the focus of many of the recent chapters. But I still am I little disappointed that we’re not seeing as much of Hinata and Kageyama’s rivalry as I’d like. To me, their relationship is the backbone of the series, and this is the perfect opportunity to illustrate the never-ending competition that exists between the two of them. I’d like to see that taken advantage of more, now that they’re older.

I love seeing how Hinata’s playing has developed and matured over the years, but I feel like we aren’t seeing enough of Kageyama. Plus the match is advancing much faster than I anticipated, as the score is already 21-17 at the end of the chapter. There’s enough reason to believe that even though this is the final arc that this isn’t the final match; many fans (including me) have speculated that there will be a tie in to the Tokyo Olympics (provided they don’t get postponed or even canceled due to the Coronavirus).

That being said, I do wish Furudate would slow the pace a little. We didn’t get to see this development happen naturally, and we are well overdue for a flashback (those little one-panel scenes don’t count). I realize this is hilarious, considering how many times I whined about how long a match was taking (the game against Nekoma seemed to go on forever), but in this case, I’ll make an exception.

Have you read Haikyuu chapter 385? What did you think?