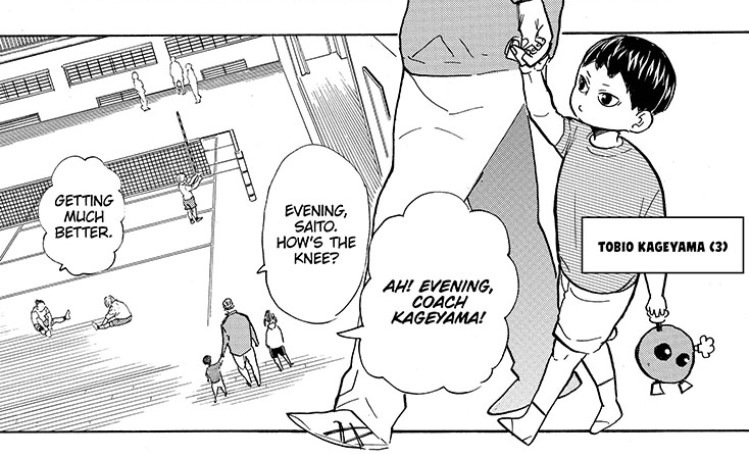 For the past several weeks, I have been lamenting the lack of Kageyama in the Haikyuu chapters, and here Haikyuu chapter 387 is all about Kageyama, including flashbacks. “The Greatest Opponent” is a great chapter for all Kageyama fans, and everything I’ve been waiting for.

After all the action of the past few chapters, I am loving the abrupt shift in Haikyuu chapter 387. Mostly because I love Kageyama, and I’m so excited to get some more backstory for him. Aside from Hinata, I feel he’s the character that we know the most about, but he hasn’t gotten the chapter-focus the way many of the other characters have gotten. So I was very happy to see that the entire chapter was about him.

It should surprise no one that Kageyama has basically been a volleyball fan since birth, but that doesn’t make the panels where a baby Kageyama hugs a ball any less cute. Nor do the flashbacks make his middle school experience any less tragic. In fact, I teared up reading those panels.

I have always felt bad for Kageyama. I’m sure he wasn’t the easiest person to deal with, but if you look at what he had to go through… He idolized Oikawa, and Oikawa resented him. And he’s too socially awkward to adequately convey what he wants to say, and he ended up alienating his middle school teammates. And even on a powerhouse team, he was usually practicing alone. 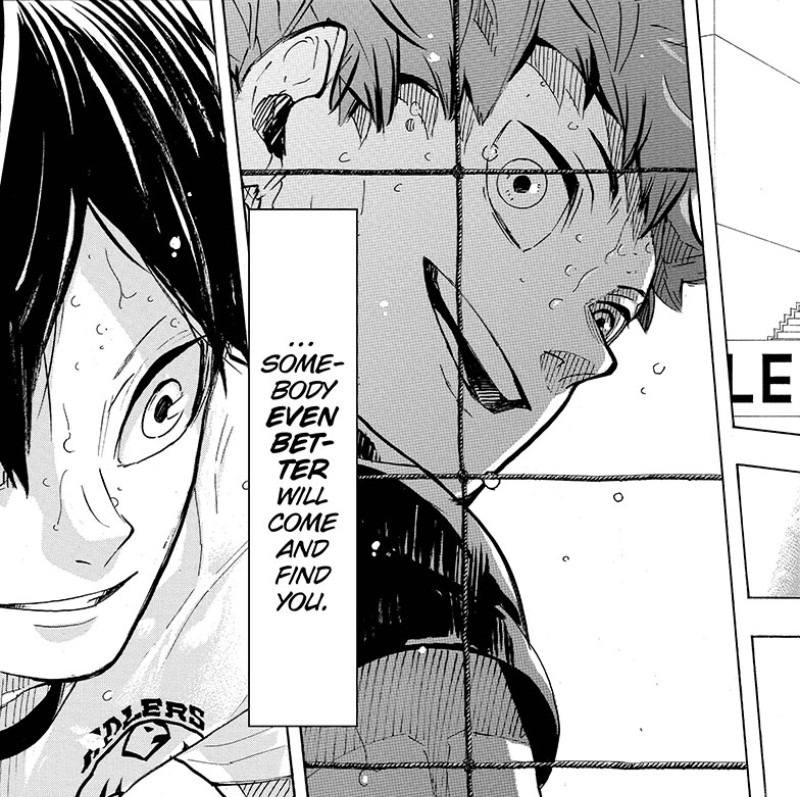 In that sense, he and Hinata had very similar paths to Karasuno. Hinata started later than he did, but he had to do everything on his own, and only got to play in a match because his friends did him a favor. “The Greatest Opponent” reveals a lot of similarities between Hinata and Kageyama that we never knew about before.

For example, Hinata has a habit of breathing in the gym when he first sets foot on the floor and remarking that it smells like “air salonpas“; Kageyama says that his favorite thing about the gym is the smell. Hinata wants to stand on the court longer than anyone; Kageyama chooses to play setter because he wants to touch the ball the most.

It really makes you wonder what would have happened if they had met earlier, or been on the same team before high school. I mean, it would be a totally different story, so I’m glad we’re getting the one that we’re getting, but still.

Haikyuu chapter 387 also just really, really increases my need to see what post-time skip Iwaizumi is up to, and also to see where Oikawa ended up.

This chapter highlights exactly why Kageyama and Hinata’s partnership was so spectacular, and why their relationship has been the cornerstone of the series. They are a set. They are two sides of the same coin. They bring out the best in each other, and they bring out the competitive spirit.

Have you read Haikyuu chapter 387? What did you think?