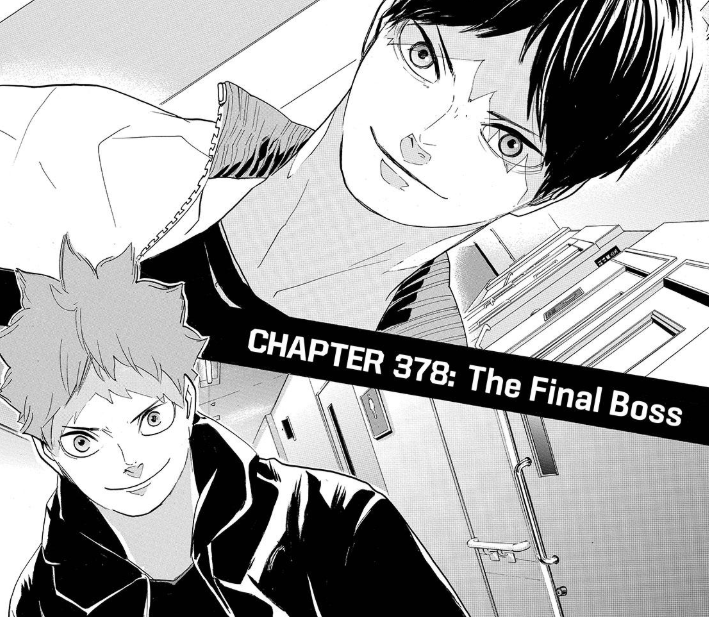 After I got over the time jump, I’ve been enjoying the new arc immensely, but Haikyuu chapter 378 features another (smaller) time jump, and now I worry that we’re hurtling too rapidly towards this manga’s inevitable end. I mean, it’s there in the title – “The Final Boss”. That sounds pretty definitive. There is so much to explore in this new arc, so can we please get off this highway and take the time to enjoy some sights along the way?

Haikyuu chapter 378 starts a few months after the last chapter left off, and Hinata is officially a member of the Jackals. On the one hand, this is great, for all the reasons I mentioned in my review – Bokuto and Atsumu and their prior relationships with Hinata make the most narrative sense to be his teammates. On the other hand, we didn’t get to see their reunions, his tryouts, or how his time in Brazil learning beach volleyball affected his indoor volleyball skills.

It’s already been stated that this is the final arc, but we’re moving towards the endgame much faster than I wanted. I both do and don’t want to see this match unfold, because I’ve been waiting for years for it, but also because I love Haikyuu so much, and I don’t want it to be over. 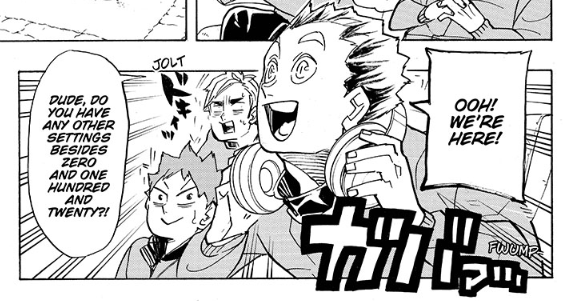 I wanted to see this dynamic develop.

If I didn’t know any better, I’d think that Furudate was trying to make sure that the characters are at the 2020 Olympics by the time the 2020 Olympics happen. They are, after all, in Tokyo, and I’m sure there’s not inconsiderable pressure from a marketing standpoint.

This manga is at its best when it focuses on its characters, and I’m disappointed we’re missing prime character moments in order to move the story forward. Yes, I squealed pretty much the entire way through “The Final Boss” because the gang is getting back together (except Karasuno’s second years, who hopefully will be reintroduced in the next chapter), I can’t help feeling sad that there wasn’t at least a little bit of time devoted to Hinata training with his new team. His dream was to play professional volleyball, and we didn’t even get to see him react to making the team?

Hopefully, we will get to see these moments in flashbacks during the match, but it still upsets me how fast we’re moving through this final arc. This is the end, y’all. We’re really approaching the end of Haikyuu, and I’m sure I’ll be an emotional wreck during every chapter from here on out.

That said, there are some good character moments in “The Final Boss”, just not from where I expected. For example, seeing most of Karasuno reuniting to watch the rematch between Kageyama and Hinata is amazing. Learning that Tsukishima, who didn’t really like volleyball and considered it “just a club”, continued to play after high school hit me harder than I thought it would.

Also, I’m pretty sure I’ve read fics where Suga became a teacher and Daichi a policeman, but I never saw Asahi being a fashion designer.

I just really wanted to see this stuff happen. We’re getting all the points but none of the buildup, and as much as I love seeing it, it rings a little hollow. 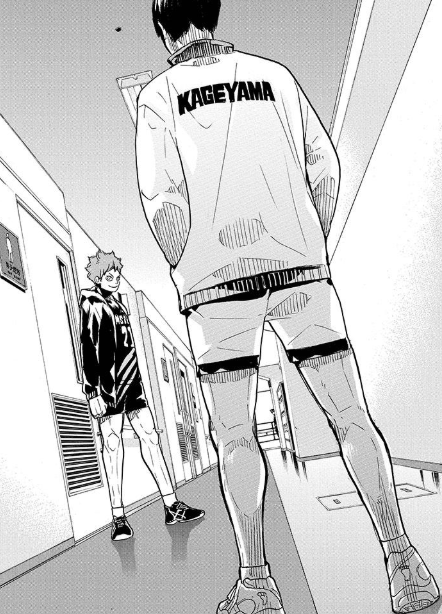 Back where it all began.

But of course, the centerpiece of Haikyuu chapter 378 is that they’ve reunited – Kageyama and Hinata. We’re back where we started, with them facing off against each other. They even ran into each other at the bathroom because Hinata running into powerful players at the bathroom is a running joke that has to continue into eternity. These two are the emotional core of this series, and I’m not sure I’ll be able to handle this upcoming game.

At the same time, this is the pinnacle of Hinata’s entire life. Please make this match last as long as it needs to in order to give it a satisfying conclusion.

Have you all read “The Final Boss”? What did you think?