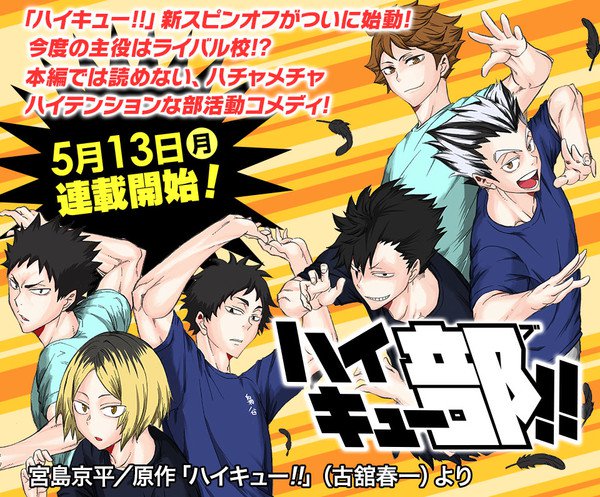 Haikyuu!! fans who simply can’t wait for the next season of the anime have something else to tide them over until then – a brand new Haikyuu spinoff manga series has been announced!

The official Shonen Jump+ website has revealed that a new Haikyuu spinoff manga will debut in the magazine on May 13. Drawn by Kyōhei Miyajima, the spinoff will be called Haikyubu!! and is described as a “high-tension club activities comedy” that will focus on the rival schools featured in Haruichi Furudate’s original story.

There is precious little news about Haikyubu!! so far other than the brief description and the associated preview image. Considering the manga is being drawn by a different artist, it is unknown the extent Furudate-sensei will be involved in the project, if at all.

While VIZ Media simulpublishes the current manga on the same day it’s released in Japan, there’s no mention of whether or not VIZ Media will be publishing the spinoff.

Pictured in the image are Oikawa and Iwaizumi from Aoba Josai, Kuroo and Kenma from Nekoma, and Bokuto and Akaashi from Fukurodani. It stands to reason that those three schools at least will be a part of the new Haikyuu spinoff.

Oikawa and Iwaizumi are my lock and home screens on my phone, so I fully support any and all opportunities to see them in action again. And my love for Bokuto and Akaashi knows no bounds so learning more about them will be amazing.

But I hope we can expect to see some of the other rival school as well, especially those who didn’t get as much development in the original manga due to the length of the matches. For example, I would love to see more about Kukagawa’s giant first year Hyakuzawa, particularly after the training camp arc.

As for Haikyuu!! season 4, we’ve got less than five months until the kickoff event, when we’ll hopefully get an official trailer and release date!

The Haikyuu spinoff launches in just a couple of weeks. What schools or characters are you most excited to see? I’d love to hear your theories!

Previous:Boruto: Naruto Next Generations 1×104 Review: The Little Roommate
Next: Attack on Titan 3×13 Review: “The Town Where Everything Began”