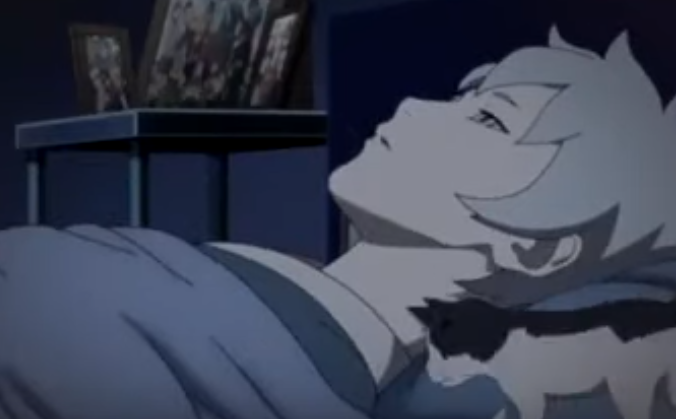 Mitsuki and the kitten in ‘The Little Roommate’ (Image: Screengrab)

If you have been waiting for an episode where Mitsuki tries to take care of a kitten, then ‘The Little Roommate’ is definitely for you. Having more Mitsuki in a story is never a bad thing.

With the previous Curse Mark arc being quite action-heavy, I appreciated ‘The Little Roommate’ taking a more laid back approach. The plot was about some thief (I didn’t care enough to remember his name) evading capture after stealing a diamond. Even Boruto and his team couldn’t stop him. However, while in pursuit, the kids found an abandoned kitten and Mitsuki ended up being the one to take care of it.

Mitsuki has a lot to learn about how the world works because he grew up in Orochimaru’s lab. He is okay with taking care of snakes, but kittens are a different matter. He didn’t even know what to feed it! I had fun seeing the young ninja trying to connect with the little feline.

‘The Little Roommate’ made it clear the kitten was connected to the thief somehow. So, it was only a matter of time before the thief came back for it. The episode revealed he had hidden the stolen diamond by making the kitten swallow it. Mitsuki and the others were able to figure it out and keep the tiny animal safe.

I also liked how the Konoha Police Force wasn’t shown to be incompetent. They were suspicious of the thief hiding from them in plain sight and helped Boruto and his team near the end of the episode.

Of course, Mitsuki had to give the kitten away when the mother cat showed up. However, I appreciated the writers allowing the kitten to come and go from Mitsuki’s apartment. I wouldn’t mind seeing it again in some other filler episode down the line.

‘The Little Roommate’ showed Mitsuki still slept with Boruto’s picture on his bed. I mean, come on! I want the writers to talk more about their relationship. Judging from the preview of episode 105, maybe they will?

What did you think of Boruto this week? Did you enjoy ‘The Little Roommate’? Let us know.