Grayson #5 Review – We All Die at Dawn 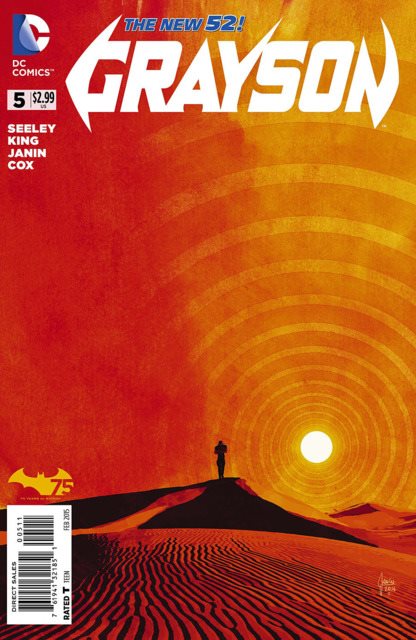 Issue 5 finds Dick, Helena and Midnighter with a woman about to give birth in a helicopter that is in the process of hurtling to the ground. Talk about excitement! Grayson has been trying to stop Paragon from using body parts from a villain for his own nefarious plans. The baby being born has the heart of this villain inside her.

The helicopter does crash. Helena is injured and the mother of the baby has died. What happens next makes this Dick Grayson fangirl happy to see. We have Dick carrying a baby and valiantly protecting and caring for her. Midnighter doesn’t care much for the baby, Dick or Helena and proves to be a problem (he is finally able to see through Dick’s hypnosis and discover his identity) as they trudge through the desert with not much more than a little water and baby formula to survive.

This issue mostly covers a long trek through the desert and the conversations the characters have before they drop one by one as they run out of strength. This story is more about Dick and who he is as a person than it is about the action of the story, even if it does start out quite intensely. That’s not to say that the story is lacking for any action. We get great insight into what Dick is going through being separated from his family and thought to be dead by many who are important to him.  He’s undercover and he’s helping Batman, but the mission is not more important than who he is. He perseveres with all the odds against him, even when Helena can go no farther due to her injuries and Midnighter threatens him and the baby. Dick is the last one to fall while telling the baby a story about his life as Robin with Batman. It was strength of will and character that kept Dick going beyond his physical endurance.  They are rescued in the end by a couple who happened to pass by and are taken back to Spyral to recover.

I love how every issue of Grayson has had either a conversation between Bruce Wayne and Dick Grayson, or a story about Dick’s life with Batman. The Batfamily is my favorite things in the DC Universe. I don’t like to see Dick so separated from them. I’m glad the writers have made sure to keep that connection. Gratuitous? We get nearly an entire issue of Dick Grayson walking through the desert with his shirt off, holding a baby. Thank you, comic book gods!