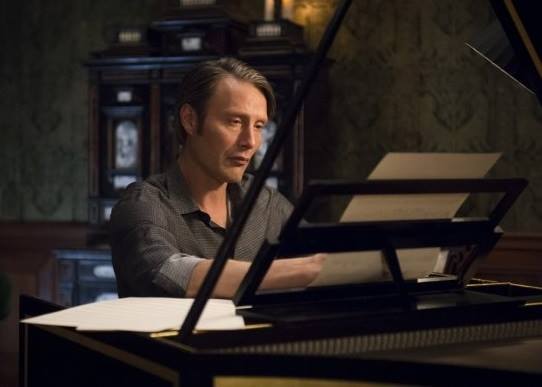 “The last time someone rang my door bell this early, it was a census taker.”  Mr. Fuller, you fan-service so well it hurts.  This episode was a pretty explosive mid-season episode, leaving my mind sufficiently blown at the end.  After this episode, Hannibal knows Will is quite beyond his scope of manipulation and the game of cat and mouse can truly begin. Jack is starting to suspect Hannibal, driving a wedge between himself and Alana as a result.  But before I give anything major away in my introduction, let’s jump into my thoughts on “Futamono”!

Is anyone else amazed how well Hannibal is able to maintain his façade of humanity?  Seriously he could give Dexter Morgan some tips.  Throughout this episode, he played the role of the victim so well that if the audience didn’t already know his secret, they would have been on his side with Alana in thinking it impossible to him to be a killer.  But the beauty of this show is that we do know, which makes it all the more frustrating/entertaining for us that the characters surrounding Hannibal don’t yet.

In the beginning of the episode, we found Hannibal composing a piece of music to help himself “cope” while Will received a visit from Jack Crawford, who was none too pleased at the aspect of Will’s possible involvement in Hannibal’s attack.  Will is practically bubbling with emotion, filled with “the happy anticipation of being able to feel contempt”.  He is ready to be vindicated, for everyone else to see what he had seen long before.  The exchange Jack and Will had shades of the last interaction between Clarice and Hannibal at the end of Silence of the Lambs (forgive me for the constant references, but I am a huge fan of the source material and always love the little hints and nods the writers give it).  Unable to hold back now, Will told Jack that if the Ripper is killing again, then Hannibal will be throwing a dinner party.  He ends the conversation with asking Jack who the Ripper has to kill before Jack will start to believe Will.  I think all this goes back to something Jack said near the beginning of the season.  He doesn’t want to believe that he could have been so wrong and missed so much.  That would mean Katz’s blood is on his hands, at least in his mind. 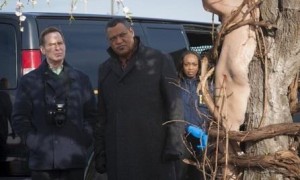 Will’s theory is only further proven when we find Hannibal telling Alana how “wrecked” he is about finding out how Will was involved in what happened to him.  But what could possibly be a solution to his skewered heart?  “I need to get my appetite back,” he says, cuing a montage of him flipping through recipes and business cards, intent on finding his next victim.  This tableau is pretty grotesque but fairly bulky as well.  How the hell was Hannibal able to move this into place all by himself?  It’s not like he would be able to ask for help.

Speaking of asking for help, after the FBI’s discovery of the body, Jack was at Hannibal’s house, seemingly ready to do the same thing.  But this time, Hannibal declined, saying he can’t focus on death anymore.  I think it might have served him better if he had put some distance between himself and the BAU earlier or perhaps even stayed away after Will was arrested in the first place.  But then we wouldn’t have a show, now would we?  We could practically see the light bulb flash above Jack’s head when Hannibal mentioned throwing a dinner party.  He was given even more incentive when Chilton played back a conversation he had recorded between Jack and Gideon, where Gideon showed he remembered more of that night with Will and Hannibal that he had previously led people to believe.  It was a little odd seeing Jack work with Chilton rather than treating him like an idiot.  In fact Chilton showed a few moments of insight throughout this episode.

Back with Team Sassy Science, they found some diatoms from a water source somewhere within a fifty mile radius of Richmond.  Jack and Alana met, and Alana, once Will’s champion, has become Hannibal’s, unable to believe the things that Will is saying about him.  I can’t help but feel sorry for her and worry about how she will be effected when the truth of who Hannibal truly is comes to light.  Will she feel a sense of guilt, wondering how she could have been so wrong?  I think of the people involved in this case, Alana might be the one hit the hardest.

The scene between Will and Hannibal was quite chilling in its implications.  Given what we find out later in the episode, I think this meeting was Hannibal’s way of saying, “The game is on, Will.”  In Hannibal’s eyes, what Will did was unspeakably rude and I think he wants to torment Will before giving him his punishment.  The thinly veiled threat against Alana was practically dangled in front of Will, as if to say, “I have someone else you care about, so do be careful.”

Major props to Eddie Izzard for another fantastic performance as Gideon.  His meeting with Jack and Chilton was quite entertaining, especially the dig at Chilton that “the term sociopath hasn’t been used by any respected psychiatrist since 1968.”  Ouch, Dr. Chillton, would you care for some ice for the burn?  Gideon made Chilton look like quite the idiot, which makes me really look forward to Hannibal being placed on Chilton’s “care”.  I’m dying to see the ways in which he will put Chilton in his place.  Unfortunately Gideon let his mouth run away from him with his jabs at the nurse he murdered.  He was struck with a baton and tossed over the railing onto a cage where an orderly was sitting inside.  But that scene finally led us to the main event: Hannibal’s dinner party!

Jack and Chilton’s little pow wow was pretty funny, and Chilton’s face as he surveyed the food was priceless.  I had another dorky moment when Chilton said, “Hannibal the Cannibal…that’s what they’ll call him, you know.”  Hearing that made me eager to see the kinds of articles that Freddie Lounds will come up with, given how closely she’s been following Jack and anyone connected with him.  I don’t think anyone really expected the to-go box ploy to actually work, but the look on Hannibal’s face almost looked like panic.  But I think it was more for show than anything else, given that wink he gave Chilton after Jack left.  It felt like he was saying, “I know what you two are trying to do, but it’s not going to work.”  I think the Hannibloom shippers were pretty excited at seeing their two characters finally hook up, but unfortunately it was just a manipulation so that Hannibal could get Gideon, who was another loose end that needed to be tended to quickly.  It almost made me wonder if Hannibal had somehow paid off the guards to injure Gideon so he would have a way to get to the man. 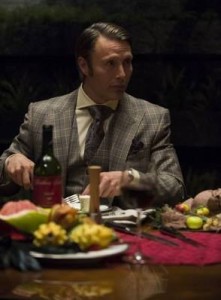 This episode was just filled with nods to the source material, which I adored.  The dinner between Gideon and Hannibal was just like the scene at the end of Hannibal the book/movie, where Hannibal was carving small bits of Krendler’s brain out and serving it to him.  Alas I believe this is the last we will see of Dr. Abel Gideon.  Eddie Izzard gave us quite the entertaining villain, and I’m a bit sad to see him go.  I’m interested to see what kind of tableau Hannibal dreams up for him.  Hannibal left the security guard watching over Gideon at the asylum strung up above the bed by fish hooks, which provided some very interesting evidence.  He took credit for the deaths of the Muralist and the judge at Will’s trail along with Will’s four supposed victims.  Again, I think this was a ploy to free Will so that Hannibal would have easier access to him when he decided to exact his revenge.  One of the lures held another interesting clue: bark from a rare tree that grew within the radius Sassy Science had set up earlier.  This led to the location of a building in the middle of nowhere, which led Jack to the discovery of Miriam Lass alive!  This wasn’t much of a surprise, as NBC oddly split the beans in their released synopsis of the episode, but it was plenty shocking to Jack.  The way he found her obviously was a nod to Silence of the Lambs’ Buffalo Bill and the way he held his victims.  Now this begs the question: did Hannibal purposefully lead Jack and his team to Miriam, and to what end?  He knows what kind of people Jack has working for him and how intelligent they are.  Perhaps this is all just a game to him, a way of entertaining himself by pitting himself against the FBI’s supposed best and brightest.  Whatever he’s playing at, it’s a dangerous game that, as we well know, Hannibal will lose.

Next week looks to be quite exciting, as Will is free at last!  The preview looks pretty thrilling, and as always, I’m eager for the next episode.  My cousin, once we had finished this episode, kept fast-forwarding, saying, “I want this to be a two hour episode!” What are your thoughts?  Favorite and least favorite moments?  Whatever they are, comment below and thank you for reading!