Last week Will voluntarily ate a person.  We were led to believe that person was Freddie Lounds, though many theorized that might not be the case.  Regardless of the outcome the point is he knowingly resorted to cannibalism.  That’s a road that’s hard to come back from and Will’s character is changed in our eyes forever no matter where he goes from here.  It was incredibly shocking.  They promised us that this week would be even more shocking, which is almost unfathomable, but whenever this show makes that promise it tends to live up to it.  Indeed, this week they turned the tension up even higher.  For a show about brutal murder, this episode made me extraordinarily uncomfortable and managed to surprise me on many levels. 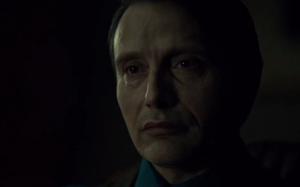 An ongoing theme of this episode was children.  The most obvious display of this theme was Margot’s expected child, which was conceived as a tool for Margot to claim the family fortune.   Will and Hannibal also spent some time talking about Abigail, which they both show a great deal of emotion about.  Hannibal’s relationship with emotions is hard to pin down, but if he can feel connections with anyone it seems he did have some sort of connection with Abigail.  This might have something to do with the third child discussed in the episode; Hannibal’s young sister Mischa.  Abigail reminded Hannibal of her, which made him more empathetic towards her than he is most people.  His strong interest in Will may also contribute to his guilt over her death as Abigail was essentially Will’s Mischa.  She wasn’t his daughter, but she was his charge, much in the same way Mischa was Hannibal’s.   The discussion between them about Abigail and Mischa was the most emotional scene I’ve witnessed in the series so far.  Hannibal was almost human and completely open with Will about his thoughts and motivations.  He admitted regret and showed sadness.  It almost makes you forget what he truly is, which makes him even more dangerous than he ever has been before.  The term “sympathy for the devil” comes to mind.

Margot’s child suffered the same fate as Mischa and Abigail.  In this case it was terminated before it ever had a chance to be born. What happened to Margot afterwards was horrific.  Not only did she lose her child, but any chance of having children in the future was stripped from her, guaranteeing that she’s trapped in her horrific predicament forever.  If her brother dies, she’s destitute.  There’s no escape and her body has been violated against her will.  Her storyline has disturbed me greatly, which is really saying something for this show.  We see horrific murders every single week, but having Margot’s reproductive rights torn from her against her will made me squirm.

Alana is extremely clever.  Her intelligence has never been in question for me.  Hannibal is a master manipulator so her not being able to see beyond his lies at first isn’t something I truly blame her for.  Throughout the episode it was clear that she was seeing the first signs of Hannibal’s unhealthy influence on Will, though her primary suspicion was still misplaced on Will himself.  She was unraveling the mystery, though, and would have likely gotten to an accurate conclusion on her own.  Jack saw the path she was traveling down and revealed that Freddie Lounds is alive, thus bringing her into the fold.  How much they’ll tell her, I’m not entirely sure, but I strongly suspect we’ve seen the last intimate scene between Alana and Hannibal.  As with all things related to Mads Mikkelsen’s portrayal of Hannibal, this causes me a lot of conflict.  I’m not going to lie here; the sex scene from the last episode was incredibly appealing to me because of all parties involved, so I will mourn the loss of those glorious scenes.  From a narrative standpoint, though, this is for the best. 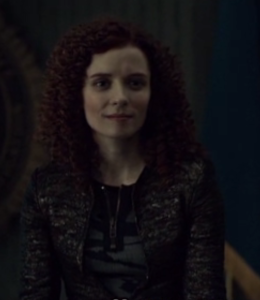 Fans have been speculating that Freddie was alive all week long.  When they revealed that her dental records matched that of a corpse and they had a funeral for her I truly thought she was dead.  The flaming corpse in a wheel chair (dubbed ‘Hot Wheels’ by the crew) also paralleled Freddie’s male counterpart’s death in other versions of the work, so I was pretty convinced that the fan speculation was just wishful thinking.  Now’s the moment where I admit that I was incredibly wrong and hang my head in shame.  As manipulative as Freddie can be, I do really enjoy her character so I’m actually quite happy to be wrong.

Now that we know that Hannibal has been renewed for a third season, I can rest slightly easier going into these final two episodes.  Don’t get me wrong, there’s still a lot to be concerned about.  There’s that whole Jack getting stabbed in the neck thing to look forward to.  We’ll most likely end on yet another devastating cliffhanger.  We’re going to be upset and we kind of have to accept that.  But at least we know that there’ll be more story on the other side of all of this.  It won’t be an open ended cliffhanger with no possibility of resolution.  So let’s head into these final two episodes with our heads held high and bracing ourselves for season 3.

Previous:Russia Rates “The Sims 4” Only For Adults
Next: Saddle Up for Denmark’s ‘The Salvation’