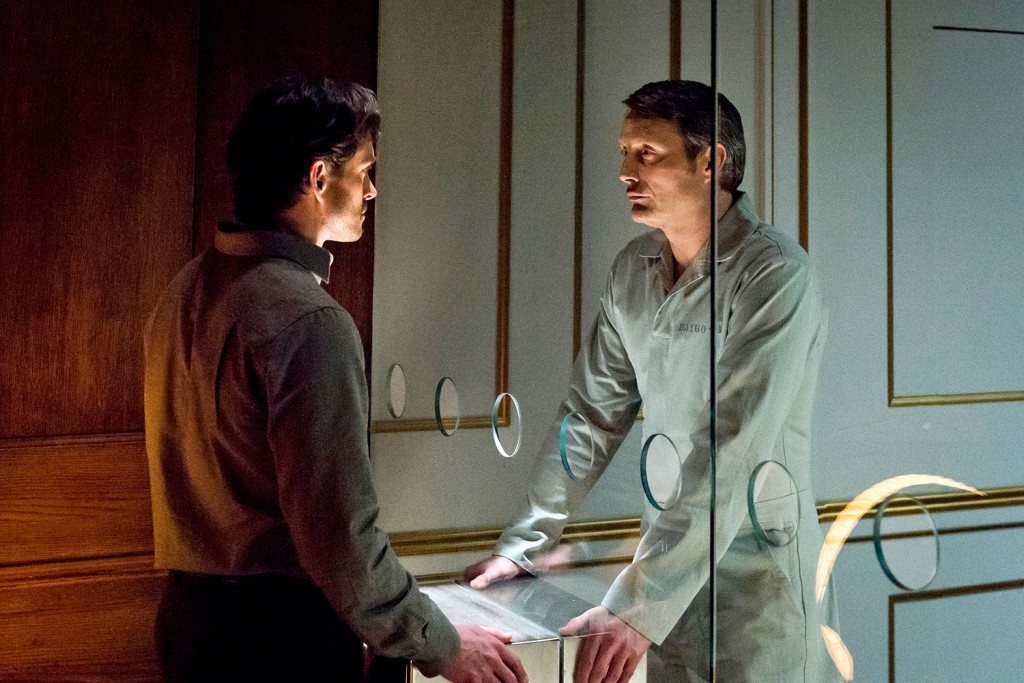 Once again I was unable to review last week’s episode in the time frame I’d hoped.  So congratulations, you get a double review again this week!

And the Woman Clothed with the Sun…

Alana carried the Verger baby, and she and Margot are raising him together.  All of my dreams have come true.  Murder Family v 2.0 is a reality and I couldn’t be happier.  I’ve always loved Alana, but I’ve grown even more fond of her after she survived her traumatic experience.  Some may see some her growth in a negative light.  Maybe she acts a bit cold, but she’s found a life partner, gave birth to a baby, and is able to see through the man who’d manipulated her for years.  She’s only grown stronger, in my opinion, and her ‘cold’ demeanor is a defense mechanism against the manipulation and abuse she went through at the hands of Hannibal.

‘Murder Husbands’ is also canon.  Thank you Freddie Lounds.  And thank you Bryan Fuller for once again proving that you are in tune with the fandom.  For our beloved Murder Husbands (aka the Original Murder Family) things are, to put simply, quite awkward.  Through flashbacks we see how Hannibal took Abigail, faked her death, and began to groom her as a murderous daughter.  When Hannibal made the remark about Will being a father to his partner’s child, there was surely some resentment behind it.  He and Will had a child and they almost all ran away to Europe together, but instead things ended in tragedy.

Tragedy is relative, I suppose.  Because, I mean, Hannibal is a murderer so rooting for him and Will to run off to Europe together with a child whose father murdered her mother and attempted to murder her… Not exactly a picturesque family.  But this show is just twisted enough that I was rooting for it.

The focus of the season is definitely family.  Alana and Margot have a family.  Will and Hannibal’s family was shattered and Will began a new one.  The Great Red Dragon is also tapping into this theme by murdering entire family units in cold blood.  And now he has Will’s new family in his sights and, well, this can’t go well.

And The Woman Clothed in Sun

Bedelia is sticking to her “I was drugged” story.  And she’s sticking to it well.  Bedelia also continued the theme of being very blatant about the extent of Will and Hannibal’s relationship.  She literally called Will his “bride.”  It was in the context of being the “bride of Frankenstein” but, like, wow dude.  Let’s just put that out there.  Why not?  Later she calls their relationship “intimate,” too.  I don’t even know how to analyze these scenes anymore.  They are so numerous and on the nose I wonder how the casual viewer interprets them.  I’m losing my mind over these scenes, you guys.  What’s happening here? 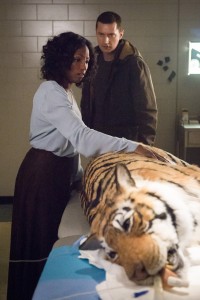 The biggest surprise for me was how much sympathy I gained for Francis Dolarhyde.  It doesn’t erase or excuse the horrible crimes he’s committed and will continue to commit, but it elevates the character above being a  two dimensional ‘bad guy.’  He treated Reba to an incredible treat by bringing her to feel the tiger while it was under a coma for dental surgery.  The sentimental nature of their relationship almost made me forget one of them was a serial killer.  Almost.  But Bryan Fuller does a great job of making sure you can never truly forget that these people, despite all the aspects of them that may make us sympathetic, are monsters.

The line between having a deep antagonist with sympathetic qualities and making excuses for the villains behavior is a thin one.  Nobody would argue that Hannibal is a monster, but the backstory about his sister adds depth, a point of understanding for one aspect of his character.  It’s not something that makes his actions remotely forgivable and it by no means lets him off the hook, but it elevates him above being a cartoonish mustache-twirling bad guy.  Reba does the same for Dolarhyde.  It gets closer to that line, though, because Hannibal’s sympathetic story line happened far in his past, leaving his current actions firmly in the realm of ‘evil.’  His love for Will Graham is a bit more present, but still features manipulation and underhandedness that balances out any sense of caring he displays for Will.  So far Dolarhyde has been incredibly kind towards Reba, making it easier to question whether he is truly ‘evil’ or just ‘damaged.’  It’ll be interesting to see how the narrative skirts that line in future episodes and if Bryan will continue reminding us that this man is, at his core, a murderer or if it’ll slip and he’ll become too sympathetic.

We’re nearing the end of season three, and I still refuse to believe that it’s the end of the show.  We need to keep being loud about #SaveHannibal.  It’s not over yet, folks.  There’s no nail in this coffin.  In the words of Martha de Laurentis, stay active.

Previous:An Interview with the Organizer of DestielCon
Next: Junjou Romantica 3×4 & 3×5: “Where There’s A Will There’s A Way” & “Even the Longest Journey Begins With A Single Step”