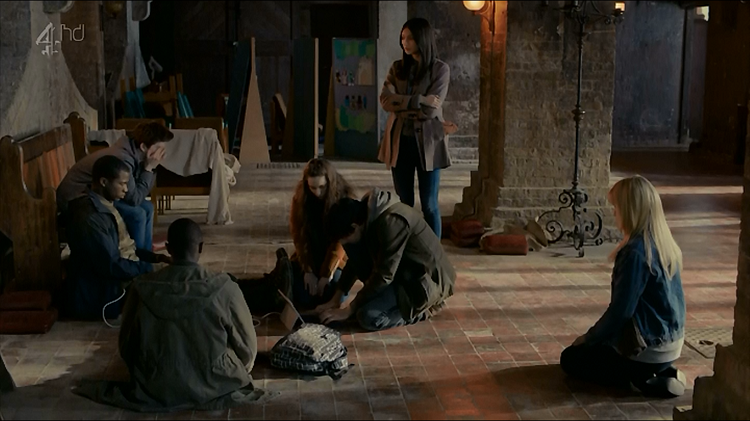 After the action-packed information dump of last week, this week’s episode of Humans was a bit disappointing, especially because it was the season finale. As finales go, it felt rather lackluster and anti-climactic; more about setting up potential plotlines for season two rather than tying up existing plotlines of season one. The acting was spot-on, as per usual, particularly Colin Morgan, who seems to be the only character who is given anything that requires real emotional range. However, the writing was a bit choppy and ill-defined, full of sudden and inexplicable personality switches.

Despite their reservations after last week’s revelation that Niska had brutally attacked a group of people, the Hawkins family seems to have gotten over themselves and is determined to rescue Mia and the others, going so far as to break the law to do so. This is one of those sudden switches that I was talking about. Was it their treatment by the police that convinced the Hawkins family that the special synths are not the bad guys? Did it make them realize that humans are often no better? Whatever the reason, everyone in the family is now on board with making sure that Leo and the synths are safe from whatever it is Hobb was planning to do to them.

Though we are still in the dark about who hired Hobb and what exactly is going on there, we have finally learned his motivations for tracking down our special synths – and it is just terrible. As Hobb demonstrated with poor Fred, he 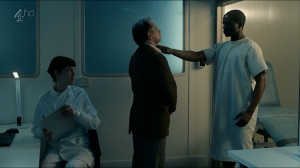 intends to make a line of synthetics that can think and feel but are still programmed like “normal” synthetics, as in completely obedient to their primary users. As Fred points out, Hobb intends to make synths slaves, trapping them in their own minds. The ethical ramifications of an experiment like that are simply staggering, but the people who have hired Hobb seem to only care – as most villains do – about the financial windfall and not about whether or not what they are doing is right. After all, nowhere in his little spiel did Hobb mention making the synths happy about being subservient. In fact, he made sure to mention that Fred would not be happy, but he would still follow orders. Imagine then, a synth pleasure house full of synths like Niska, who can think and feel but cannot exercise their freewill. Now imagine that they were human. It makes me violently ill to think of. Is that better or worse than what he intends to do to Leo? You decide.

The root of the episode (indeed, the entire show) seems to be the question of what makes people human. When Leo asks if Hobb intends to kill the synths, Hobb says that “you can’t kill something that’s never been alive,” but that’s not entirely true, is it? What constitutes life? Plants are alive, though they arguably do not think or feel. Are these synths, who are conscious in the same way as humans are, who feel pain and joy and sorrow, any less alive than a human being? They cannot age naturally, they cannot grow old, but it is still possible for them to die. Humanity, Leo argues to Karen later, is a quality, not a state of being. There are some people out there who do not possess an ounce of humanity, but for some reason that doesn’t make them any less human. So is it fair to judge a synth as less than human, if he or she possesses more humanity? 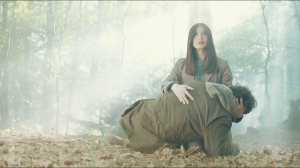 synths, as evidenced by the fact that they were able to fully repair Max. But first we have a rather tense moment wherein Karen, who came at Leo’s behest, tries to force their brains to shut down. How she does this is anyone’s guess, but she eventually stops and helps them save Max seemingly for the simple reason that Mia gave her the choice. This is another one of those sudden switches that I mentioned. Karen, who until apparently just now was all for having the synths “killed” so that their “mistake” would not be replicated, abruptly changes her mind. Was it seeing Leo’s memories that did it, or his repeated assertions that all he cared about was saving his family?

She doesn’t stay with the synths – perhaps because she still doesn’t feel welcome among them after living so long on her own – but in yet another sudden switch, she is discovered by Pete, who seems to have gotten over whatever hangups he had about her being a synth. What is behind Pete’s sudden shift in attitude? Could it be simply spending that brief amount of time with the Hawkins family and seeing the lengths they were willing to go to in order to save the special synths was enough to make him realize that they are essentially people who deserve the same rights and respect that true humans do? Why did he suddenly abandon his intense desire to see Hobb and get some real answers when he saw Karen walking? And in a related matter, why in the hell did Hobb let Karen just walk out of their facility without sending anyone after her?

The reunion between our synthetics was bittersweet, again, as Max has been saved but they had to abandon Fred, who has been reprogrammed by Hobb. Strangely enough, they left him powered down in the basement of a church instead of, oh I don’t know, literally anything else. They couldn’t turn him on, I suppose, because then he would be discovered by Hobb, and I guess for the same reason they couldn’t leave him in the care of the Hawkins family – because now the family is on Hobb’s radar, and he will probably be paying them a visit or two during the next season. 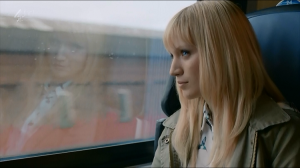 In what is a clear set up for next season, Niska has made off with the secret program that will give synths consciousness. I must admit, I am a little sad that she did so. Niska was always the one who was very anti-human – for good reason, I will admit – but I had hoped that her time with George had changed her mind a little about the way humans can be. She seemed to have gone over to the light side, leaving the code with Laura before taking off on her own, but as Laura soon realized – and we of course learned as well – Niska took a copy for herself. Or she left Laura with a dummy and took the only copy for herself. And was it just me, or was there a moment when she was saying goodbye to Leo where it seemed like they were “sharing” the way normal synths do? Does Leo know she took the code?

All in all, I rather enjoyed this season of Humans and am looking forward to the mysteries and ethical questions that will be raised when we return in season two. What will Niska do with the code? Will the Hawkins family ever see Mia and the others again? Is there something going on between Leo and Mattie? Will the “We Are People” movement play a bigger role next season? What exactly happened to David Elster?