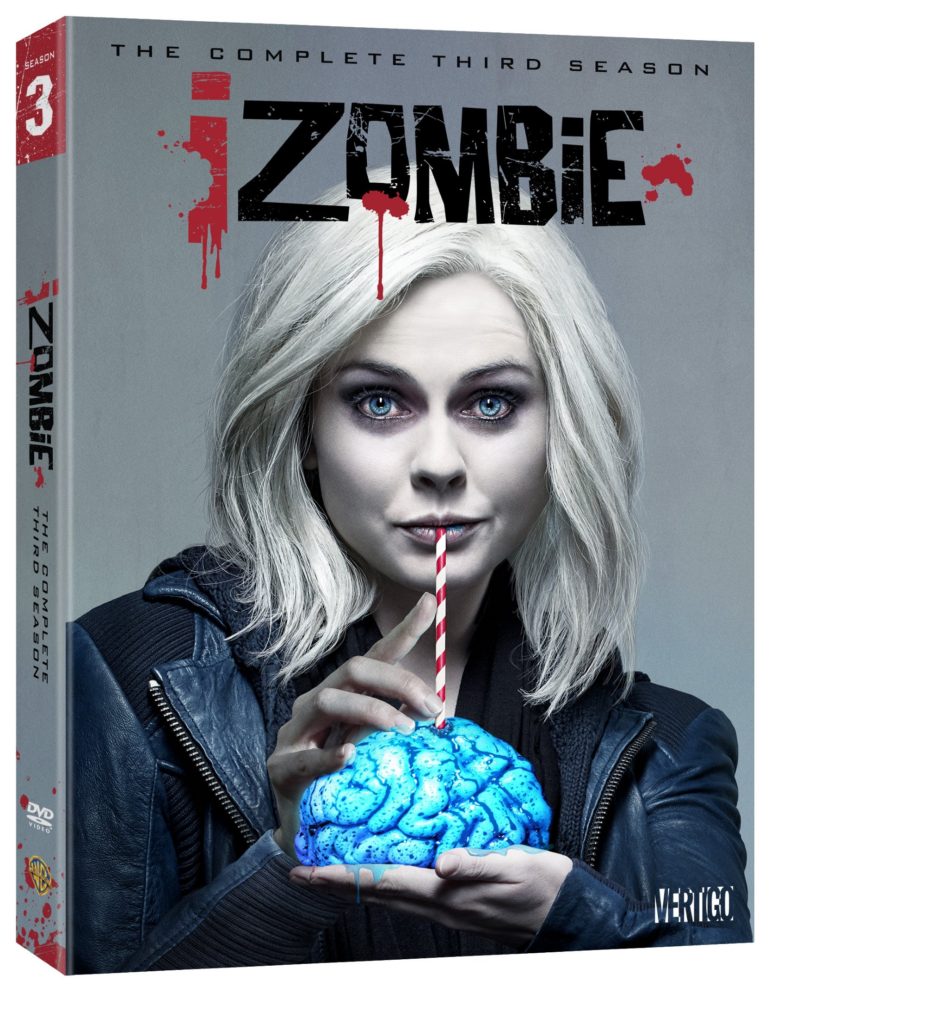 The upcoming iZombie: The Complete Third Season DVD release will feature a lot of extras. The iZombie season three DVD will include all 13 episodes, the 2016 Comic-Con panel, and deleted scenes. Furthermore, to accommodate fan requests, iZombie: The Complete Third Season will also available to watch on Blu-ray courtesy of Warner Archive Collection.

The Blu-ray release includes all bonus features found on the DVD. It too will be available on October 3, 2017. You can find Warner Archive Blu-ray releases through online retailers.

Will Seattle become the capital of a zombie homeland? In season three, Liv has discovered there are more zombies living in Seattle than she previously believed, including a private military contractor employing a zombie army that is preparing for the day humans learn of their existence. Major finds acceptance in this army, and Liv and Clive investigate the murder of a zombie family that may set off an all-out zombie-human war. Ravi’s former boss at the Center for Disease Control shows up in Seattle to investigate the Max Rager massacre. Blaine finds living as a human with no memory of his evil past is more blessing than curse. Peyton pulls at a thread in one of her cases that may lead to the villain that’s pulling all the strings. This action-packed season will follow Liv, as she takes on the traits of a dominatrix, a JACKASS-style stunt man, an office gossip, a pre-school teacher, a conspiracy theorist, a dungeon master, and more.

“After three strong seasons, iZOMBIE continues to have ravenous fans who are always hungry for more,” said Rosemary Markson, WBHE Senior Vice President, Television Marketing. “We think the loyal fan base will be very pleased with the special features and the 13 visionary episodes from season three.”

iZOMBIE is based upon characters created by Chris Roberson and Michael Allred for Vertigo from DC Entertainment. The series was developed for television by Thomas and Ruggiero-Wright, who executive produce along with Danielle Stokdyk (Veronica Mars, Party Down) and Dan Etheridge (Veronica Mars, Party Down). iZOMBIE is produced by Bonanza Productions Inc. in association with Spondoolie Productions and Warner Bros. Television.

It stars Rose McIver (Once Upon A Time, Masters of Sex), Malcolm Goodwin (Breakout Kings), Rahul Kohli (Eastenders), Robert Buckley (One Tree Hill), David Anders (Once Upon A Time, The Vampire Diaries), and Aly Michalka (Hellcats, Easy A).

You can check out our iZombie episode reviews and coverage, here.

The CW has renewed the show for a fourth season.

Are you excited for iZombie season three coming to DVD and Blu-ray? Let us know.

Previous:Tillie Walden on Her Process, Coming Out, and Yuri on Ice