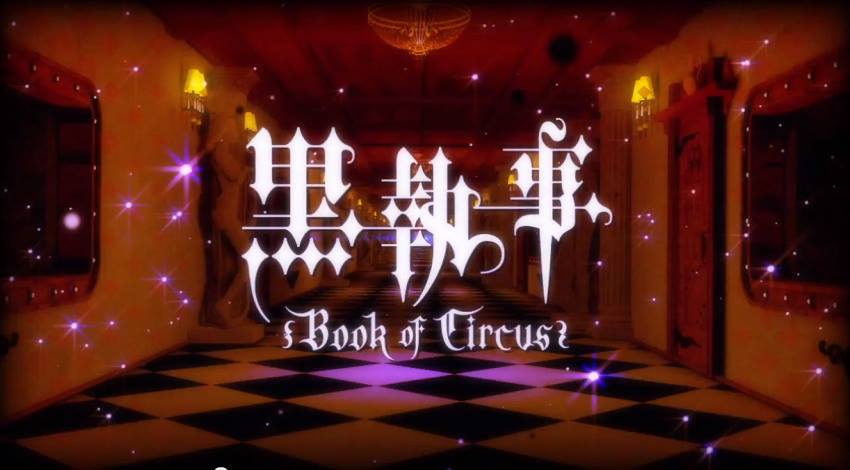 Just when you thought that the fandom for Kuroshitsuji – or Black Butler, in English – was dying down, it’s back. The show has returned for a third season and the fangirls couldn’t be happier. As a long-time follower of the manga, which I hold in a much higher regard than the anime, I was initially confused by the announcement that there would be a third season. Black Butler has a rather confusing adaptation history as season one stopped following the manga halfway through and included a conclusion that meant the show couldn’t possibly be continued without a lot of convoluted writing and enough plot holes to fill a truck. Then season two did just that. 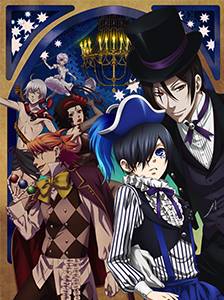 Black Butler had become a cash cow and the studio had written themselves into a brick wall. Despite this they managed to put out a second season, introducing a whole new cast of characters to the world and creating new rules to undo the previous ending. The fandom is split in its opinions of season two, and then it also ended in a way that couldn’t be undone without the writers once again undermining everything about the previous ending. Additionally, seven OVA’s have been released since then, creating brand new side stories so that the franchise could continue. At this point, despite the fact that the anime is a completely different entity from the manga, its popularity hasn’t fallen at all. Two live stage musicals have been adapted from it, and this past year saw the release of a live action Kuroshitsuji film in Japan.

With all the hype surrounding Black Butler, fans often speculated that the series was popular enough to warrant a reboot which followed the manga, much the way Full Metal Alchemist did with release of Full Metal Alchemist Brotherhood. When they announced Black Butler season three, we were left wondering if we were finally getting our wish or if they were going to try to write themselves out of yet another brick wall. Thankfully it seems as if instead, we’re getting something better.

Words can’t describe my fangirl squeal when I discovered this. Noah’s Arc Circus was the manga-based arc that should have come next in the anime when they stopped following canon and took the story in a completely different direction. It is also widely considered the best arc in the entire manga, something I agree with. Needless to say, my expectations are high, though I still can’t figure out how this falls into the anime’s timeline as it’s neither a reboot nor a continuation.

You see, Black Butler is the story of Ciel, Earl of Phantomhive, an aristocratic young boy in Victorian England who sells his soul to a demon in order to seek revenge for the murder of his parents. I often describe the series as Faust meets Batman, as the Phantomhive family had also traditionally held the position of The Queens Guard Dog, making him responsible for keeping Britain’s underworld in line. With the help of his demon, Sebastian, who takes the form of his butler, they solve various supernatural crimes while slowly unraveling the mystery behind his parents’ murders. 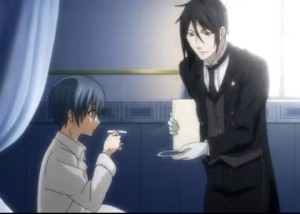 Season three starts much the way season one did, with Sebastian being the perfect butler and preparing the household for its day. After a brief flashback to when the contract was initially made, we see Sebastian help Ciel dress and plan for the day. He then meets with each of the household staff in turn, reminding us just how incompetent they are. Most of the first episode is what I would call fangirl bait – it’s just Sebastian being pretty and perfect, with the staff providing cringe-worthy slapstick comedy. It ends with a stereotypical one-off villain who is in the guise of a guest planning to assassinate Ciel. Sebastian easily takes out the man’s henchmen with cutlery and household supplies before the eventual confrontation between the three, and the man is presumably killed off screen.

It’s very much an introduction episode and almost a complete copy of the first episode of season one; that’s also the worst part about it. When I first watched Black Butler, I stopped after episode one and didn’t start again until I got sick of not knowing what the big deal about this show was. I hated the first episode, and I hate this episode, because in my opinion it makes the series come across as silly. The flying cutlery, the incompetent servants…when I hear ‘contracts with demons’, I’m expecting something a bit more serious, something a bit more dark. Presumably those watching this first episode are also familiar with the series, but if this is your first dip into the Black Butler franchise, I could see this as being very off-putting.

That is until the last five minutes when the main villain is disposed of and we are given a small scene post credits. Like the flick of a light switch, the tone flips and an excited smile crept across my face. Yes, Ciel and Sebastian were back. It’s like the show was teasing me the entire time, and then, just as I was about to close up and start grumbling about what a waste of time it was, it reminded me that yes, this is a story about a demon, and I couldn’t be more excited.

One last note: the first episode didn’t yet show the closing theme, but it does end with what will be the opening theme and animation – and let me tell you, it’s wonderful. The song “Enamel” by SID provides a deliciously foreboding atmosphere and quickly gets you pumped for what’s to come. Kuroshitsuji: Book of Circus is licensed in North America by Funimation and is available for streaming at http://www.funimation.com/shows/black-butler/videos, however to watch it simulcast, you’ll first have to sign up for a subscription.