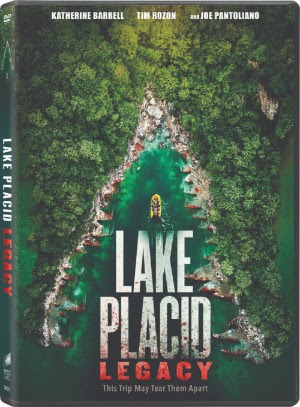 Sony Pictures Home Entertainment will be releasing Lake Placid: Legacy on DVD and Digital on September 4, 2018. Who doesn’t like a gore-filled monstrous animal movie to enjoy on your own or with friends and family, right? I sure do!

Since the debut of Lake Placid back in 1999, the giant-crocodile movie has grown into a successful television film series. Lake Placid: Legacy is the six installment in the franchise and focuses on a team of young explorers who end up discovering a horrific legacy as they set out to reveal the secrets of an abandoned scientific facility.

Releasing on September 4, 2018, on Digital and DVD, the film was directed by Darrell Roodt (Dracula 3000). Along with Joe Pantoliano (The Matrix) and Sai Bennet (Close to the Enemy), Lake Placid: Legacy also stars Tim Rozon and Katherine Barrell from Wynonna Earp.

Fans of the popular Wynonna Earp TV series might enjoy seeing both Barrell and Rozon fight for their lives against a giant man-eating crocodile.

When a group of young explorers venture to a mysterious lake, they discover an island harboring an abandoned lab facility with a horrific legacy: the island is home to a deadly predator. Before they can turn back the crew gets dragged into a battle for their lives – former enemies will quickly need to put their egos aside and work together if there is any hope for survival.

Written by Jonathan Lloyd Walker from a story by Walker, Jeremy Smith and Matt Venables, Lake Placid: Legacy was produced by Lance Samuels and co-produced by Adam Friedlander and Daniel Iron.

It has a run time of approximately 90 minutes and has been rated R for creature violence and related gore.

Are you a fan of the Lake Placid films series? Let us know.

Previous:‘Pokémon the Movie: The Power of Us’ Gets Limited Theatrical Release By Fathom Events
Next: ‘Constantine: City of Demons’ Gets October Ultra HD, Blu-ray, and Digital Release