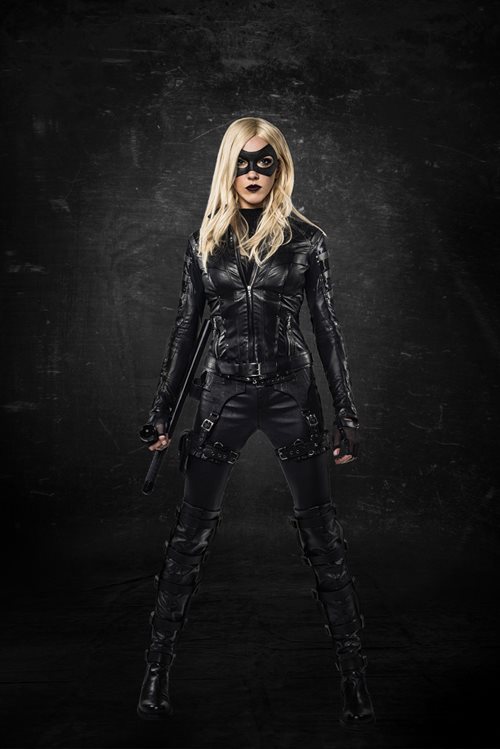 Now in its third season on The CW, Arrow has proven itself adept not only at depicting the journey of its central hero, Oliver Queen, but the arcs of its memorable, varied ensemble as well. Being skilled in hand-to-hand combat, technical skills, or the ability to use weaponry is important, however caring for others, resourcefulness, and the ability to get up and keep on fighting despite pain and loss matters as well. Not just from Oliver himself—Felicity Smoak, John Diggle, Roy Harper, Sin, Moira Queen, Thea Queen, Detective Quentin Lance, Sara Lance, and Laurel Lance have all brought different skills, viewpoints, strengths and weaknesses, and been heroic in different ways.

It’s time to talk about what’s great about Laurel Lance. Warning: this article contains spoilers through the mid-season finale “The Climb” and references to spoilers for what’s coming up in Laurel’s story.

Some character arcs on Arrow have played more strongly than others. Some characters have transitioned more smoothly or quickly into the heroic sphere. Felicity and Diggle click early on with Oliver and his mission while with others, such as Roy’s journey from someone who would steal a purse to the vigilante Arsenal, go through a longer struggle before finding their place. Likewise, we know Sara’s painful history that parallels Oliver’s journey on the island. Laurel’s story has been an unusually rough road so far, both purposefully as a part of the character, and due to some bumps in the writing. Katie Cassidy has brought charisma, grace, and a mixture of strength and emotional vulnerability to the role, a performance that at times has added needed focus and ballast to Laurel’s arc.

There have been mis-steps in Laurel’s story, on top of the fact that viewers were thrown at the outset because (Dinah) Laurel Lance’s iconic status in the comics as Black Canary didn’t materialize on Arrow. Fans new to the world the show is built from would have no such expectations, and some were disappointed with Laurel as a TV character. There have been glimpses of her heroic qualities, yet too many setbacks can pile up and affect the growth of a character. At times it also seemed as if it the show hasn’t been sure what to do with her. Sara Lance, the Black Canary created specifically for the tv series, has proven an appealing, badass female superhero. Sadly, she is killed off in the season three premiere. While the need to propel the character arcs, especially Laurel’s story, is understandable, that particular decision adds to the difficulties with Laurel. 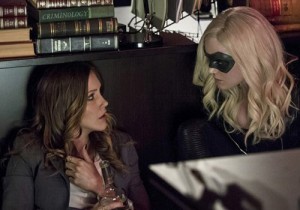 It might’ve worked better to somehow continue the story of both sisters, rather than create an either/or scenario surrounding an already troubled character. The relationship between the Lance sisters, and how it highlights both characters, has been among the strongest aspects of the show.

While Laurel from the start is clearly self-possessed, independent, and good at her job as a legal aid attorney, her role at first remained too often limited to Oliver Queen’s former love interest. Adding to that, her romance with Tommy Merlyn, Oliver’s best friend, brought in a love triangle that wallowed in romantic angst without really furthering the arcs very much. Laurel’s journey sometimes mired or stalled on a show that otherwise has an unusually strong sense of momentum and pacing.

As to what’s been right about Laurel, firstly, it’s a powerful and valid story to show a character with as poised and brave a front as Laurel’s unravel from pain, vulnerability, and self-doubt. Interesting in a show abundant with unhappy characters going through arcs about identity and crisis of purpose, Laurel has taken criticism of being “whiny” or “self-centered.” Despite the problems in the writing, Laurel does emerge as a sympathetic character. Her struggle with depression, addiction, and grief has been compelling, and we’ve repeatedly seen her caring for others, her connection to her family and friends, her ability to grow and change, and her courage.

While Laurel hasn’t played the role of kickass fighter yet, she’s had self-defense training, and we see this in action. Laurel—a cop’s daughter—grabs a shotgun to face an intruder while Tommy conceals a terrified, targeted child. In another incident, Laurel uses her self-defense fighting skills. She also takes on a gunman attempting to take Laurel and others hostage at a gala event. While Laurel sometimes needs help in her forays into physical heroism, her toughness and resourcefulness often show during a crisis. She’s outspoken and doesn’t accept attempts at intimidation, of herself or of others. Laurel Lance gets scared and she has guts.

We aren’t just told that Laurel is a smart lawyer, we see her doing research and putting clues together. She solves the mystery of Sebastian Blood long before anyone else—noting that no one believes her at first. Laurel gets put in jeopardy at times, but she also helps save others. At times Laurel’s fearlessness is a part of her issues—she can be heedless. Her season two arc, however, from the get-go addresses this after her actions in the season one finale contributed to a chain of events that landed in Tommy’s death. Laurel copes not only with grief but guilt. Things ramp up further when Laurel, now an assistant district attorney, takes point in trying to catch the vigilante, after her initial fascination. Her perspective on the vigilante continues to evolve and change.

Arrow hit some poignant notes with Laurel discovering Oliver’s secret and in how she and her father Quentin Lance decide to carry the knowledge. The friendship between Oliver and Laurel eventually gets to take a front seat, reminding us that, regardless of the ups and downs of their romantic life, they care about and respect each other. Eventually Oliver brings Laurel into Team Arrow’s headquarters. Yet still, she’s placed on the sidelines, as Oliver tells her she can’t help with the mission to stop Slade. Laurel decides to go in anyway, winding up saving Oliver’s life, then has to shoot an arrow at just the right spot to get them free, despite being terrified and shaken after an explosion traps them.

In season three, the sidelining becomes a pointed and recurring theme, with Oliver and Quentin at various points telling Laurel she can’t do things. It’s out of protectiveness, however, that doesn’t mean it’s always the right thing, just as Laurel’s courage can sometimes be heedless. Laurel, reeling and angry after Sara’s death, needs a way to deal with those feelings and so she turns to Ted Grant (Wildcat in the comics), a boxer with a vigilante past of his own, for training. The rapport between the two has so far been intriguing to watch, as Laurel finds a way to channel her pent-up need to take action. She somewhat rashly decides to go after a wife abuser, and the encounter doesn’t go well, but she endures and continues to seek an outlet for her feelings and follow her impulse to stand up for what’s right, something we saw from the start in her job as a legal aid.

The show dropped a bombshell when it released official images of Laurel in her own version of the Black Canary costume. In November, Arrow Executive Producer Marc Guggenheim discussed what’s to come with Entertainment Weekly, saying “a mask does not a hero make. We’re really at the beginning of Laurel’s journey to becoming the Black Canary, not the end by virtue of the fact that she’s put on a costume…She gets punched, she gets hit, she gets injured. When she throws a punch, she doesn’t always connect. When she jumps off of something, she doesn’t always land on two feet. She’s a much more rougher and realistic kind of crime fighter.”

Laurel’s steps into heroism may continue to travel over rough ground, yet that’s nothing surprising. Look at where Ollie started, what he became, how he’s had to re-make himself. He didn’t return home a fully-fledged hero, although he is already skilled warrior, and he wound up questioning his own methods. As far as he’s come, even Oliver still has more to learn. Likewise, Sara goes through her crucible, another imperfect hero. Roy Harper is granted a mask and a place on Team Arrow by the end of season two, a rather rapid trajectory, despite the difficulties of his own journey, his impatience, impulsiveness, and misfortunes. Laurel’s inching closer to Black Canary is hardly rushed—it’s mid-season three and we’re just now seeing the beginning of that transformation after the groundwork of the first two seasons. Her imperfections, vulnerabilities, and setbacks are part of the building blocks of a hero. Arrow has emphasized how much the person underneath the mask matters—Laurel’s story is another intricate, hard-won process.

The definition of what makes a character heroic isn’t just the times they save the day and triumph, it’s how they face their inner demons, what they do when tested, and how they get back up and keep going after they fall down. Laurel has already shown many times over that she possesses the raw materials that define heroism.

Are you excited to see Laurel take on the Black Canary persona? Further thoughts on Laurel’s arc so far? Sing out in the comments. 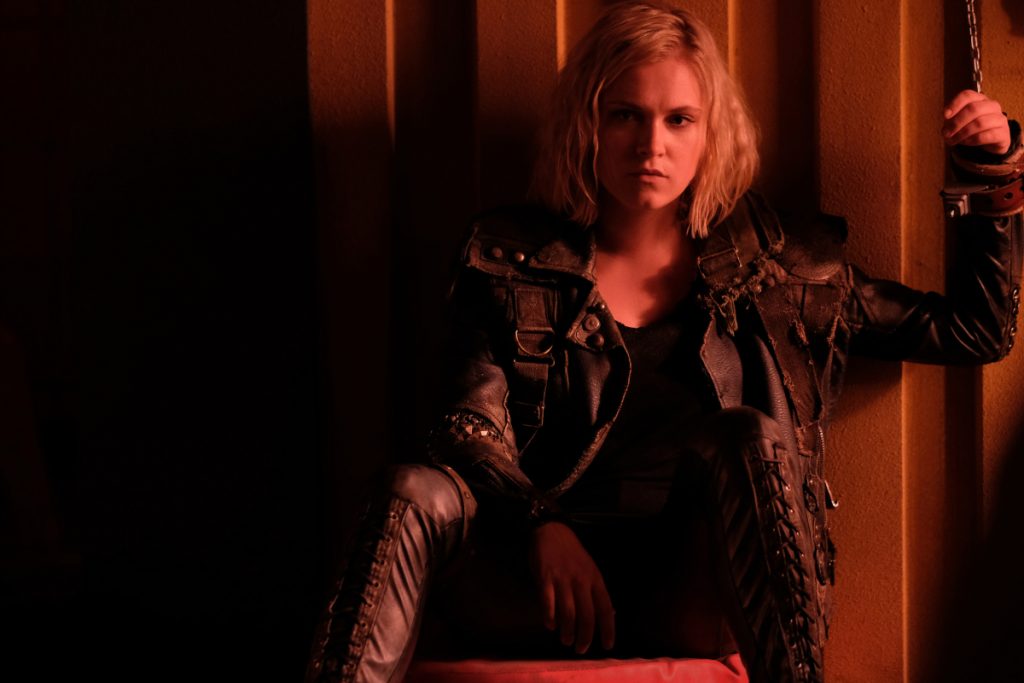 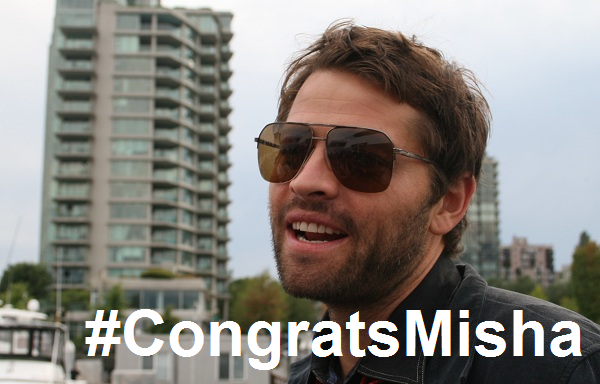 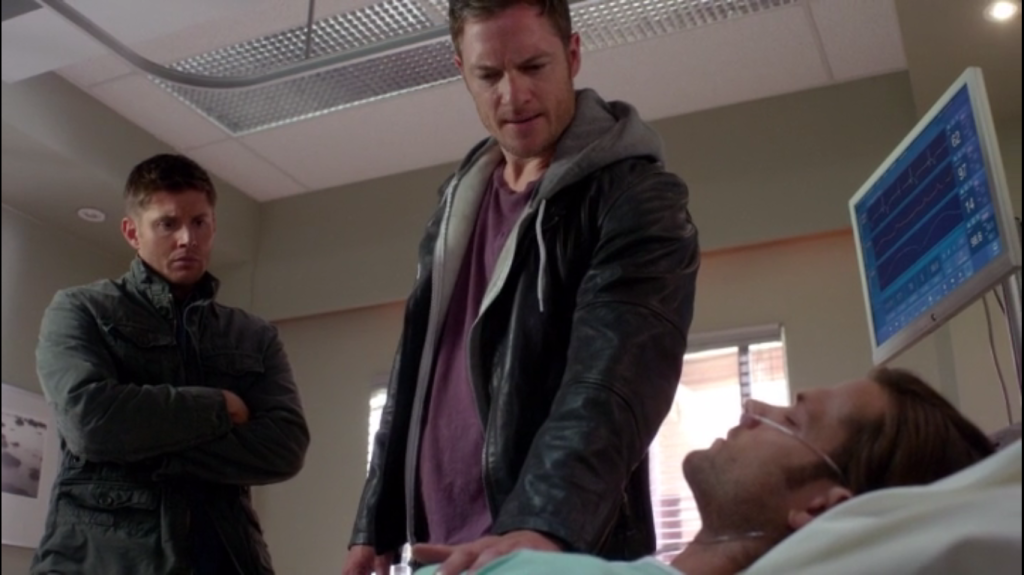