Teen Titans: Beast Boy is a new coming-of-age origin story for 17-year-old Garfield Logan. It takes place in the same universe as Teen Titans: Raven by the same writer and artist team. If you enjoyed that novel, you’ll definitely enjoy this next installment that introduces Gar and how he becomes Beast Boy.

I was provided with an eARC of Teen Titans: Beast Boy from DC Entertainment. All opinions are my own.

I’ll be the first to admit that I don’t know as much about the Teen Titans as I should. Of course, I’m familiar with the cartoons, DC Universe show, and I have also read the short-lived Titans: Titans Together digital first series. (DC, please bring that series back!) So, when it comes to the young adult Teen Titan graphic novels, I am approaching them much like a new fan would. And from that perspective, I can safely say that Teen Titans: Beast Boy would definitely inspire me to read more. 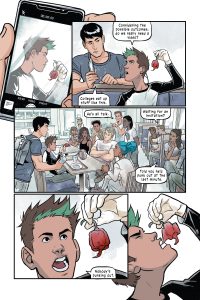 Teen Titans: Beast Boy begins with Gar Logan contemplating his average life and the “buttered popcorn” bucket list he has for his senior year. His main concerns are to try to gain muscle mass, get his hair to cooperate, find a pizza-paying job, start hanging out with the cool kids, and kiss and possibly someday date the popular girl in class. It’s almost the end of the school year and so far, he hasn’t accomplished any of those things.

Gar spends most of his time with his friends Stella and Daniel (better known as Tank). They’re all fairly competitive, whether it be video games, hot dog eating contests, or playing darts. The popular kids make fun of Gar, but his response is to take “…control of the conversation. [Flip] the script.” He would rather make fun of himself before others can and then they would eventually stop. That doesn’t mean he enjoys always being picked last in gym though.

At one point, Gar decides to stop taking his supplements that his parents had him take because he felt like maybe they were stopping him from gaining weight. Little does he know, because of that choice, his life is about to change drastically. His life won’t be so boring, normal, or unnoticeable anymore. Suddenly he has the attention of the popular kids, but eventually Gar has to really think about the changes he’s going through and rely on the friends who have always been there for him. 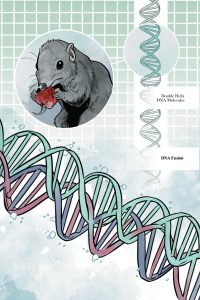 Writer Kami Garcia is a #1 New York Times and USA Today bestselling author. She is best known for Beautiful Creatures and Dangerous Creatures novels. She has also written a number of graphic novels and series for DC Comics. My familiarity with her writing is primarily Teen Titans: Raven, which I had enjoyed, but I think the writing is more engaging in the Beast Boy novel. She makes Gar a very relatable character. He hasn’t accomplished nearly the things he’s wanted to. He deals with bullying and trying to be accepted for who he is. Garcia presents a character that I think many teenagers can relate to.

Artist Gabriel Picolo is a Brazilian comics artist who does work for a number of publishers. His art in Teen Titans: Beast Boy uses a lot of strong solid lines and has a very clean look. Each character is distinct from one another and their personality and emotions clearly show on their faces. Many of the panels pay careful attention to detail including the backgrounds. It isn’t just stagnant characters in these panels. They appear active on the page.

What I appreciate is that the art is very detailed without being too busy. The use of colors by David Calderon compliments Picolo’s art well and I especially enjoy the watercolors used in the backgrounds. It paints a whimsical picture of Gar’s life which illustrates that no matter what Gar thinks, his life isn’t dull and insignificant. It wasn’t even before he was noticed by the popular crowd.

Teen Titans: Beast Boy is recommended for readers ages 13+. The novel is a diverse read that touches on topics such as coming-of-age, identity and self-discovery, self-esteem, popularity, and discovering who your real friends are. Something that definitely applies to the intended reader age group. There’s a lot of pressure to do what is cool, but that’s not always the best or most rewarding thing to do. 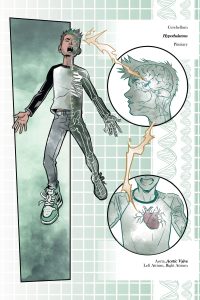 Overall, I really enjoyed Teen Titans: Beast Boy. I found it very hard to put down and ended up reading it in a single night. I will be the first to admit that I have a short attention span, but this book and its characters sucked me in and a kept me actively engaged. I was never that interested in Beast Boy prior to reading this book. Now, I want to know more about him.

What I like so much specifically is how relatable Gar is as a character. I may have graduated high school nearly two decades ago, but I remember what it was like to be different and have kids make fun of me and bully me. I remember trying to connect with the popular kids, not because I wanted to be popular, but because I wanted to form more relationships with my classmates. I’m sure many, if not most teenagers have or have had similar experiences.

Gar tries to get more attention and make himself more noticeable, but in the end, he really comes to realize that he is just fine as he is and he has great friends who love that person he is. That’s all he really needs. He’s accepted and valued by those who actually matter. They have stayed with him through everything before and after the popular crowd noticed him.