Wonder Woman: Tempest Tossed features a Diana Prince who is just turning 16 years old. Little does she know; her life is about to change radically. As with other DC YA graphic novels, the story presents a new origin story for a familiar character that focuses on feminism, diversity, social issues, and other relevant topics for today’s young adult reader.

I was provided with an eARC of Wonder Woman: Tempest Tossed from DC Entertainment. All opinions are my own.

Wonder Woman: Tempest Tossed deals with the typical struggles of growing up along with some of the tougher social issues that many people face. The subject matter deals with racism, the refugee experience, gentrification, human trafficking, and facing adversity. So, parents may want to keep that in mind when it comes to younger readers and be ready to answer any questions that they may have. (The recommended reading age is 15+).

This graphic novel was not the easiest to read because the subject matter is very real and reflects the awful experiences that many real people face. But I think the story is powerful and one that is necessary to tell in today’s landscape especially. Teens who read this book will be able to learn and reflect, and maybe also determine ways that they can help those who are facing adversity as well. 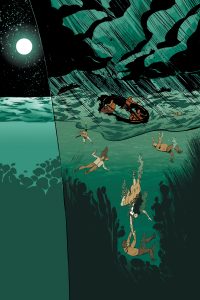 Wonder Woman: Tempest Tossed begins in Themyscira, the secret island of the Amazons, on Diana’s 16th birthday. (Or, as she refers to it, her “Born Day.”) The reader is given the history of Themyscira along with the history of the Amazonian people. It also goes into how Diana came to be. (She was created by goddesses and given to her mother, Queen Hippolyta).

Diana thinks a lot about how she is so different from the other women on the island. She was going through puberty (only she doesn’t recognize it as such) which was something the others in Themyscira had never heard of or seen before. Because of this they called her the Changeling. Diana hopes now that she is 16, she will be just like everyone else, but that is not the case.

That evening a man washes up on the shores of their island, breaking the Themyscira barrier. He tells the women that there are children out on the water who can’t swim. There is nothing that they can do. This angers Diana, so she breaks the rules to save the children. “When the rules are wrong – you have to break them. Especially when little ones are in trouble.” Unfortunately, after saving the children, she could no longer see her island. Her life was about to change dramatically.

Diana ends up on a Greek island where she and the other children are taken to a refugee camp. The living conditions are terrible and she can’t understand why children would ever be treated that way. While at the camp she meets a married couple, Steve and Trevor Chang. (Shout out to Steve Trevor!)

Since Diana is able to speak so many languages, Steve and Trevor ask her if she would like to go to the United States where she may be in a better position to help. She stays with a friend of theirs and her daughter, who brings sandwiches to those who are hungry. Diana assists her and sees the terrible things the local children and their families go through. But Diana is brave and strong. She is determined to fight for what’s right. 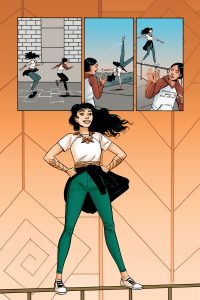 The author, Laurie Halse Anderson, is someone who is known for writing about tough subjects and has won a number of awards for doing so. It’s obvious through her writing in Wonder Woman: Tempest Tossed that she is adept at writing about important topics in a way that is sensitive, but does not hold back. Her words paint a picture of the horrific things refugees experience, and she does not shy away from topics like gentrification, kidnapping, and sex trafficking as she intertwines these topics with a coming of age story. The graphic novel is inclusive and diverse with representation of different races, ethnicities, nationalities, and sexualities.

The art by Leila Del Duca is maybe not my favorite comic book art, but the panels are incredibly well done. The art fits the story it is reflecting and that is what is most important. This isn’t a beautiful story and the art does not need to be beautiful. Her style illustrates how gritty the story is and is appropriate for the subject matter.

I found Wonder Woman: Tempest Tossed to be a very inspirational read. Diana didn’t just observe what was going on around her. She got involved. She saw the injustice that refugees and immigrants face and fought back against it. She devoted all of her time to helping and providing for others in any way that she could, including feeding the hungry and physically fighting human traffickers. Diana saw some of the worst that humanity had to offer and she showed love, compassion, and kindness to those who were affected by it. 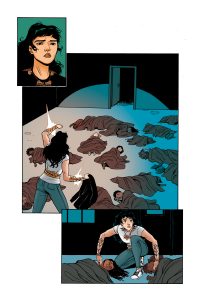 I believe that Wonder Woman: Tempest Tossed is a very important and timely story for young adult readers today. It is relevant and relatable to current struggles and events and is written in a way that is very easy to understand. Stories like these can help to instill further empathy and expose the reader to social issues that they may not be as familiar with. From there, they may become inspired to research such topics on their own.

I highly recommend Wonder Woman: Tempest Tossed to both young adult and adult readers. It is informational, educational, and covers very important topics in today’s world. It may not be the easiest of stories to read at times, but that is why it should be read. Books like this that are written in such a powerful, impactful, and sensitive way when covering such significant topics are always important. 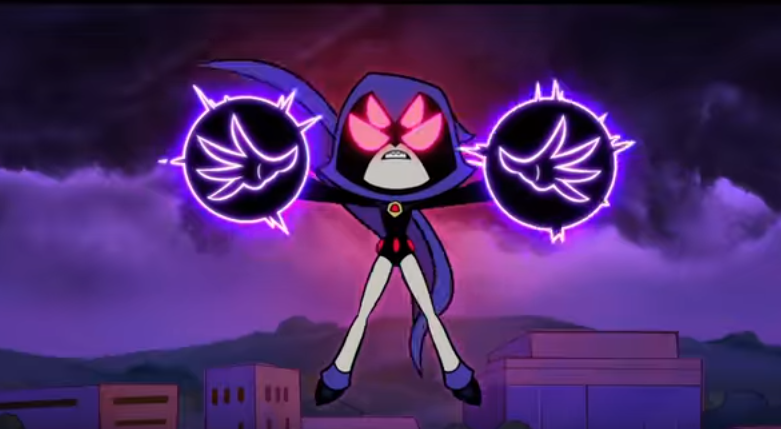