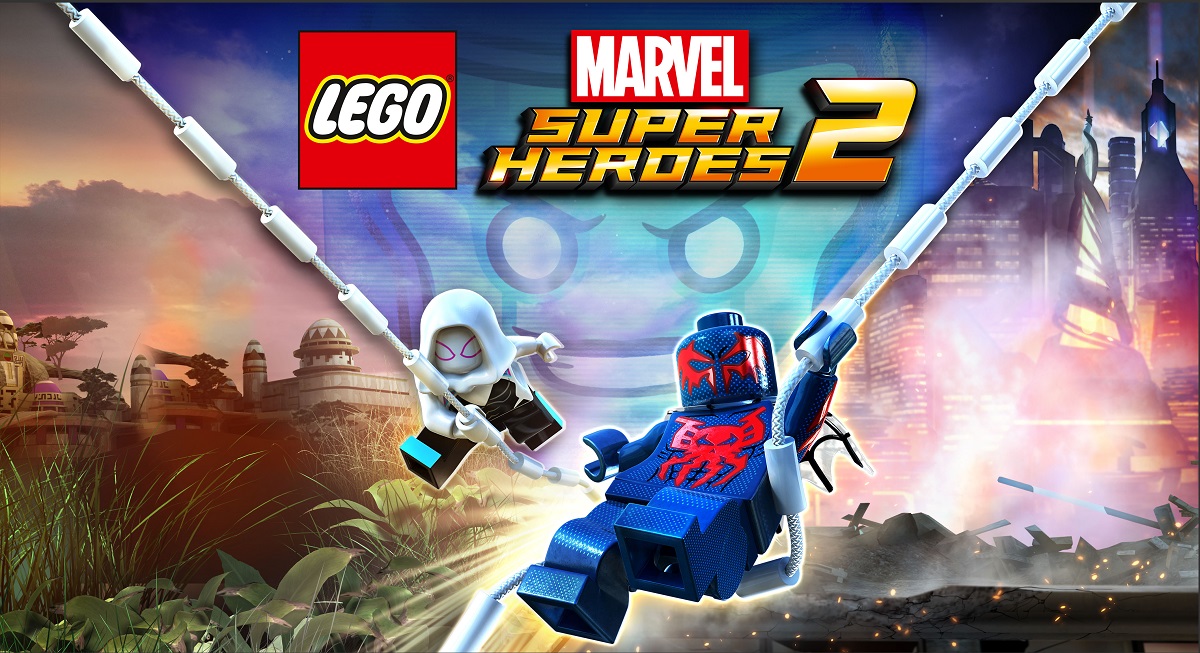 I’m a big fan of the LEGO video games. I have LEGO Harry Potter, Star Wars, and Lord of the Rings, and now I have added LEGO Marvel Superheroes 2 to my collection! After the press room and panel at NYCC, I was really excited to play this game. A game with the humor that the LEGO games are known for, plus some pretty amazing graphics, LEGO Marvel Superheroes 2 is an enjoyable experience with loads of time-wasting activities.

Note: I received a copy of LEGO Marvel Superheroes 2 in exchange for an honest review. My opinions are my own.

First off, I need to point out that while I have finished the main story of LEGO Marvel Superheroes 2, I’m nowhere near finishing the game completely. I still haven’t beaten any of the Gwenpool missions, and a lot of character cards and vehicles remain locked. My game is less than 30% complete, but as this was released on November 14, I’m already behind on getting my review out. Besides, I feel like I’ve seen enough of the game that I can honestly give my thoughts. 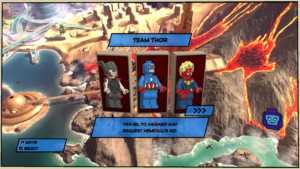 The overall story is pretty interesting. Kang the Conqueror has appeared and upended time and space, and the assembled Marvel heroes must take him down. The animation is quality – hell, the opening credits is probably my favorite thing ever – and the music selection is choice. Each level of the game story allows you to play as different characters – one level you’re the Inhumans, one level you’re the Guardians – and at times you can choose which mission you’d like to do first. I went in the “recommended” order (which is just taking the first mission that they show, rather than scrolling through them), but I don’t think it makes any difference. All these levels culminate in a gigantic showdown with Kang which sadly felt a little anti-climactic after hours of gameplay. I am excited about free play, though, and going back to explore things that I passed by in the essence of finishing the story. 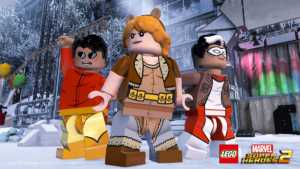 There are dozens upon dozens of playable characters in LEGO Marvel Superheroes 2 (over 200, in fact, with another 60+ available via DLCs), and each one has their own special move and little quirks. For example, Spider-Gwen’s special move involves using a drum kit to break glass, and if left alone for long enough, Spider-Man uses his web-slinging to take pictures of himself. Star-Lord’s special move has him putting on his headphones and dancing, while Black Panther chases mice if you leave him unattended. Some of you (like Farid) will be disappointed that the X-Men are not in the game, though you can build them in the re-vamped character customizer if you wish.

I’m not much of a gamer. I still only have a Wii, and this is the first real game I’ve played on my laptop, so it took me a while to get used to maneuvering with the keyboard controls. The default controls were too awkward for me, so I changed them, and in doing so I feel like I confused the game. There is an icon that appears to offer hints, but every time it popped up for me, it said “no input”, so I blindly stumbled through the game without the hints. Also, sometimes it would tell me which key to push to perform an action, and it was the wrong key. Like, there is a level where Captain America needs to call a Quinjet. The game told me to use F2, but all that did was enter two-player mode. It turns out, the Chronopolis loading screen told me to hold down T (which I had designated as the key to switch characters), which turned out to be correct.

For the most part, though, the difficulties in gameplay were my own, for simply being inexperienced. Some users reported crashes, but I didn’t have that problem. I had very little lag, even moving from one location to another. Loading sometimes took a while, but that’s to be expected, and as mentioned previously, the loading screen offers helpful hints. My only true issue so far (as opposed to me not knowing which key to push, or that I have to hold one key down while pushing another) is a glitch in the Gwenpool mission “Hank-ger Management” which has Ant-Man stuck in a vent. 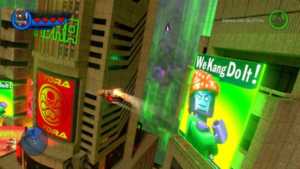 LEGO Marvel Superheroes 2 features 18 different Marvel locations – like Wakanda, Xandar, and Lemuria – joined into one giant city. Journey from Avengers mansion to all 18 locations, be it by foot, flying (for the characters that fly), or by the hover-mono-rail. You can explore Chronopolis between missions, taking side missions as you go, or wait until free play to avoid characters saying things like, “Um, shouldn’t we be going to Asgard right now?”. Shut up, Carol, I’m trying to fight these mummies. Solving petty crimes will win you rewards; completing mini-missions can unlock character cards or other bonuses like Gwenpool missions. Winning a race will unlock a new vehicle. There are a lot of things to find in each location, so change characters frequently to unlock everything.

LEGO Marvel Superheroes 2 is a thoroughly enjoyable time-suck of a game. I literally lost an entire weekend to this game and barely even noticed. I’ve found the LEGO games to be consistently good and fun, and this is no exception. You don’t need to be well-versed in Marvel lore to enjoy or understand this game; in fact, they’ve prepared for that by introducing character cards that feature information about each character, for those of us who are new to Marvel who don’t know who everyone is. If you’re a fan of LEGO games or a fan of Marvel (or, most likely, a fan of both), I can’t imagine that you wouldn’t love this game.

LEGO Marvel Superheroes 2 is rated E (for everyone) and is currently available on PS4, Xbox One, Switch, and PC.