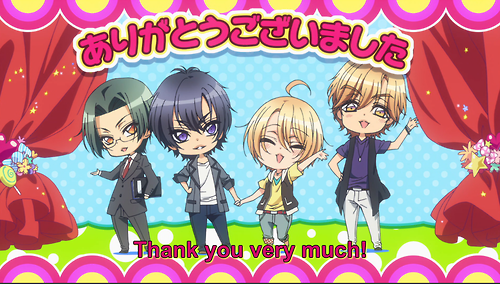 My first instinct when reviewing this episode is to just scream “PRECIOUS BABIES” in caps lock for several paragraphs and leave it at that.  It’d sum up my feelings pretty well, but alas, I do want to dive a little further into the episode.  It pretty much had everything I was hoping to get out of the series and more.  The only down side to the entire thing was that this was the end of the season.  I call upon the Anime Gods to please give us a second season or an adaption of the Back Stage novels or something.   Please, oh mighty Anime Gods, grants us this one wish.  I need more of this universe in anime form as soon as possible. 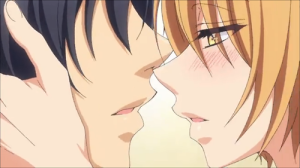 As I mentioned in the last review, the beginning of this episode comes with a trigger warning for assault.  It doesn’t go very far, though, and Izumi fights his attackers off.  The incident sparks a realization in him that the only person he wants to be intimate with is Ryouma.  Everything falls into place for him then and he goes rushing to confess his feelings to him.  When he gets to Ryouma’s apartment, though, he forgets the whole confession part and they end up jumping right into bed together.

When the sex scene began I thought the were going to mix up the censorship a bit.  Instead of turning one of the characters into the sky randomly, they just started to slowly pan around Ryouma’s apartment.  Then, to my surprise, they cut Izumi and Ryouma naked in bed, no awkward sky censorship in sight.  It makes me wonder why they did that strange form of censorship in the first place if they were going to show these intimate scenes in the finale?  Either way, these two love birds finally did the deed.  As Rei had warned, it looks like it was probably painful for poor Izumi, but they were both gay sex virgins, so that’s not exactly a surprise.  I’m sure they’ll get better at it as their relationship evolves.

When it’s over and done with it dawns on Izumi that he never actually confessed his feelings for Ryouma at any point during the whole affair.  Ryouma is still doubting his motivations for sleeping with him, but Izumi is quick to correct the situation.  Upon telling Ryouma that he loves him, Ryouma breaks down into tears.  And okay, I cried too.  I cried worse than Ryouma was crying.  This love story has been dragged out for 10 emotional episodes and it finally got its happy ending.  This is the point where I considered just writing “PRECIOUS BABIES” 500 times and submitting it as a review, because I was just too damn emotional to really form a coherent thought beyond that. 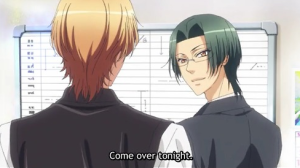 This episode also did something that I’ve been praying to the Anime Gods for for a very long time.  It finally confirms that Rei and Shougo do have a sexual relationship of some sort (which everyone who has read Back Stage is already aware of, but anime watchers may have only picked up through subtext).  It also proves that Rei, bless him and his craftiness, has mastered using this relationship to make Shougo ‘behave’ and get his work done.  Rei is perfect.  Please join me in the official Cult of Rei and appreciate everything that this man can do.  Have I mentioned I’m obsessed with Rei?  I’m sure that’s come up before a couple of times in my reviews maybe.  Anyway, moving on…

This episode had everything I needed.  It had Shougo, which there hasn’t nearly been enough of for a very long time.  It had Rei being crafty and amazing at every turn.  It had Shougo with Rei and turned the subtext into actual text.  It had Izumi and Ryouma finally being on the same page about their relationship.  It had an intimate scene without awkward cloud censorship.  It was perfect.  Now what am I supposed to look forward to every week now that this is over?  My Wednesdays just became infinitely less interesting.  If you know of a good Yaoi/BL coming up in the near future, please share.  I’m going to need something to fill my time now.