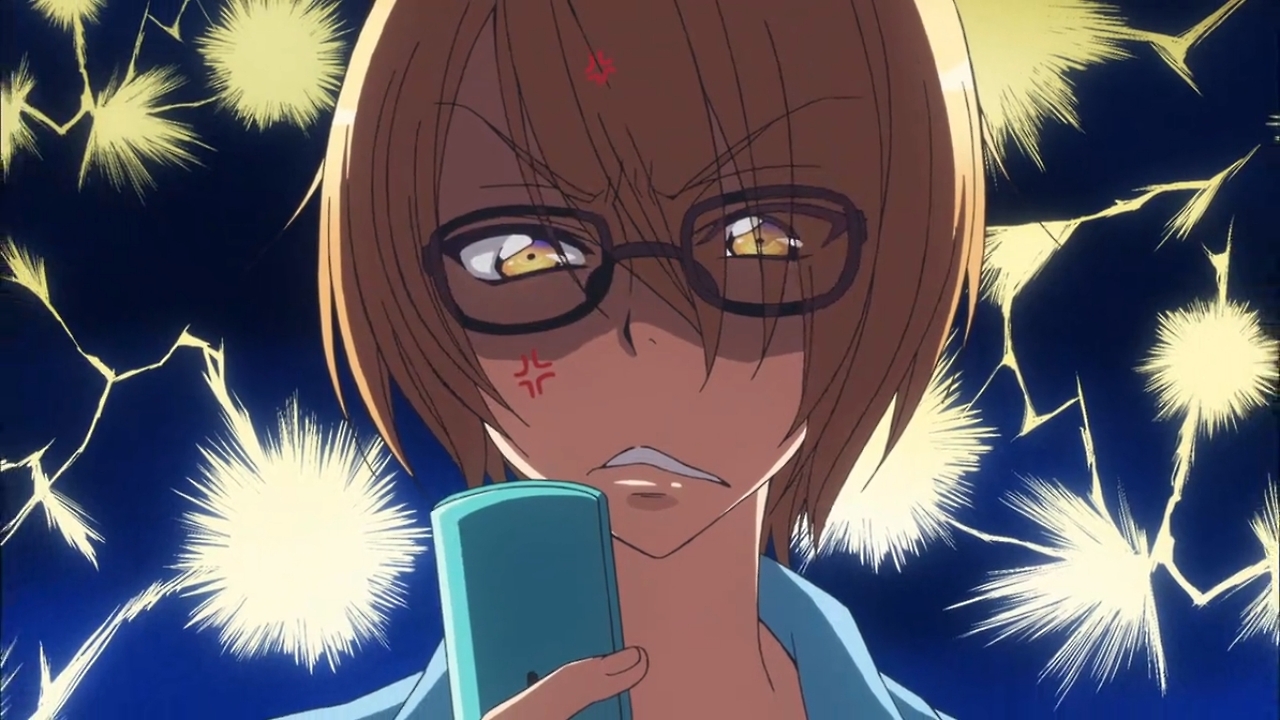 This anime continues to surprise me with both how absolutely adorable it is and how much each character continues to flesh out week after week. The characters could have been simple two-dimensional beings that exhibit only the cliched trademarks of their type (otaku, rock star, etc), but things are a lot more nuanced than that. Also, every time I watch an episode I have the finale song stuck in my head for at least 30 minutes. I don’t even really like that type of music. But damn, it’s catchy.  This show is magically delightful on so many levels. 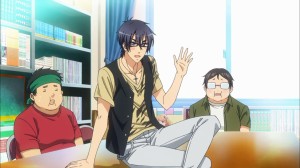 My favorite part of the episode is the complete role reversal between the “cool” pop star and the “nerdy” otaku. The pop star, Ryouma, is completely head over heels in love with the nerd, Izumi, who is just really annoyed at the whole situation. Part of Izumi’s frustration probably comes from the fact that being in any sort of relationship with Ryouma is going to put him even further into the world of celebrity against his will. He’s already surrounded by it at home and wants no part of it. When he rejects Ryouma, the pop star makes even more of a scene, attracts more attention, and essentially forces Izumi to relent. I’m not entirely pleased with the forcefulness of these interactions, but I do find the role reversal at the very least entertaining.

Ryouma is becoming more likable, however, despite his forceful tendencies. While he seems to have been initially put off by the whole “nerd” thing, he has come to see it as Izumi’s artistic side and sacrificed his one day off to help Izumi finish his manuscript. I don’t doubt Ryouma’s love in the slightest, even if he’s young and clinging onto something that he latched onto in his childhood. You don’t stay up an entire night and following day to help someone with a hobby you know nothing about unless your feelings for them are genuine. I’m sure there’s some infatuation on his part that’s inspired by his youth, but he’s clearly putting himself out there in ways that he probably wouldn’t have done otherwise.

Now here’s where I get a bit Negative Nancy on you guys. While it seems like most fans were thinking him kissing Izumi repeatedly while he slept was oh so adorable, I’m pretty bummed at the constant themes of dubious consent that this and pretty much all other yaoi/shonen-ai stories inevitably have to fall back on. Yeah, Ryouma is madly in love with Izumi. Yeah, he felt bad about what he did to him earlier and promised he’d never “hurt” him again. Yeah, kisses are pretty innocent. But Izumi was asleep, had no way to consent, and had previously rejected his advances. So while my review here is generally positive, I’d be completely remiss if I didn’t at least point out how screwed up this trope is. 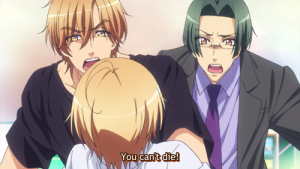 Now that I’ve Negative Nancy’ed this review, I’m going to squee a bit. Who else notices that Shouga and Rei are almost always together? And that they are more present in Izumi’s life than his actual parents? And that they are both extremely protective of him? Because I do, my friend, I do. And I ship those two hard. So hard that I broke down and started reading the manga and yes, my friend, it is canon. If you are enjoying their relationship as much as I am, read the manga. Once again I’m going crazy about a side pairing more than I am the main pairing (Kisa/Yukina from Sekai Ichi Hatsukoi deserve their own spin off, okay?), but I just can’t help it. They are like Izumi’s gay dads. Rei is his Uke mentor and Shouga is the badass Seme that protects his younger brother from other rival Seme popstar. It’s all very weird, very complicated, but very interesting and I’m loving every minute of it.

So another week of Love Stage!! is over and I’m once again enchanted, but frustrated that weeks move so damn slow. My willpower is not strong enough to wait these short breaks out, so I’ll probably soon pass the episodes with my manga reading. I will do my best to keep my anime reviews spoiler-free from what is in the manga, but I just can’t wait anymore. This story is too good.