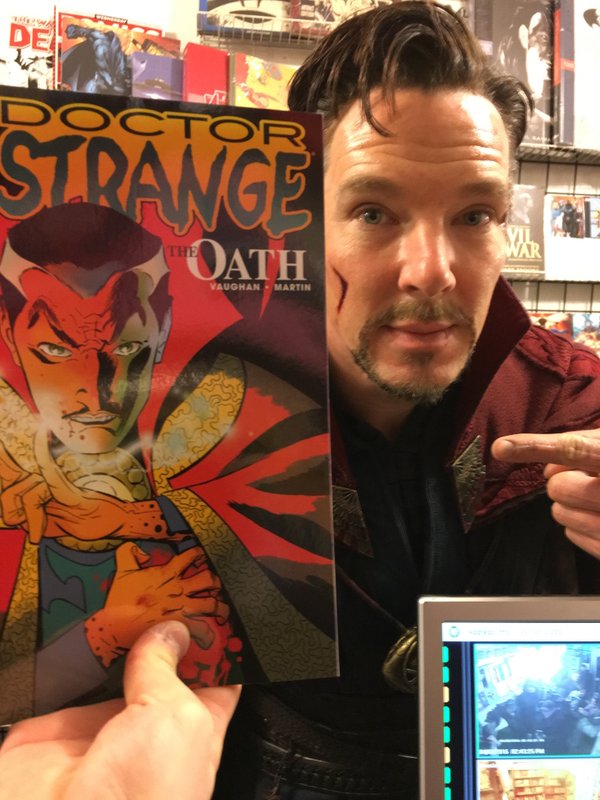 The lucky shop – JHU Comic Books in New York City –  is no stranger to  having special guests pop in for signings and meet and greets, but having Benedict Cumberbatch dressed as Doctor Strange show up to celebrate wrapping filming is unusual even to them.  Rene Rosa, one of the managers of the store, had this to say about the encounter:

Dr. Strange was filming on 32nd street, just mere feet away from our store’s door […].  During the day, the crew came in to check out the place because they were shocked to see a comic book store where they were filming. [At] one point, one of the producers joked about how great it would be to have Benedict come into the store in costume. Of course, I didn’t know he was one of the producers, at the time. I told him that if he did, I would lose my damn mind.

Same, Rosa, same.  But the joke turned serious when “a couple of hours later and in walks Dr. Strange.”  Rosa went on to share just how much the experience meant to him:

I don’t usually get star-struck, but it’s a different situation when one of the best actors of our time is standing before you in full costume, in your store, while filming the big-budget movie of a character you’ve loved since you were a small child. I felt like a 5 year-old.

Read Rene Rosa’s full story at the JHU Comic Books blog here.  And if you are in New York stop by and shop around as a thank you for providing the fandom with this awesome anecdote.  Well done, JHU Comic Books, well done.

Previous:Dark Horse Comics Wants to Send You to SDCC!