What an improvement a week makes! Orphan Black returned strong with “Manacled Slim Wrists,” in that we got see lots of Krystal, the story moved along, and Tatiana Maslany’s real life partner (Tom Cullen) showed up to have a small but hilarious scene with her. We also lost someone close to the Leda story.

When Krystal first arrived to Orphan Black, I thought she was super fun but so over-the-top that I wasn’t sure how she would fit into the series. Luckily they seem to pick her up when they need someone with street smarts who isn’t as rough around the edges as Sarah. Enter Krystal. I can tell how much fun Maslany has playing her, and that scene with Tom Cullen was so much fun (even if it wasn’t completely necessary to the overall story). I was looking forward to more clone playing clone action (in this case, Sarah playing Krystal), but I am glad that Krystal pulled through and got the important information needed to help the Clone Club. 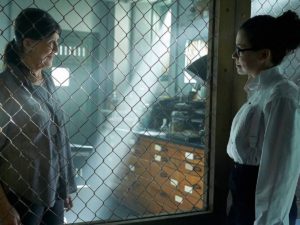 I was a bit worried about Cosima at the close of last week’s episode, but with the help of Ira and Mud, she found a way out. I was surprised at the scene where she revealed to the camp Westmoreland’s secret because Cosima is such a ray of hopeful sunshine and it seemed slightly out of character for her to shatter the dreams of so many. I suppose it was necessary, just surprising. As she was leaving the island, though, I was super nervous that she and Charlotte were going to get caught and would not be able to leave. For now, at least, it looks like Cosima, Charlotte, and the cure have made a safe exit.

Although I have never been a huge fan of Susan Duncan, she has grown on me these past few episodes. I was rooting for her with her plan to take out Westmoreland, so I was very sad when Coady found out the plan, stepped in, and turned on Susan. RIP Susan. I didn’t agree with her plan to harvest Kira’s eggs and implant them into surrogates, but in the Neolution world of batshit crazy, she seemed to have the most sanity.

Going along with Susan’s story, I was glad to see a lot more Ira as well. I feel like Ari Millen has been a source of untapped potential ever since the reveal of the Castor clones, and although we saw a lot of him for a while, I wish we had gotten more in the past two seasons. He really broke my heart as Ira in “Manacled Slim Wrists” though, particularly when he realized that he was not going to get off the island after all of the glitching and discovering Susan dead. His end (although we don’t know if he is dead or alive at this point) felt a little heavy-handed but still a proper send-off for Millen.

We are within the last handful of episodes of the entire Orphan Black series, and it finally feels like they are wrapping things up. I want everyone to have a happy ending, but I fear that the body count is just now starting to increase. Unfortunately we did not get any Hendrixes, Helena, or Felix in “Manacled Slim Wrists” so hopefully that will change next week!