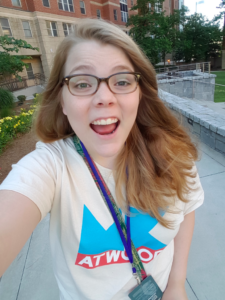 The Steven Universe fan convention Beach City Con, to be held at Virginia Beach in October 2017, has just announced its first official guest: McKenzie Atwood. Atwood is an intern at Cartoon Network, helping develop mobile games such as Soundtrack Attack.

McKenzie Atwood has also developed a large fan following online, running the tumblr pearl-likes-pi, and making Steven Universe themed videos on her YouTube channel, MKatwood. You can find the official announcement in her most recent video celebrating the one year anniversary of her channel.

The Beach City Con Kickstarter launched on September 1st, 2016, with an initial goal of $7000. It reached that goal in under an hour, and now has more than tripled the original amount, currently with $22,000 pledged. The organizers are aiming for a stretch goal of $35,000, for the purposes of bringing Zach Callison and Grace Rolek, voices of Steven and Connie, to the convention. The campaign still has almost a month to go, so if you’re interested in attending or contributing, there’s still time.

The CEO of Saga Event Planning, the company running the convention, explained their choice to use crowdfunding for the event. Although they could have raised money for the convention entirely through ticket sales, the process would have been slow and left the budget vague. Tara explained that guaranteeing a large budget up front “means we can play around with programming with concrete costs – things like buying a small batch of ukuleles, for possible beginner lessons at the con!” They chose Kickstarter specifically because it requires that any campaign reaches its minimum goal for it to receive money, ensuring that donors would not be charged unless they had sufficient funds for the event. They recognize that their stretch goal of $35,000 is ambitious, but stress that they will give donors notification in the campaign’s final days if they wish to withdraw their donations.

There are still 25 days left in the Beach City Con Kickstarter campaign, and still about 100 tickets left at the Peridotite tier.

Previous:Pokémon Sun and Moon Starter Evolutions! Brionne is too Feminine Looking?
Next: LEGO Teams Up with DC Super Hero Girls