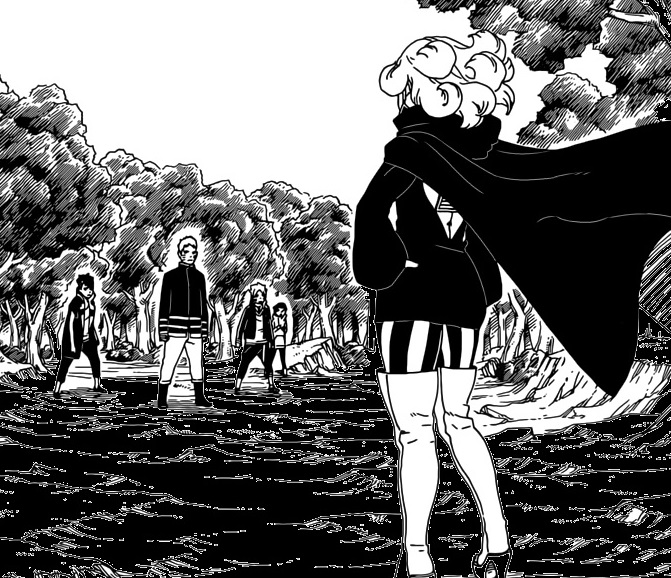 This month’s manga issue of Boruto: Naruto Next Generations offers an enjoyable fight that allows Delta to showcase some of her powers. With ‘Monster’ being a very action-heavy chapter, I’m looking forward to seeing how Naruto is able to handle his current foe.

Mikio Ikemoto and Ukyou Kodachi will need to introduce a very powerful god or a very smart ninja if they want us to believe Naruto can be defeated in battle. Delta isn’t a god and she doesn’t come across as a very smart ninja. That is why I knew Naruto was putting up an act when she was able to injure him. I liked seeing him lead Delta into a false sense of security to make her share valuable information. You can’t injure Naruto unless he wants you to! Ha!

I do think this is a problem the current manga-team continues to face in the Boruto manga and anime series. Any threat introduced in Boruto doesn’t feel serious because you know Naruto or Sasuke will be able to handle it. The same thing seems to be happening with the Kara organization. Even though Delta’s entire body is made of scientific ninja tools and she is able to absorb ninjutsu, you know Naruto can take her out in an instant if the writing team doesn’t deliberately nerf him.

There were a few instances where you could see the writing team hint Delta might be as powerful as Naruto when it comes to physical strength, but then again, you know it doesn’t make any sense. A Naruto clone was able to fight a Madara limbo clone. Delta is nothing, and I can see the fanbase getting quite angry if Naruto loses to Delta due to plot convenience.

The only way I can see Delta continue to give Naruto a tough time is if she keeps the battle inside the Hidden Leaf Village to stop him from using his very destructive powers because he doesn’t want to harm everyone around him.

I can’t wait to find out what happens next!

What did you think of Boruto manga chapter 31? Did you enjoy ‘Monster’? Let us know.