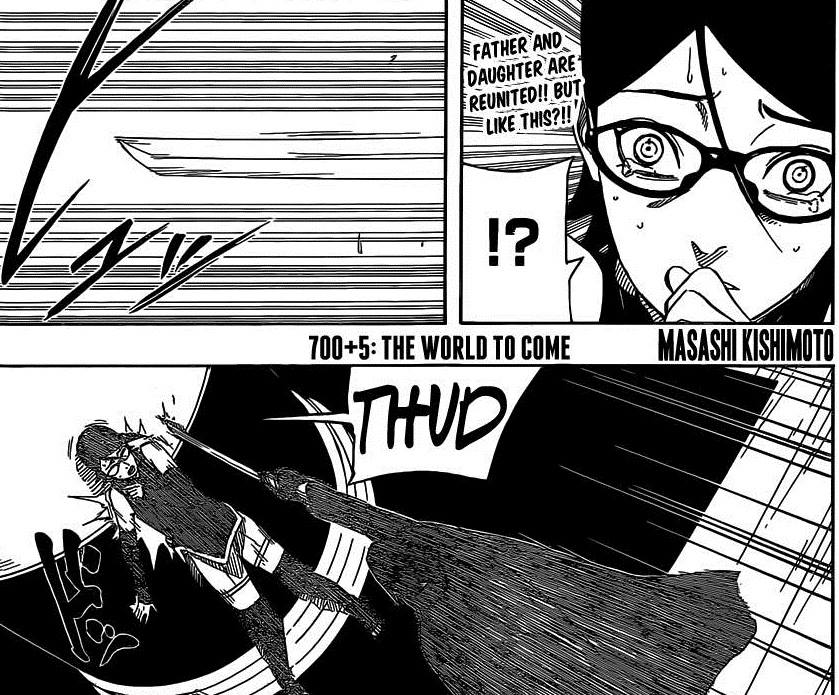 The plot moved a lot further in this week’s manga issue of Naruto Gaiden – The Seventh Hokage: The World to Come. The antagonist directly attacked our heroes and even if I don’t have any idea who he is at the moment, I have to admit that he must have a very dangerous card to play if he’s confident enough to attack powerful beings like Naruto and Sasuke.

The villain attacked both our heroes, and I liked how Naruto looked so annoyed during the encounter. He simply created a tailed-beast cloak to protect himself and Salad, and Sasuke went directly to face the leader. Both Sasuke and Naruto are at demi-God-like levels and our Sharingan spamming villain needs to have a foolproof plan if he wants to fight them both and kidnap Salad.

While the little fight sequence was entertaining, it was the interaction between Salad and Sasuke that made me enjoy the issue. I don’t know about you all, but Sasuke isn’t going to receive the ‘Best Dad’ award anytime soon. Masashi Kishimoto tried to explain his absence from Salad’s life, but it still didn’t do any favors for the character. Even if Sasuke was out on a top-secret mission, it didn’t justify why he never tried to contact his family.

I know that Sasuke isn’t the kind of character who’s open about his feelings, but having such a rude attitude towards his own daughter just didn’t feel right to me. Salad even called him out on his inability to recognize her face. Salad, Sasuke and Sakura need to have a serious talk together, and I’m anticipating how Kishimoto will handle the family dynamics when the time comes. 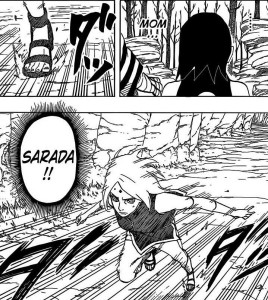 I loved how Sakura looked running to meet Salad. She’s a powerful opponent in her own right and knowing that her daughter is in danger will only make her more brutal. She also needs to give Sasuke a piece of her mind if he’s the reason she’s been stressed out lately.

As far as the plot is concerned, Sasuke went out on a mission a long time ago because he was worried something more dangerous than Kaguya was coming. He shared his concerns at the Five Kage Summit, and I was glad to see Sakura attending it, too. It just went to show that she’s being kept in the mix when the ninja world discusses important matters, and her role in defeating the God-like Kaguya hasn’t been ignored.

What did you think of Naruto Gaiden – The Seventh Hokage: The World to Come? Do you have any idea who the new villain is? Do you think Sakura will end up getting kidnapped instead of Salad? Let us know!