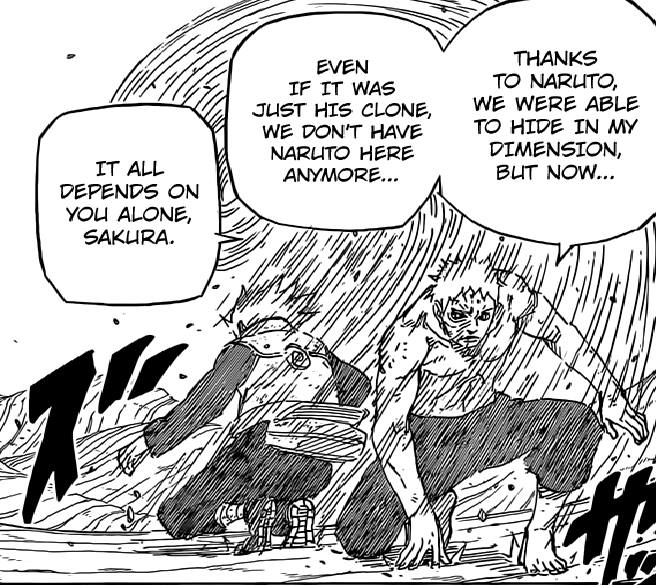 This week’s issue continued Naruto’s fight with the mighty Kaguya. As far as the plot is concerned, nothing really happened until the last panel. However, seeing Naruto change his fighting style and going back to his old ways was quite a treat.

Naruto managed to look trapped in ice in order to lure Kaguya so he could land a hit on her. What I couldn’t understand was why she didn’t hit him with a long ranged attack? I get that she wanted to absorb his chakra but still hitting him with a ranged attack and weakening him would’ve made more sense. Naruto using his brain during the fight was a pleasant surprise. He knew he couldn’t use his Sexy Harem Justsu anymore and realized that a direct assault wouldn’t work against the female ninja. That’s when he used his trademark move, the Uzumaki Barrage, an attack I haven’t seen since Part I of the manga series. Using one of the tailed-beasts chakra he was able to make countless Shadow Clones (another one of his trademark techniques) in order to distract Kaguya and help save Sasuke. It’s obvious that the ying and yang seal bond between the two heroes is strong and it’s something that Kaguya fears. Though Kakashi, Sakura, and Obito arrived at the battle site, Kaguya completely ignored them. I can’t wait to see the look on her face if and when Obito and Sakura are able to stop her from executing her plan. It would be a nice reality check for her that the people whom she thought as insignificant worked together to harm her. If Kishimoto is able to make Sakura useful, it would also show fans who don’t think much of her that she’s the lead female character of the series and is capable of playing a role when it comes to saving the world. As far as Kaguya’s plan is concerned, things still aren’t clear. Why does she want such a huge amount of chakra? She already has the whole world stuck in the ultimate genjutsu but she’s still determined to absorb Naruto’s and Sasuke’s chakra even though Black Zetsu tells her not to.

The art looked amazing, as usual, and I think that Kaguya really is the final villain that Naruto has to face before the inevitable battle with Sasuke. The Endo Tensi Hokages didn’t show up this issue and I think Kishimoto is going to drag that storyline a bit in order to keep fans curious regarding what the Sage of Six Paths tells them. Obito’s plan worked in the end, however, the way the whole sequence played out was a bit confusing. We saw Naruto getting hit by Kaguya’s attack, in full ‘kill mode’ and she was sure she hit the real Naruto. I can’t understand how such a powerful antagonist like her could make such a mistake and not realize that she hit a clone. With Obito and Sakura now in the dimension that links to every other world, I’m curious to see how things work out for them. One of Naruto’s clones is already gone because of the chakra expended on their dimension jump. I’m looking forward to seeing how much chakra Sakura has in her seal and what Kishimoto plans to do with her character once it’s depleted. Her powers are based on the stored chakra inside her body. If she gives away the power of the seal she won’t be able to use a lot of her techniques and her superhuman strength will be greatly compromised. Maybe Kishimoto plans on giving her a powerup at the end of her mission? But then again, Kishimoto isn’t known for giving Sakura any favors unless it adds something to the plot, and then she and her powers lie forgotten for a long time.

What did you think of this week’s issue of Naruto? Do you think Obito and Sakura will be able to reach Sasuke in time? Will the real Naruto and Kakashi be able to hold their own against Kaguya? How was Naruto able to outsmart the antagonist? Let us know in the comments!