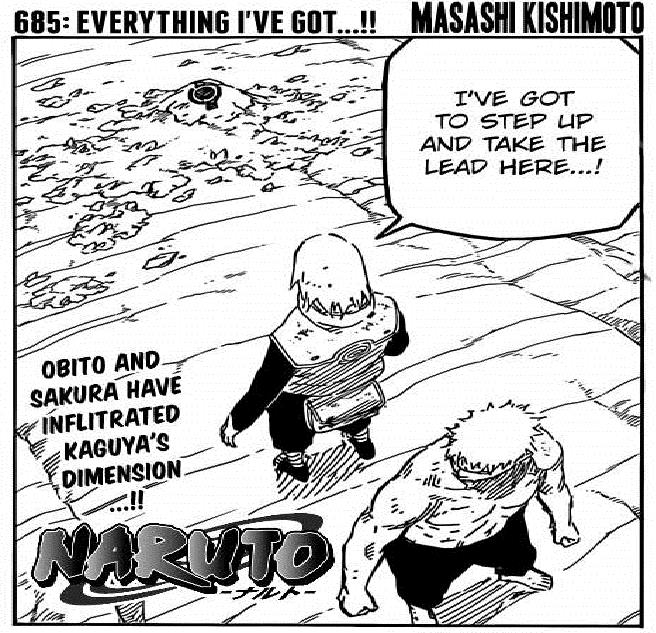 This week’s manga issue of Naruto focused on Sakura and Obito’s will to find Sasuke. I loved Sakura’s role in the issue, and hopefully Kishimoto doesn’t ignore her after this.

I was surprised to see Kaguya being fooled by Naruto’s clone in the previous issue. However, it was revealed that she wasn’t fooled at all. The real Naruto has the Goudoma (Turth-Seeking Balls) levitating on his back, and knew that. So, why did Kaguya allow him to slip into her dimension in the first place when she knew he was going to try and find Sasuke? I think she’s interested in the ying and yang bond between Sasuke and Naruto. Sasuke could even sense Naruto’s chakra though he was in another dimension.

After seeing Sakura and Obito being the only ones left to rescue Sasuke, I was a bit worried. Sakura doesn’t have a good track record when it comes to successfully helping others. She tries to help, but she messes up at the last second. It was a relief to see her failure not being repeated during such a crucial moment in the plot. The issue was clearly created to focus on Sakura, and considering she’s the female lead of the series, she deserves more issues like this one. Even the title was about her determination to do her best to save Sasuke, and help Naruto save the world. The whole ‘dimension jumping power’ isn’t easy, and it just goes to show how much chakra Kaguya has to use the skill so effortlessly.

Sakura’s power of getting herself beaten up in order to help others was shown again. I’m going to keep calling it her power because that’s what she does best! Just a few issues back she got herself impaled by Madara’s chakra stick to create an opening for Naruto and Sasuke, and way back during the start of Part II, she took a beating from Sasori before finally defeating him. Sakura is a resilient character, and I guess that’s what annoys some fans that don’t like her. She just won’t die!

In the current issue, she saved Obito from an oncoming flow of Acid Water, and even though he 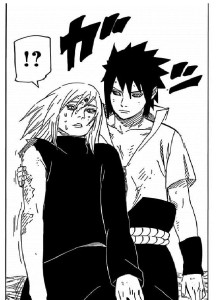 r back and arm got hit, she didn’t stop to rest or heal. Obito wanted her to take a break but she didn’t want to waste the precious opportunity Naruto had provided them with. They finally found the dimension Sasuke was in, and that’s where Sakura gave it her all. It’s been a while since I got to read Sakura’s trademark battle cry: “Shanaroo!!” and that’s when I knew they were going to succeed.

Sasuke’s own ‘jumping’ ability was explained in the issue as well. At first I thought he could jump through space and time, but it turned out that he swaps places inside a certain limit. He swapped his body with the burnt vest Sakura threw away. The fact that he held on to Sakura and didn’t let her fall, even though he didn’t have to, must have made Sakura/Sasuke shippers crazy. I just hope he starts giving her more credit, and stops thinking of her as useless. Without Sakura and Obito, Sasuke wouldn’t have been able to escape from the dimension. A thing that I’m curious about is Sakura’s seal. She still has the diamond on her forehead. Seriously, how much chakra does she have in there? Does that mean she will play a role in the upcoming fight? Let’s hope.

What are your thoughts about this week’s issue of Naruto? What did you think of Sakura? Let us know in the comments!