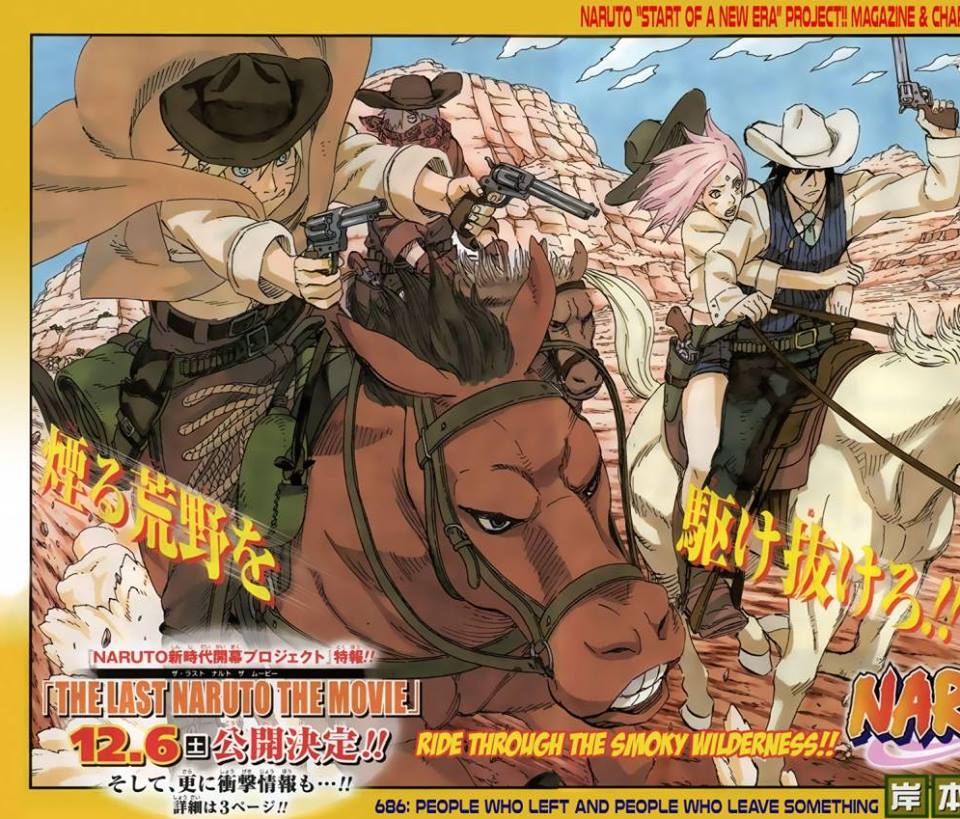 While last week’s issue of Naruto was about Sakura and Obito stepping it up to help Sasuke, this week Kakashi put his life on the line to save the heroes. We got to see another of Kaguya’s dimensions, the Sage of the Six Paths finally talked to the Eno Tensi Hokages, and the end of the series is almost here!

The issue started with a huge announcement. A new Naruto Movie will be released on December of this year titled ‘The Last: Naruto the Movie’. This week’s chapter also marked the beginning of the closing arc in the series. I have been reading Naruto for years, and it’s sad to know that it’s finally ending.

I still think Kishimoto is dragging out The Sage of the Six Path’s interaction with the Hokages. The whole conversation felt like a repetition of things we already know. The Sage stressed that Sasuke and Naruto were important to win the fight against Kaguya and sealing her was the only option. I don’t get it. Wouldn’t sealing her mean that she can be unsealed again by someone years later? Why not end the threat permanently? I’m curious to see how the Hokages will help out Team 7 because the characters aren’t in the same dimension anymore.

This week’s issue was focused on Kakashi. I felt sorry for him when he thought of himself as useless. Having read Naruto from the beginning, Kakashi is anything but useless. He’s the one who taught Team 7 how to fight. He has helped the main characters countless times, and saved their lives. He hasn’t been doing much during the war, but he’s still a powerful ninja. Making Kakashi feel useless was Kishimoto’s way of setting up the events that occurred in the last panel of the issue.

I liked the panel in which Naruto thanked Sakura and Obito and then asked Sasuke if he had done the same. Being the kind of character that Sasuke is he told Naruto to focus on the fight. Sasuke had already thanked Sakura and Obito when they rescued him, and I think they also had some kind of a conversation in the other dimension before coming to help Naruto. Maybe we will get to see the conversation in a flashback because Sakura didn’t look as tired as she was when Sasuke stopped her from falling?

Kaguya took everyone into another dimension where gravity pushed them all 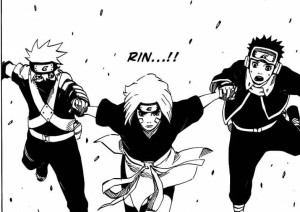 towards the ground. However, that’s where something confusing happened. Even though she’s at a God-like power level, Kaguya couldn’t bring herself to stand in the new dimension. Even Naruto, Sasuke, and Sakura with her superhuman strength couldn’t move properly. On the other hand, Kakashi and Obito were able to run and shield Naruto and Sasuke from the antagonist’s attacks. How is that possible? I guess the thought that Rin was pulling them forward helped those two. Whatever the case, the sequence felt weird and it looked as if Kishimoto was deliberately ignoring things for the sake of plot development.

Obito’s a character that Kishimoto has been trying to redeem for quite a while now. He initiated the Ninja World War under Madara’s influence and because of his obsessive love for Rin. Trying to redeem him in just a few issues doesn’t have much of an effect. Even during his final moments he was thinking about spending some time alone with her, and that’s why he used Kamui to protect Kakashi from Kaguya’s attack. He hasn’t gone through much character development if he’s still obsessed about a girl he fell in love with when he was twelve years old. If he still has some final words to say in the next issue, it would be better if he told Kakashi that he was a good friend and/or paid a compliment to Team 7 rather than remember Rin…again!

Not much happened in the issue; however, it played the role of setting things up for the concluding chapters in the series. With the movie set to be released in December, it wouldn’t be a surprise if the series ends before that.

What did you think of this week’s issue of Naruto? Do you think Obito is going to die? How will Team 7 defeat Kaguya? When will the Hokages arrive? How do you feel about Naruto coming to an end? Let us know in the comments section below!