Marvel’s New Thor is a Woman! 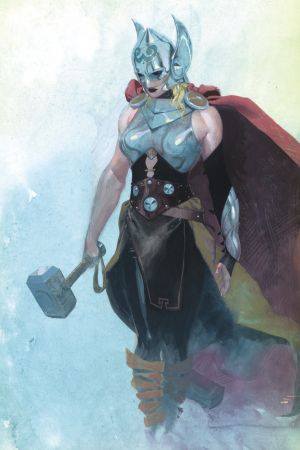 It seems things are changing for the God of Thunder in the Marvel Universe, as come October 2014 a female superhero will be holding the iconic hammer, Mjolnir.

An announcement was made on the ABC talk show The View and the amazing Whoopie Goldberg got to present this new female Thor to the world. There aren’t a lot of details regarding the new story arc, but according to what Whoopie said, the original Thor will be considered unworthy of holding the hammer, at which point it will pass on to a woman. The ladies on the show were excited about the new development, and even praised the new superhero for having better body proportions compared to the rest of Marvel’s female characters. I suppose that her attire does look modest compared to Sif and a lot of the X-Women, but I’m concerned that as the series moves forward her breastplates will continue to grow as she is sexualized the way most other comic heroines are. For me, the best example of a female character whose body isn’t being sexualized (even though she’s running around in swimwear) has to be the new Ms. Marvel, Kamala Khan, and I hope they stick closer to that route with this new female Thor. 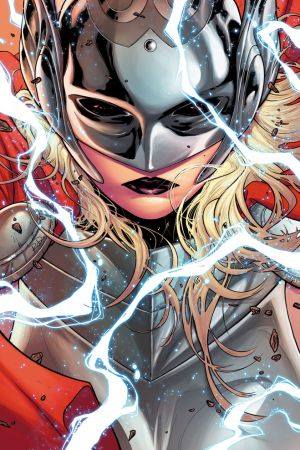 Considering that Thor was introduced way back in 1962, the news that he will be parting ways with his beloved hammer – especially because he will apparently be deemed unworthy of holding it – is shocking. I’m all for more female superheroes in comic books, but is it really necessary for a male character to be disgraced in order for a female to come in? Fellow Geekiary writer and editor, Tara, voiced a similar concern:

“Almost everything I’ve seen so far in the way of comments has been along the lines of, ‘Oh hey, so Thor’s a chick now, awesome!’ But is Marvel maybe trying too hard? This isn’t like DC’s Green Lantern, who has a history of being several different people – this is Thor, the god of thunder, and I can’t see why the change from male to female has to involve the original character doing something that is bad enough that he loses the ability to wield the hammer. But I won’t argue too much, because personally I think that any change is better than no change in terms of the portrayal of superheroines. I’m excited to see where they go with her story!”

The inscription on Mjolnir reads: “”Whosoever holds this hammer, if he be worthy, shall possess the power of Thor.”

So Tara’s concern does look plausible – according to what was said on The View, Thor will be deemed unworthy in the near future, and that’s how the new female hero will take his place. What will he do to deserve being parted with his hammer?

All we know about this new superheroine is that she was saved by Thor, came down to Earth, modeled herself after him, and ta-da! She gets possession of the hammer. What’s so special about her? Details about her identity are still up in the air.

It’s not as if the hammer hasn’t been picked up by other characters from the Marvel Universe before. Storm, Captain America, and Odin – just to name a few – have all held the hammer at some point in Marvel canon. However, none of them took on the name Thor, and I can’t understand why Marvel is making Thor sound like a title rather than the name that it is. Jason Aaron, the writer of the series, has said that the new character isn’t She-Thor, or Lady Thor, but is actually Thor. If she’s Thor, then what name is the current Thor going to go by? I mean, his real name is Thor Odinson. It’s not as if “Thor” is (or has been) a mantle that someone can take over, like Captain America, Iron Man, Ms. Marvel, or even Wolverine.

While DC did a complete reboot with The New 52, it’s good to see that Marvel is evolving the characters in the present continuity rather than trying to re-do everything. There’s been a lot of focus on female superheroes in Marvel, and the team behind the new series is excited about the new female Thor…but I do feel that Marvel is trying a bit too hard to release female-centric comic books. I would have loved if a new female superhero was introduced as her own character, kind of like Kamala Khan, who took on the role due to surprising circumstances. It’s obvious that the female Thor has a connection with Asgard. Maybe she’s someone we already know? Marvel has already given us Thor Girl in the comic books and Torunn in the animated universe. Maybe it’s one of them?

According to Marvel, the new series is supposed to speak directly to the women and girls of America. So why not use already established characters to do so? Why not use Valkyrie, a famous female character from Thor’s world, to talk to the women of America? Why risk fans thinking of this new development as a marketing gimmick: ‘Let’s introduce a new and fresh female superhero to capture audiences, and forget about the ones we already have.’

So what will Thor hold once his hammer is taken away? Rumor has it that he may end up wielding the Jarnbjorn (a battle axe). Who knows if he will get his hammer back; to me, the new female Thor doesn’t come across as a temporary thing.

It seems we will have to wait until October to find out more about the female Thor and her role in the Marvel Universe, but I will admit that an image of the current Thor being turned into a woman by Loki keeps popping in my mind. That would have made for an interesting story!

What are your thoughts about the new female Thor? Any ideas about who it might be? Let us know in the comments!

Previous:Naruto x 685 Review: Everything I’ve Got…!!