New Avengers Issue 9 Review: Up From the Depths 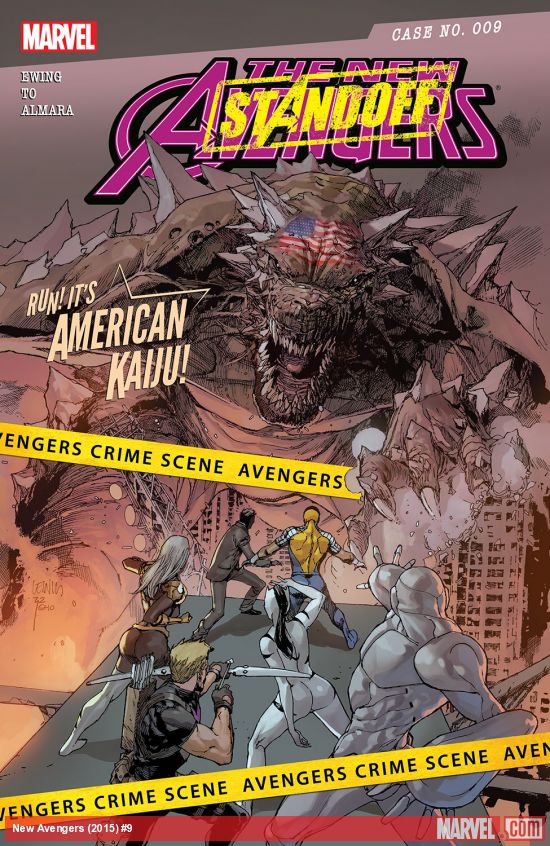 New Avengers continues the Standoff tie-in with issue #9 ‘Up From the Depths’. I knew that a giant Godzilla-type creature was going to attack the young heroes but what I wasn’t expecting was the anime inspired Kaiju route the story would go in, complete with giant Kaiju fighting robot!

After getting Rick Jones away from S.H.I.E.L.D., the young superheroes, now operating under the name A.I.M, have more than one foe to deal with. While writer Al Ewing has done a good job with the current series, there are still a lot of questions regarding the plot as a whole. We are nine issues in and readers still don’t know how these young super powered beings came together. The fact that the team feels kind of created out of nowhere also doesn’t sit well with the All-New, All-Different Marvel Universe. The higher-ups in S.H.I.E.L.D. don’t trust them and neither does the United States of America. Why did Sunspot select the current roster of heroes? What led him to take control of A.I.M. and operate in such a manner? I need answers!

However, that is not to say that the current New Avengers series isn’t entertaining because it is. The young heroes don’t necessarily gel well together and that gives rise to some very interesting character moments for everyone. Also the earlier arcs of the series were all about Wiccan and Hulkling so that is a big plus. Al Ewing has what it takes to take this series to even greater heights and really explore the unique dynamics within the team. I would like to read a couple of issues where the members sit down and talk to each other. Ava lost her White Tiger powers and I want to know how she’s dealing with the loss. 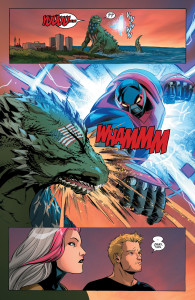 Coming to the events of ‘Up From the Depths’, it turns out that the U.S. Army had been busy designing a super soldier which ends up creating a giant lizard monster instead. Now, I have no idea why Sunspot already had a giant robot to fight such a threat. I guess when you are in charge of a team of the world’s greatest scientists, you tell them to create weird things just for the fun of it.

Artist Marcus To is clearly having fun with the series and his Avenger Five robot does look impressive. I wonder what kind of firepower it is packing.

Songbird and Hawkeye also had a little conversation during the attack. I don’t know the reason behind Songbird spying for S.H.I.E.L.D. Hawkeye was clear that the New Avengers were his friends and he didn’t care about S.H.I.E.L.D. anymore, especially after their secrets were exposed by Rick Jones. So, there is a possibility that Songbird might have a change of heart and side with Sunspot too. Let’s see.

The final panels of the issue showed S.H.I.E.L.D. stepping in to arrest A.I.M. while the Avenger Five was busy fighting the American Kaiju. With only one more issue left until the conclusion of the Standoff tie-in, I’m looking forward to seeing how A.I.M. will change and what it means for the New Avengers because currently Wiccan, Hulkling, and Squirrel Girl are the only ones going by that name.

Right after the conclusion to the Standoff tie-in, the New Avengers will have to face Civil War II. This team of young superheroes clearly have a lot of things to go through in the coming months.

What did you think of New Avengers #9 ‘Up From the Depths’? Did you enjoy the debut of the Avenger Five? Let us know!

Previous:“Once Upon a Dream” Puts a New Spin on a Classic Tale
Next: First ‘Doctor Strange’ Trailer to Debut Next Week on Jimmy Kimmel Live!