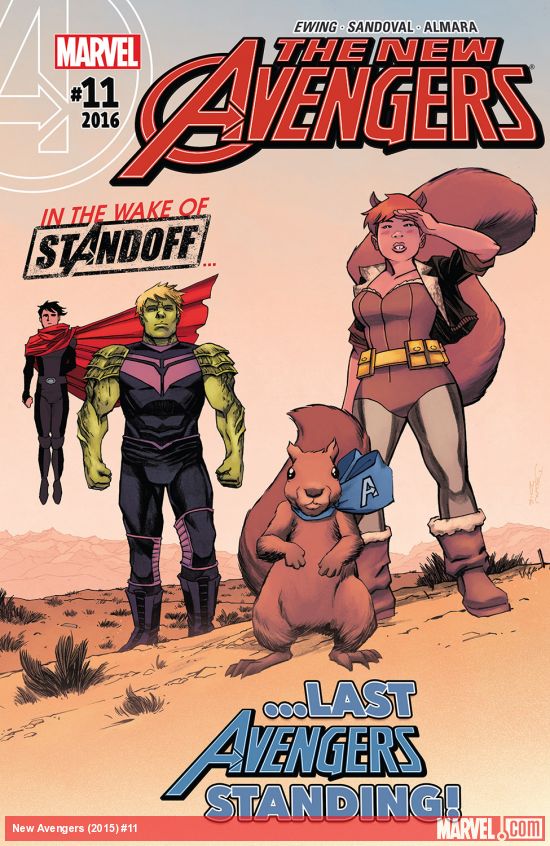 The New Avengers Issue 11 picks up in the wake of Standoff and shows what Wiccan, Hulkling, and Squirrel Girl have been up to after being taken out of the team by Sunspot.

While I enjoy comic book stories that have a lot of action, I also appreciate writers taking time to show characters deal with the events they have experienced. Sunspot expelled Wiccan, Hulkling, and Squirrel Girl from the team after they voted against him regarding how he wanted the Whisperer to be rescued. However, it was revealed that Wiccan, Hulkling, and Squirrel Girl were now the only three New Avengers while Sunspot and everyone who sided with him were now operating as A.I.M.

After being separated from their previous team, it made sense that the three young heroes didn’t know what to do. On top of that, Wiccan’s also confused about his superhero name. I enjoyed the conversation Billy and Teddy had with the Scarlet Witch, even if it felt a bit creepy at times. Not only did she want those two to get married as soon as possible (you and I both, Wanda!) she also helped Wiccan understand the meaning of names. A superhero name bonds with a person and in a sense becomes a source of power for him or her. Wiccan has the ability to create worlds – one would even argue that creating universes is his destiny – but the young hero is unsure about embracing the responsibility that’s been put on his shoulders.

With the present world still having villains to fight, Billy, Teddy, and Doreen have a conversation about the name of the team they should operate as. Wiccan and Hulkling were introduced to the world as the Young Avengers. However, they realized that they weren’t kids anymore and after a bit of thinking they decide to continue working as the New Avengers even if there are only three of them right now. Well, four if you count Doreen’s squirrel sidekick, Tippy-Toe. Their choice to be the New Avengers plays a part in the greater scheme of things and I’ll get to that in a bit.

Seeing Hawkeye frustrated over not being an agent of S.H.I.E.L.D anymore made me feel sorry for him. He isn’t part of the big leagues anymore, with Iron Man and Captain America leading their own separate teams of Avengers. He was sent to the New Avengers as a spy but ended up helping the young heroes fight against S.H.I.E.L.D. He clearly needs some sense of belonging. Again, his decision to be part of Wiccan’s New Avengers seems to point towards bigger things to come. 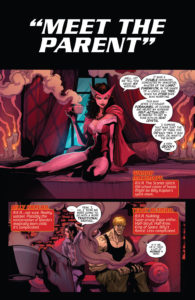 Now, let’s talk about the writing and the overall plot of the series. I don’t know what Al Ewing has planned for the young superheroes in the long run, but if the current arcs are any indication it’s going to be amazing. The whole Standoff tie-in was full of surprises and told readers a bit more about Sunspot’s plans. He had a secret headquarters in the Savage Lands, and everything (and I mean everything!), from letting Wiccan, Hulkling and Squirrel Girl go, to Songbird revealing herself to be an agent of S.H.I.E.L.D, to Hawkeye joining Wiccan’s team, etc. was all part of a Sunspot’s plan. How much of a mastermind is Sunspot anyway? What is his endgame?

The only thing that doesn’t work in favor of this series is the art by Gerardo Sandoval. I’m just not a fan of his style. He has ruined characters for me. Especially Hulkling, who looks like a massive green ogre whenever Sandoval draws him. I wouldn’t even recognize Wiccan in the panels if it wasn’t for his costume and other characters saying his name. Marcus To did a wonderful job with the art during the Standoff tie-in issues, and I want him to return to the series.

Some thoughts and questions!

Have you read New Avengers Issue 11 yet? What did you think of it? Let us know!

Previous:Star Wars Celebration 2017: Is Orlando the new Star Wars Capitol?
Next: Naruto’s Fate Revealed in ‘Boruto’ Manga: Comes Across as a Cheap Gimmick