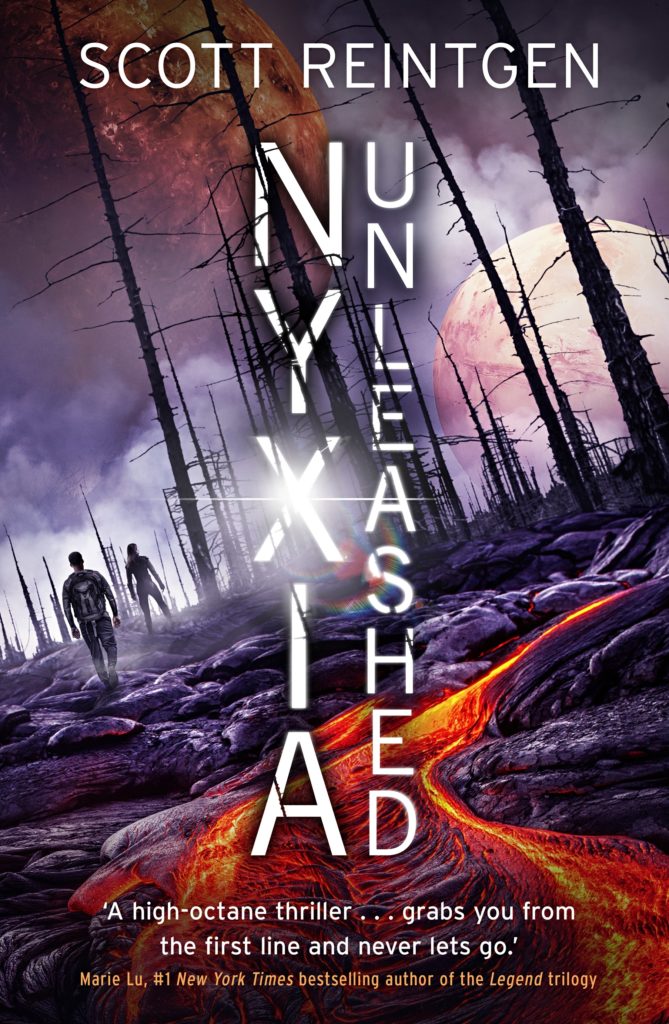 Return to Eden and our intrepid heroes from Genesis 11 and Genesis 12 in Scott Reintgen’s Nyxia Unleashed, the second installment in his Nyxia Triad series. Nyxia Unleashed delivers on a lot of what was promised in Nyxia – namely, ALIENS – but it also manages to fall short in a few ways.

Nyxia is The Hunger Games meets Ender’s Game meets Red Rising. Ten children are plucked from poverty by a giant, stereotypically evil corporation who somehow managed to secretly discover an inhabitable planet out in the far reaches of space, populated by sentient beings, and royally screw it up. Nyxia Unleashed picks up from the moment we left off in the first book, with Emmett plummeting to the planet after being forced to fight Roathy for his chance at a lifetime of wealth.

Unsurprisingly, it doesn’t take long to realize that Babel lied, more than the Genesis kids realize. Basically, Babel has lied about everything – sending them home, their entire purpose for the mission, the alien species…everything. In this way, Babel becomes an even more stereotypically evil corporation, one that must now be defeated at all costs. The problem with this is that Babel is – at least by the end of this book – seemingly undefeatable. An enemy that is all-knowing and all-powerful is boring, and we can only hope that Anton’s actions in the closing pages of the book will have some kind of effect on the plot, otherwise what even is the point?

Nyxia Unleashed delivers on a lot of promises from the first book. Almost the entirety of the action takes place on Eden – actually, Magnia, because isn’t it just humanity’s way, to name something that already has a name – and there are a lot of descriptions of the local wildlife, the dominant species (called the Adamites by Babel, they are actually called the Imago), and their cities and technology. The planet has two moons, and it changes names dependent on the season. A lot of the wildlife merged, but there are some animals called Primes that are still in their original form. It’s actually quite fascinating, although a lot still relies heavily on ever-present, all-powerful nyxia, the answer to questions you haven’t even thought of yet.

The plot is also much more interesting as we delve further into the series. Nyxia got a little repetitive with the constant competition, but as soon as the kids land on Magnia, we learn that something is rotten in the state of Denmark. Uncovering Babel’s lies, and in turn the deceptions of the Imago, was a way more thrilling read than paging through simulated battles and whatever drama was happening on the ship.

Unfortunately, the characters continue to suffer. Reintgen gets major props for a multi-national cast of characters; the Genesis kids were chosen from countries all over the world. While the main characters are American, Emmett is a black boy from Detroit and Morning is a Latinx from California, and the white characters are from more ethnically homogeneous countries like Sweden. In Nyxia Unleashed, we learn that two of the boys from Genesis 12 – Anton and Alex (who we sadly know very little about, since main POV character Emmett was on a different ship) – are in a relationship, which is refreshing after the astonishing heteronormativity of the first book. Even though there’s a lot of diversity, the characters themselves lack a lot of depth and development. We can see growth in them – especially in Jaime and Longwei – but we know so little about them as people that the losses we suffer aren’t felt the way they should be.

I did enjoy Nyxia Unleashed, as I enjoyed Nyxia. What it lacks in depth, it makes up for in plot and spectacle. I’m looking forward to the conclusion – Nyxia Uprising – because I just want to know what the heck is going on! Both of these were pretty quick reads – perfect for summer!

Nyxia Unleashed by Scott Reintgen is published by Crown Books for Young Readers and will be available July 17 wherever books are sold.