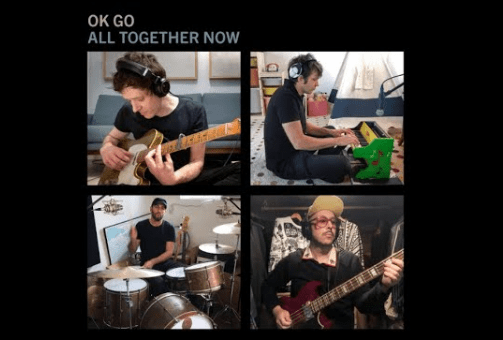 My love of OK Go dates all the way back to the infamous treadmill video, which was one of the first truly viral YouTube sensations back in 2006. But they just kept churning out absolutely masterful music and videos like their aerial shot ‘I Won’t Let You Down‘ video, cute dog-assisted ‘White Knuckles‘ video, and zero gravity ‘Upside Down & Inside Out‘ video.

And those are just some of my favorites. Their list of absolutely stunning works is very long and if you want me to just keep throwing fantastic stuff at you, hit me up on Twitter. I’ve got a lot and love to share my love for this group!

Now here we are, smack dab in the middle of a major global event, stressed and uncertain about the future, and dealing with a churning storm of complicated emotions with few outlets available to sort them out properly.

A lot of times people like myself turn to media as an outlet, but that’s been difficult. Many traditional creative productions have struggled to continue making content due to the stay-at-home order in various regions around the world. Access to things like studios and professional equipment has been incredibly restricted. Everything from music to television to film has been put on hold as the world shelters in place and waits for the virus to subside enough for things to get back on track.

The lack of new content from our favorite media content creators is a blow for those of us who desire new material to keep our own extreme anxieties at bay, but it’s all together understandable because, as I mentioned in last week’s Black Mirror piece, creatives are people, too. Their safety and health – both mental and physical – are incredibly important. Everyone is going through this – creatives included. We can’t go out, and neither can they.

But OK Go, the ingenious group of musicians that they are, have managed to put together an incredible piece of music that’s sensitive to our situation, creative, relatable, inspirational, and altogether calming in these troubling times.

As band member Damian Kulash once put it, they are very much a ‘do-it-yourself’ band, so if anyone was going to be able to produce something this delightful under these circumstances, I have no doubt it would be them. And, thankfully for me, they are one of my biggest sources of positive vibes so I feel like I’ve been personally given a huge gift in this dark period.

The piece is accompanied by an essay by Kulash, who dealt with his own encounter with the virus in the very early stages of the outbreak. It goes over how he’s processing the complex emotions surrounding this huge global event, which is as relatable as it is inspirational. Our circumstances were different (I did not get sick, but my girlfriend did), but it still puts the emotional roller coaster that I’ve been on these past couple months into a new perspective.

The entire essay is worth a read for the full context, but this particular bit struck a chord with me and allowed me to process my own complicated emotions in a new way:

When the status quo evaporates, anything is possible, for better or for worse. Crises are when we learn who we are. Without our frame of reference, we reinvent ourselves. Our best and worst impulses struggle against each other anew, and while our darkest fears become more real, so do our wildest hopes. “Change is not only possible, we are swept away by it.”

Rebecca Solnit makes the case [in her essay ‘The Impossible Has Already Happened: What the Coronavirus Can Teach Us About Hope‘] that this is as true for our society as it is for ourselves: Governments have made changes which were unfathomable only a few months ago. Ireland nationalized its hospitals. Canada and Germany have figured out forms of basic income. Thousands of non-violent inmates have been released from the US’s broken prison system.

My neighborhood, like many around the world, raises a cheer for frontline workers every evening. The ritual is more than just a show of gratitude, it’s a vehicle for the kind of hope Solnit writes of, the subtle feeling I was trying to pin down. We’re telling each other we believe in one another. We’re reassuring ourselves that human goodness is rugged, that our capacity to care for each other is less fragile than our individual bodies, that we can choose compassion for others over the comfort of our routines.

With Kulash’s words in mind, and his analysis of Solnit’s essay as a launching point, I highly recommend you watch the below-embedded video. Maybe you too will feel a sense of relief in knowing others are going through the same complicated, messy, confusing emotions that you are going through.

The profits from the video will go to the charity Partners in Health, an organization that helps bring quality healthcare to the most vulnerable populations in the world. If you donate through their link, you’ll get the “All Together Now” mp3, coloring pages, and “more.” And also “a warm feeling in your soul.”

New music, coloring pages, and happy vibes are basically exactly what a lot of us need right now, so go donate if you can.

Currently, the world is super weird. It’s okay to not have a thorough grasp on what you’re feeling or to not quite be able to put things into words. I hope you’re able to find some outlet that works for you, and some new content to help if that’s one of your coping mechanisms. And, at the very least, I hope this video and Kulash’s accompanying essay can give you some of the relief that it gave me.

Be well. Take care of yourself. Wash your hands.