By some very good luck, I found myself in front of three members of the cast of Once Upon A Time at my time at Wizard World Des Moines. I have never had three castmembers from one of my favorite shows in my hometown before, and although we didn’t get many spoilers about season six, we did receive some insight as to the actors who play these “wicked” characters.

WARNING: This post contains spoilers for the end of season five and speculation about season six.

The quite hilarious panel included Sean Maguire (Robin Hood), Robbie Kay (Peter Pan), and Rebecca Mader (Zelena/Wicked Witch), so of course, we had two of the most evil characters on the show as well as the latest casualty.

Speaking of that casualty,

our moderator asked Maguire how the writers broke the news to him that Robin was going to be killed off. “We had a conversation on the phone because the writers are in Los Angeles and we make the show in Vancouver, so we had a conversation the phone back in January and they sort of explained what they had in mind. Now I’ve died on the show. And it’s not like other shows where, well, it’s not quite as final on Once Upon A Time as it is with others, but also the guys are incredibly clever and I think part of the appeal of Once is it does take you to those places and makes the audience go ‘Oh no!’. I’ve seen a lot of stuff on social media, some people are angry or upset about Robin’s death but I still feel that the show is about hope, and I hope that the viewers stick with it and see where [the writers] go with it because they’re extraordinarily clever guys.” After hearing this in person, I do feel that there is hope for Robin to come back (not that I think Maguire knows or spoiled anything–he just genuinely trusts the writers and recognizes the precedent from other characters’ stories.

As far as Regina’s broken heart over losing yet another love, according to Mader, she felt heartbroken over learning that Zele

na and Regina did have a past. “When I first read episode 519, ‘Sisters’ I think I cried about five times. I did not see that coming that they had known each other the whole time and used to love each other; it was such an emotional, intense twist. I think that had a huge impact on then my future feelings for my sister because they were sort of developing anyway, but then to realize that we loved each other once, that was a huge part of our relationship. I love the fact that I chose her over him (Hades); that was really beautiful in a way.”

According to Kay, he was surprised but happy when he learned he was coming back to the show. He joked, “In a couple season’s time, I’ll come back again and do the rounds, threaten a couple more people and then I’ll leave again. Come back in season 15…but Peter Pan might start looking a little bit older by then.” He also went into how he learned about who exactly he would playing on the show, and it was not immediate. “They didn’t actually tell me my age or my status in the family until about the third episode that we were shooting, and they called me into the office and were like, Rob Carlyle is your son, and I was like, Oh, thanks for telling me.” Needless to say, he was surprised but he loved the challenge.

The audience questions were actually really good and challenged the actors on how to answer. One of my favorite fan questions was about when the actors we 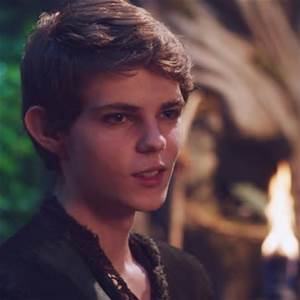 re young, were they fans of superheroes or villains and if that affects how they choose roles. Kay said that he was a fan of superheroes because of the optimism that was instilled in them, although he mentioned that he really enjoys anti-heroes, someone who has flaws like Batman. Maguire and Mader agreed, but Mader went further saying that she loves a reluctant hero, someone who feels overwhelmed with pressure to save the world. Maguire mentioned that even though he loves heroes, playing the villain is more fun and they get the best lines, and even sometimes great comedy.

Another great audience question was regarding the set, as in, what item from the set would they steal? They all came to a common answer: the vehicles. Maguire loves Cruella’s car, while Mader thinks she would love Mr. Gold’s car. Truthfully, I would love Emma’s car.

After seeing this panel, I definitely gained an appreciation for these three actors. They were SO MUCH fun. And Rebecca Mader is exactly like Zelena, only good and hilarious. It was a lot of fun. Ultimately, they all seemed to say that this show is all about the journey of the character and the audience getting to know all facets of the characters. Not all characters are truly good or truly bad; they have instincts and react to events based on those instincts–it is a definitely a bit of yin and yang for all characters on the show. Once Upon A Time is one of my favorite shows and I cannot wait to see what happens in season six, and also how I will see the show differently after getting the chance to see the actors.

Tags: once upon a time, wizard world