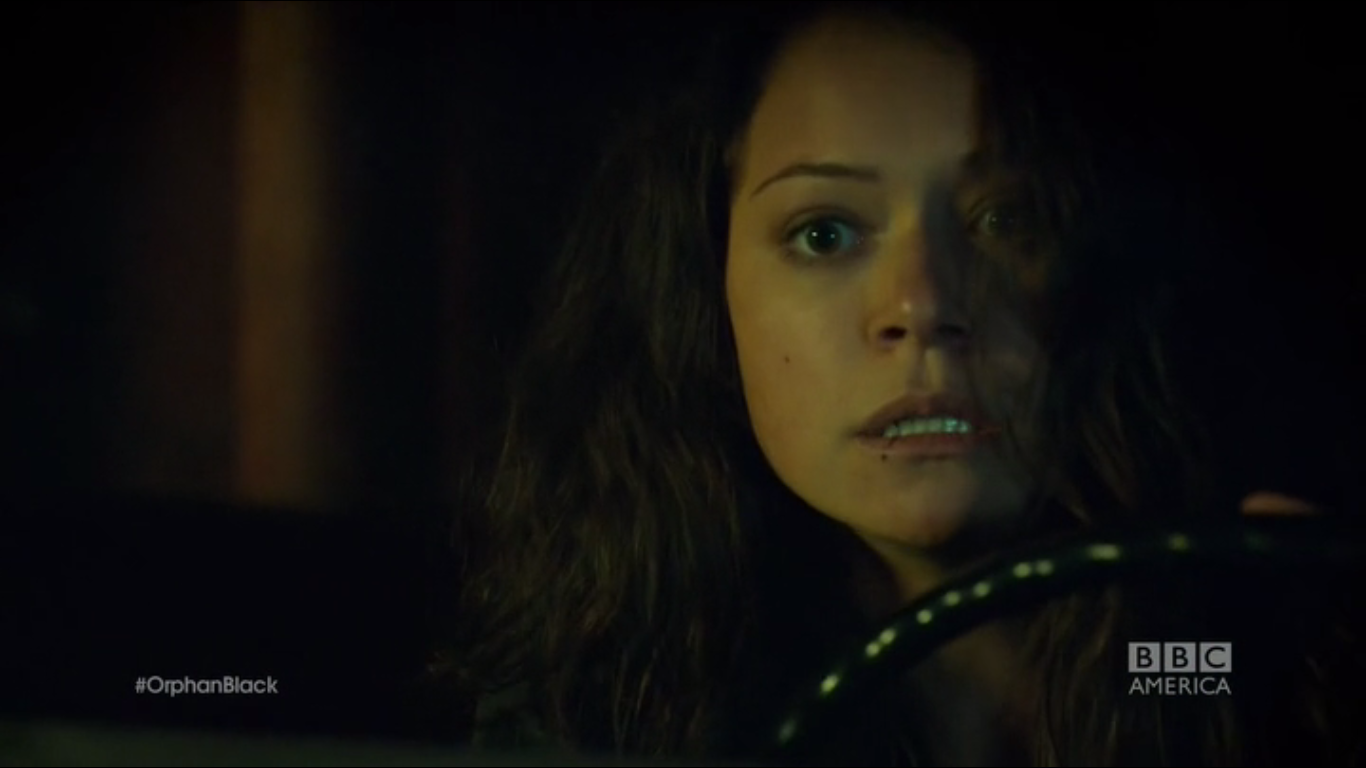 The relationships between these characters moves me unlike any show on television.  They are all so unique and fit together in such interesting ways that I often forget that more than half of them are played by the same actress.  The plot and character development in this episode moved far quicker than I was expecting, but this show kind of has a way of racing forward at light speed.  While other shows might keep tension going and prolong inevitable development, Orphan Black doesn’t hold any punches. 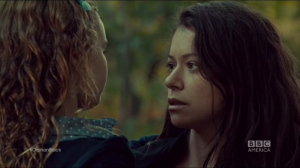 It looks like my initial assumption that Mrs. S escaped with Kira was actually correct, but it was a lot more complicated that a simple grab and run.  They put on a quite a show to escape with the girl in order to throw people off.  This episode has definitely sealed my opinion of Mrs. S.  I had my doubts for a long time, but she more than proved that she is absolutely on Sarah and Kira’s side.  I actually feel pretty bad at how much I doubted her because she proved to be a ruthless badass in her defense of Sarah and Kira.  Whether Sarah trusts her or not is a little bit ambiguous.  She did drive off and leave Mrs. S behind at the compound, but that seemed to be Mrs. S’s choice to stay behind as she stepped out of the way pretty easily.  We also have Sarah’s mother’s final words, which cast a large shadow over Mrs. S’s true identity, so Sarah does have good reason to be suspicious of her.  Sarah didn’t witness her pinning that woman’s hands to the table with a knife and prong or shooting her at point blank range with a rifle.  We definitely have a better understanding of Mrs. S’s motives that Sarah does at this point and I’m sad that this might have been the last interaction we see between them.

It was also great to see Julian Richings make an appearance.  I’ve got to confess that when he appeared I said “helloooo Death” at my computer monitor.  He’ll always be Death from Supernatural to me no matter what role he plays.  This time he plays Kira’s kidnapper, who has been working with Mrs. S on behalf of the clones.  As his character has already departed from the main group I’m not sure if we’ll see him again, but it was a nice treat while it lasted.  He’s got an unsettling aura about him that adds a heaviness to any role he’s given so I kind of hope he makes a reappearance at some point. 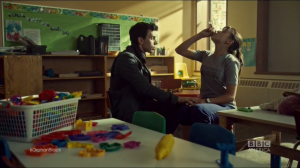 Meanwhile in Alison’s neck of the woods things aren’t going so well.  A well timed glimpse at Donnie’s text messages confirmed to Alison that her husband is her monitor.  The relationship between Alison and Felix continues to grow throughout this crisis.  She confesses to him that she killed Aynsley before telling anyone else.  She even begs him to not tell Sarah or anybody else  what she’s done.  It’s clear that out of all the people she’s met since she discovered she was a clone, Felix is the one she trusts most.  She may have trusted Beth more, but we weren’t given much information about the true depths of their relationship so it’s really hard to say for sure.  Either way, it’s obvious that she trusts him more than either of her clones.  It’s upsetting that the episode ends with her feeling abandoned by him because I want their friendship to keep growing.  While drunk and drugged Alison can be pretty funny, it’s also really sad that she’s doing it to numb her pain.  It hurts to see her in such a crisis all by herself.

Helena has been taken from the hospital by the Prolethians and we’re getting a more detailed look at this mysterious religious sect.  They live on some sort of compound and the followers all dress in very conservative, outdated fashions.  They have an enormous amount of knowledge about who Helena is and how she fits into the whole clone conspiracy, so I’m extremely curious about their origins.  Now that they know that Helena’s twin is capable of carrying a child, eyes have turned towards Helena to see if she carries the same anomaly.  I have a general aversion to pregnancy body-horror plots, so I hope they don’t make her have a forced pregnancy.  It would definitely lessen my enjoyment of the show, but it does seem like a possible next step for her character.  Whatever happens to her, I’m looking forward to her fully waking up and being her snappy, quirky self.  I love Helena more than I probably should, but I’ve come to terms with that.  Long live Helena!  I hope your future is brighter than the horrible reality you’re currently living in. 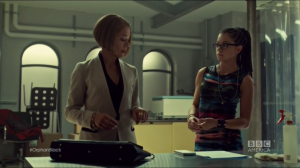 The scene between Cosima and Rachel Duncan was by far the most uncomfortable, but interesting scene of the season so far.  I’m surprised at how much we learned about the clones in just a couple of short minutes, but I suppose that makes sense considering they are the most knowledgeable of the clones.  Cosima has her scientific background and Rachel was raised in the organization so any interaction between them is going to be heavy on information.   As I theorized last season, Sarah’s ability to have children makes her unique among the clones.  Cosima’s sexuality also sets her apart if Rachel’s reaction is anything to go by.  Not mentioned, but still interesting to note, is that Cosima is the only clone so far that wears glasses.  There are subtle differences between the clones and it may be attributed to the actual cloning process.  Rachel seemed to indicate that Katja’s illness was due to the cloning process, so it stands to reason that these other anomalies might also be attributed to this.  Now that Cosima is investigating their genetics, I have no doubt that we’ll get answers to some of the mysteries.  At the rate that this show goes, we may get them in just an episode or two.

In last week’s review I said I wanted three things and I’m surprised I got two of them by the second episode.  Kira and Sarah have been reunited and Felix and Alison’s relationship continues to develop.  While I am sad about the current state of Felix and Alison’s relationship, her depression about him leaving does indicate that she trusts him and relies on him a great deal.  I hope they can reunite and continue to foster that. Now all I need is for Delphine and Cosima to have complete trust in one another and I’ll have all of the character relationships I’m craving for this show.  But hey, two out of three in two episodes isn’t bad.  I’m excited to see what else this story will bring.