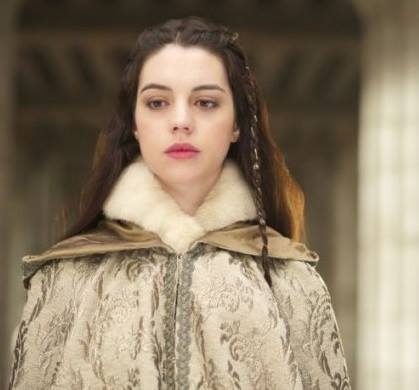 It appears things will never be as they once were.  No matter how much Mary and Francis love each other, their loyalty to their countries will always be something that divides them.  The royals might be having woes when it comes to love, but Mary’s ladies, Greer and Kenna, found nothing but riches.  We’re getting into the final stretch, with only three episodes left in this season.  So let’s jump into my thoughts on “Toy Soldiers”. 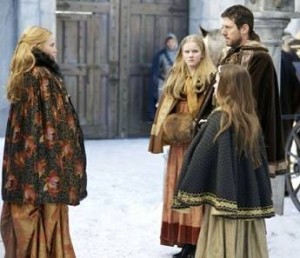 This episode saw the return of Lord Castleroy, to my extreme delight!  He really stepped up to the plate and put Greer’s father in his place.  I wanted to reach through the tv screen and give her father a good smack across the face when he was demeaning Greer throughout the episode.  Castleroy reminded me of a much warmer Mr. Darcy, as he was so generous with his wealth and offering dowries for all of Greer’s sisters and insisting Greer have the final say on who the girls married.  I love how much Castleroy respects Greer and values her as more than just a pretty face.  We even saw Greer warm up to him, the two sharing a kiss at the end.  I really liked Leith, but Castleroy has really grown on me and has been kind and understanding with Greer throughout their courtship.  I can’t wait to see how the writers develop their relationship in the second season and if Leith will make a reappearance, lest we forget about Nostradamus’ prophecy about the man with the white mark on his face.

Kenna and Bash spent most of this episode in the bedroom, in varying stages of undress and sexual activity.  We saw Bash leave the room once, only to find Mary and Francis sharing a tender moment.  This prompted Bash to rush back to Kenna, intent on consummating their marriage.  Kenna was very perceptive, knowing there was still a part of Bash that cared for Mary, and tried her best to pull him out of his head to better focus on her.  Meanwhile Penelope tried to fake a pregnancy in order to regain Henry’s favor, but my lady Catherine saw right through that.  Instead she recruited Penelope to become one of her lady spies, much like the one who informed Mary of the secret marriage contract, to sleep with men for their secrets.  I think Catherine sees a bit of herself in Penelope and wants to properly cultivate that same scheming spirit to her advantage.  I’m interested to see if we will see Penelope return to court and how she and Catherine will work together in the second season. 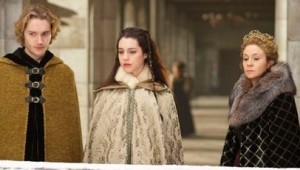 One month after the events in “No Exit” found Mary with her ladies engaging in a snow ball fight.  Things between Francis are still strained, but as Mary mentioned, they could be in the same room without shouting at this point.  But as things go on this show, the frivolity could not last for long, as Mary received more bad news from Scotland: her mother was in danger of being overrun by the Protestants that have been gathering their forces.  But that news was quickly pushed aside for more “pressing” matters.  Henry had worked himself into a lather with the dying English Queen Mary’s announcement of her heir: Elizabeth.  As he has made no attempts (aside from empty declarations to the French court) to persuade the English queen to appoint the Scottish Mary as her heir, it baffled me as to how he could be so upset.  If he really wanted to push Mary as an heir to the English throne, he should have spent more time trying to work out deals with the English rather than fooling around with pretty ladies at court.

But the actions of the English Mary mattered little to our Mary, who was more concerned with the safety of her mother and her country.  At the beginning of the episode, we saw a lord taking a young boy from his mother after the boy’s older brother had been killed in battle, giving the mother a bag of coins in exchange.  This man was later revealed in the episode to be Mary’s uncle, Christian (historically named Francis), the Duke of Guise.  This man has been massing quite the large army but had been deemed untrustworthy.  What I loved about this episode is that it gave history buffs like me some historical context about where we are in the story of Mary Queen of Scots.  The sequence of events might be a little off, but the things happening in this episode are based on real events.  In the episode, Mary wrote to her uncle, hoping that family loyalty would mean something to him and he would help her send aid to her mother.  But Christian seemed to be more interested in a “you scratch my back, and I’ll scratch yours” type of arrangement, agreeing to help if Francis would appoint him to be his Lord Magistrate when he became king.  I think that with the way they quickly introduced the English Queen Mary’s decision about the line of succession after Mary received the news from home, we all knew the needs of France would be put above the needs of Scotland.  In this week’s episode, I can’t help but side with Mary, as Francis has too often given her only empty promises in regards to helping Scotland.  But that doesn’t mean I don’t admire how well Francis did in this episode.  In the past few episodes, we’ve seen Mary come into her own as a ruler and in this one, we saw the same development in Francis.  He show great political and military savvy, turning his father’s grave mistake in sending troops to Calais into a possible victory.

For those who might be a bit confused about the importance of Calais, allow me to give you a brief history lesson.  Calais was a 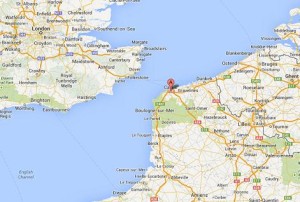 region of France that was an English occupied territory from 1346 to 1558.  It was a major port of trade for the English, although by the time that France reclaimed it, “England was focusing its trade on the Netherlands.”  The battle that Francis and Christian are riding off to actually happened, and as I said, this is a treat for me, as I have been craving some historical context and grounding to this story.  Turning back to the more personal side of the story, while Francis and Mary might have had a sweet send-off in the end, we could see the rift between them growing.  I think this might be something that comes into play in a bigger way in the second season, as tensions in Scotland grow, making me curious as to whether we will actually get to visit the Scottish court.

With only three episodes left, it will be interesting to see where things end in the season finale.  If you’re a fan of theorizing, check out this article for a very interesting theory about who the boy with the tennis racket might be!  But before you do, tell me about your thoughts on “Toy Soldiers”.  Do you think the divide between Mary and Francis will grow wider as the tensions between their two countries grow more heated?  What do you think of the endearing Lord Castleroy?  Comment below and thank you for reading!

Photo of Calais from Google Maps