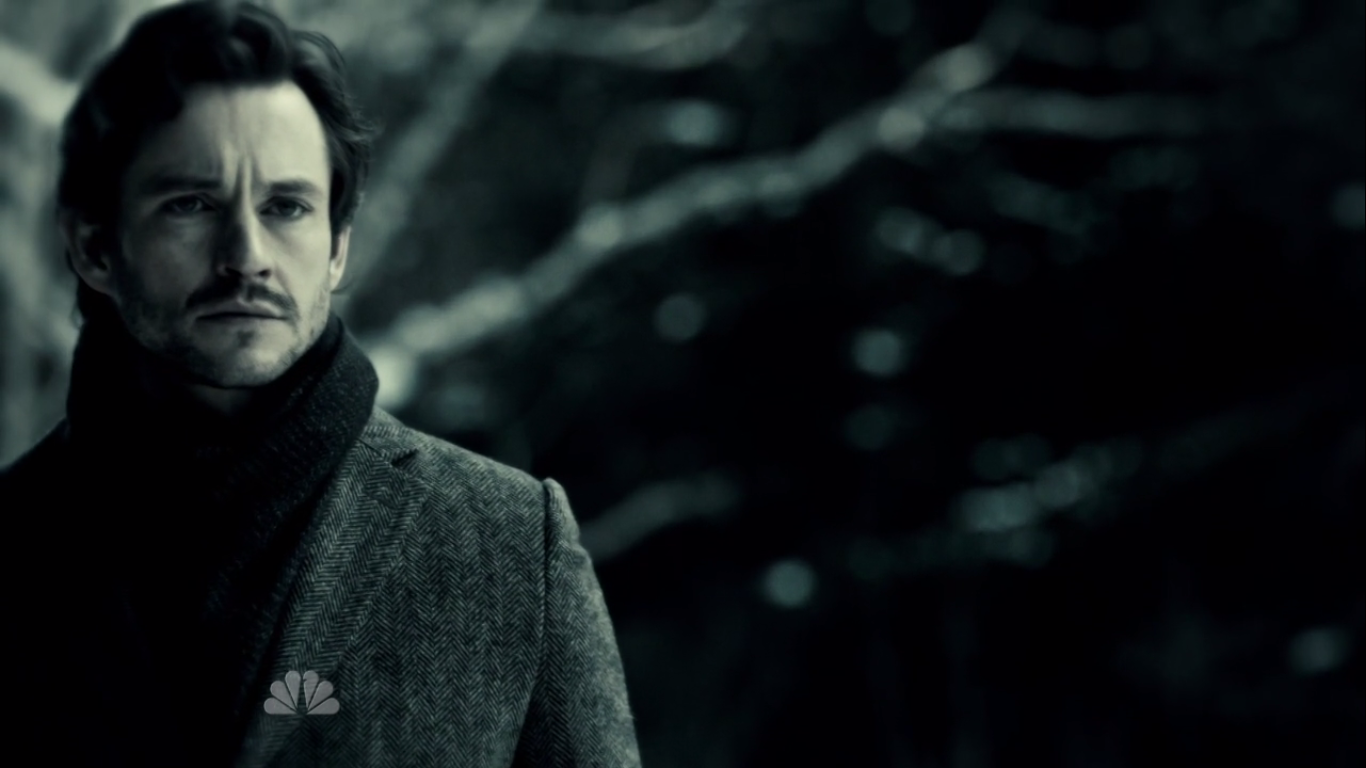 Hannibal proves week after week that it’s a force to be reckoned with.  I can honestly say I’m not nearly as emotionally invested in anything else on TV at the moment, even though my fandom activity is pretty spread out among a variety of different shows.  This week started off with a typically gruesome murder that could have been a self contained murder-of-the-week adventure, but it still managed to pull in ongoing plot threads and touch on major themes from the season in an important way.  The stakes were also upped this week when Will’s dogs were put in the firing line, which made me realize just how important these animals have come to me as a viewer.  We see people murdered in horrific ways every week, but it’s the thought of Will’s dogs being hurt or killed that could potentially push me to leave this show behind.  I’m not exactly sure how I feel about that personal revelation, but it is what it is.  One thing I am certain of, however, is the fact this show hasn’t been picked up for a third season yet is more criminal than anything Hannibal has done at this point.  I don’t know why NBC hasn’t renewed it because it is absolute perfection. 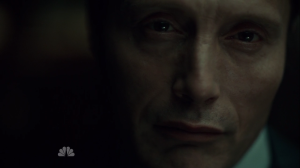 This week’s killer turns out to be a former patient of Hannibal’s, which brings us back to the topic of mental conditions and the role they play in criminal behavior.  So far this show has seemed mostly respectful of mental illness and other disorders.  It’s largely avoided classifying any of the characters with anything definitively or attributing their misdeeds entirely on their mental condition.  So many shows are quick to label their characters, but without a background in psychology it comes off as offensive and ignorant to those who study it or have the conditions with the labels the characters carry.   It’s a very difficult topic to navigate so I’m grateful that the show does it like this.  You can’t really avoid the topic since Hannibal is a psychiatrist, but you can treat it with tact and avoid pigeonholing people with mental illness or other psychological conditions.

This week we get Randall Tier, a former patient of Hannibal who says that he has an identity disorder.  The word ‘schizophrenia’ is briefly mentioned by Hannibal, but not definitively applied to Randall. Identity disorders can lead to terrible things, but can also be quite manageable with proper treatment.  When the media portrays people with these conditions it’s almost always negative.  Even here Randal turns out to be a killer.  It’s pretty clear that Hannibal was driving him to commit his final crime against Will, though, and it’s heavily implied that he set Randall down this path many years ago.  People with mental conditions, even ones that are often portrayed severely negatively in the media, can lead productive lives.  With Hannibal Lecter as your psychiatrist, though, your odds of managing your condition in a healthy way are significantly diminished.  Could Randal have led a life free of killing if he’d had a different doctor?  Could he have managed himself on medication and therapy?  Was Hannibal his ultimate doom or would he have ended up going down the same path anyway?  The case of Randal Tier is left very open to interpretation and, thankfully, doesn’t put the blame for his murderous ways entirely on his mental illness. 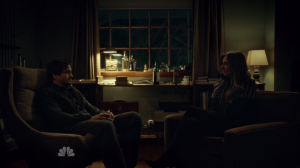 We also got to see Margot Verger, who many fans recognize as Ava from season 2 of Supernatural. The actress, Katharine Isabelle, has been absolutely phenomenal in this role and I’m really happy to see her again.  Margot is a complex character who’s being pushed by Hannibal towards trying to murder her brother.  She’s smart, though, and recognizes Hannibal’s attempt at psychic driving.  She seeks out Will to confide in him, but the whole situation feels very conflicting for her.  On the one hand I feel like Margot’s attempt to reach out to Will is genuine.  She’s in a dark place and her psychiatrist is pushing her into something even darker so she’s acting on it before she gets worse.  On the other hand I feel like she really does want to kill her brother, and the vibe that I got from her therapy sessions felt like she wants to go along with Hannibal’s pushing.  I could have been reading those scenes incorrectly, though.  As I said, Margot is complex so her feelings about killing her brother may be troubled and conflicted.  Margot has the fortitude to seek out other patients and compare notes, though, before Hannibal can drive her too far into darker territory, which makes her at the very least pro-active in trying to not kill someone.

We also briefly revisit Peter Bernardone, whose mental illness was caused by a kick to the head from a horse.  He’s a very empathetic person and, like Will, is able to connect with animals in a way that he can’t with other humans.  My first thought when Will and Peter were bonding was “please don’t let Hannibal burn this friend alive like Georgia.”  It’s so hard for Will to make friends and there are a lot of similarities between how Peter and Will relate to others.   Will has his dogs to focus on and Peter has numerous critters to relate to, including a small rat that he’s taken on as a pet since being taken into custody.   When Will sees the rat he smiles, probably because he recognizes Peter’s need for a pet and empathizes with him.  Most of their conversation revolves around animals, too, and Peter emphasizes that animals can have friends just like us.  The entire scene with the rat nearly broke my heart because Peter and Will are so alike in so many ways.  Their ability to connect with animals more than their fellow man will always be seen as odd by outsiders. 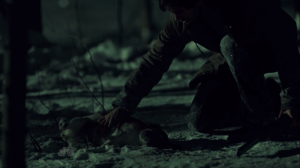 The real emotionally gut wrenching scenes in this episode came in the final moments when Will’s dogs were put in danger.  My Twitter timeline immediately exploded with people threatening to quit the show if one of his dogs got killed, and honestly, I completely understand where they are coming from.  I’m very invested in this show and probably won’t be going anywhere no matter what they do, but if one of Will’s dogs dies in a violent manner I will feel completely betrayed.  It’s an unsettling realization that I can watch brutal murder every week, including some main characters who I very much love (RIP Bev), and even watch the protagonist get thrown in prison for crimes he didn’t commit, but killing a dog is the last straw.  When he found Buster injured but still alive I was relieved.  His heroic slow-mo run back to his house with his injured puppy in hand was amazing, if not a tad over the top.  It didn’t end there, though.  Even once he and all of his dogs are safely inside he’s still stalked by the murderer.  It results in the murderer crashing through his window and being promptly killed (presumably) before Will or any of his other dogs come to more harm.

I hope you were listening to that, NBC.  If this show gets renewed for another season (praying hard for this), you can go on a killing spree of so many main characters and we’ll be upset, but ultimately stick around.  You kill one of Will’s dogs and we walk.  Got it?  Good.  It is very important to know this bit of information.  We may be a relatively lighthearted fandom for  a show that’s incredibly bleak, but we’re also enormously protective of Will’s puppies.

We’re nearing the end of the season and quickly approaching the scene that kicked off season two.  Jack Crawford’s days with a stab-free neck are numbered and Hannibal’s world is slowly starting to crash down around him.  The fact that we’re nearing the finale and the show hasn’t been picked up for another season yet is extremely worrying.  It is truly one of the best shows on TV and if it falls victim to Bryan Fuller’s two season curse (RIP Pushing Daisies and Dead Like Me), there will be a sea of angry fans to reckon with.  Do the right thing, NBC.  Renew this incredible show.