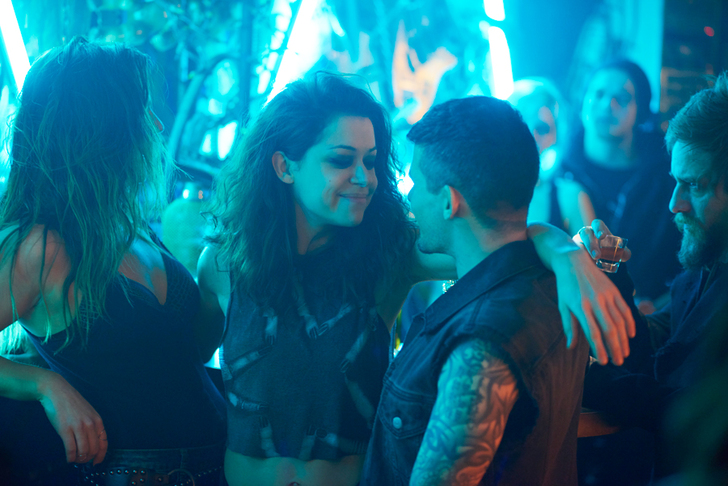 Well, this was one intense episode. Unlike last week where we had to deal with the shock waves of poor decisions, “The Antisocialism of Sex” was mostly focused on how all of our main characters are dealing with the outcome. And for the most part, they are all having a very difficult time.

As the title of the episode implies, the person who is having the toughest time dealing with the fallout of Evie Cho and Kendall’s death is Sarah, in that she seemingly reverted back to her partying ways. After the realization that she and Cosima were really the main perpetrators of getting Kendall killed, Sarah decided to repress those emotions and run, just as when we first met her in season one. Instead of taking responsibility and working through her emotions with S, Kira, and Felix (and frankly Cosima who really needed someone as well), she went on a bender. This was classic pre-Clone Club Sarah where all she thought about was herself. After some very hot threesome sex scenes at the bar, Sarah found herself without friends, without family, and high and drunk on a bridge seeing visions of Beth. Fortunately, Felix found her just in the nick of time and coaxed her away from the edge. After all, this show is all about family. Although I appreciated what the writers were trying to portray with Sarah losing control and wanting to end all of the pain caused by this clone knowledge, Sarah’s behavior did seem rather clunky to me. Sarah, even with all of the events that took place last week, is not the same woman she was three seasons ago, and I find it hard to believe that after all of the character growth that she would revert so easily. Luckily, it seems we are past it and can move on.

In contrast to Sarah’s acting out, Cosima had a different approach to her grief. Not only did not she witness Kendall’s death, but she learned the “truth” about Delphine. Cosima grieved in a way that was very Cosima–getting high and hiding out. I did think that she would have trusted Scott more with her feelings, but I get why she felt she had to take matters into her own hands. It was painful to watch her try to insert the implant into herself, and again, it was Felix who came to save the day with that bombshell–Krystal saw Delphine get shot, but confirmed that she was alive the last time she was seen. There is still hope, Cophine fans, as Cosima definitely realized. It was that bit of information that stopped her from doing something dangerous, and Cosima’s grief sequence felt a lot more realistic and in-character.

Even though Sarah and Cosima had some very raw emotions that they were working through, it was actually Alison’s story that I felt the most sad about. Sure, Alison may not be the most emotional of the clones, but she definitely puts on the bravest face. Being able to throw an awesome sleepover birthday party for Gemma on the same day that she found out about the colossal mistakes that ended with Kendall’s death made her Su 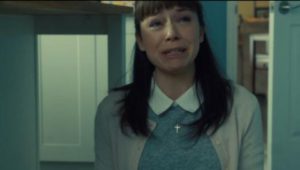 per Mom, and she tried hard to keep it together. And frankly, she was doing SO GOOD until those cops showed up. I knew that it would just be a matter of time before the Hendrix luck ran out, but I did not see the shakedown happening at the birthday party. How absolutely terrifying! Donnie is one of the best characters of this show, so I hope that his stint in jail does not last long. PLEASE!

But let’s go back and talk about who set the shakedown in motion: Art. We haven’t seen a ton of Art this season, but every time we do, he is kicking ass on behalf of the Clone Club. This week he took down Duko after starting to learn the truth about his role in Neolution and the clones. I love the fact that he is so loyal, and he is a great ally to have, but his beatdown of Duko undoubtedly was the reason behind Donnie’s subsequent arrest. I just hope that Art, for as passionate as he is, starts getting a little smarter about his actions and tries to not let his emotions cloud his judgment. The fact that he is a cop is a huge boon for the clones, so let’s hope he can hold back long enough to keep his job.

The final story that I want to touch on is Rachel’s. It was so cool to see a little bit behind the curtain of Neolution told by none other than Susan Duncan. It totally makes sense that Neolution is a kind of scientific pivot from evolution where the goal is to create a perfect human. We also learned that clones were the last incarnation of trying to perfect humanity, and now Evie’s implants are the new wave. We will have to see how this all shakes out, but those visions of the swan that Rachel was having were a bit worrying. It doesn’t seem like they were visions from the brain, but rather visions from her bionic eye. I wonder if someone is purposely implanting the images, or what the whole story is. We will have to wait a bit for answers.

I totally get where the writers were coming from in “The Antisocialism of Sex”, but I don’t think it did our clones justice for the growth that has taken place over four seasons. I don’t want to see our Clone Club scared and suffering–I want to see them strong and working together to overcome the grief and make the next smart move.