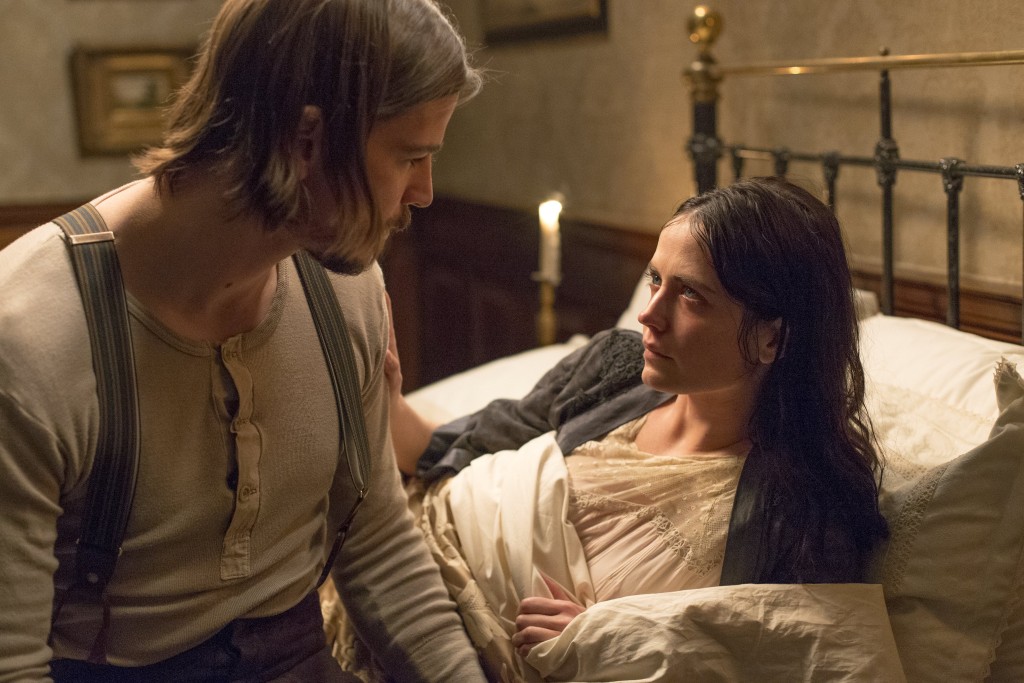 Penny Dreadful this week was a slow and intense burn. We didn’t get a ton of momentum in each storyline, but we learned a little more about each of the characters and got some new interactions among our night crew. Indeed, this episode was all about connections, or as I like to call it, the episode where everyone has sex. Which is fine because frankly, all of these characters deserve a little pleasure for once.

After the excitement of last week’s episode when the nightcomers entered Sir Malcolm’s home and stole some of Vanessa’s hair (for her doll, as it turns out), it was really neat to see Ethan and Sembene work together to protect and enchant the house through bolting the doors and using smudge sticks throughout. Even Dr. Lyle donned his yarmulke to bless the house through prayer. We even got a little bit of Ethan’s backstory and his involvement in the U.S. with the Indian Wars. Through a series of events, including an interview with an investigator from Scotland Yard, it looks like we will soon have many more of the puzzle pieces to learn even more about him.

Evelyn’s story both opened and clos 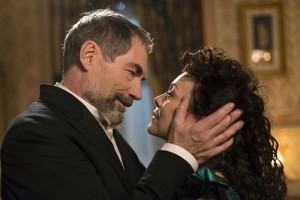 ed “Above the Vaulted Sky”. We got a much bigger taste of her dollhouse of horrors, which is nightmare fuel. She is very clearly toying with Sir Malcolm, as we see that she has a doll of his wife, whom she tortures via the doll. Mrs. Malcolm has seizures and horrific hallucinations of her dead children and kills herself by the end of the episode. This is evidently all part of Evelyn’s plan as she sleeps with Sir Malcolm by the end. I am not sure what she is up to exactly, but it is creepy as hell!

Speaking of creepy, we got to see the reunion between John and Lily. Lily wants to take it slow and just be friends, and my heart aches for John/Caliban. She is clearly falling for Victor, and who can blame her? He is so sweet in taking care of her and answering all of her questions. In an ironic twist, Lily is afraid of thunderstorms. She ends up in bed with Victor for comfort, but the comforting doesn’t stop there. They end up sleeping together, which is great for Victor, but probably not the best news for John.

Even Dorian got a little interesting in this episode with his connection to Angelique. After an outing to the opera, a former client of hers calls her out as a “freak” publicly and spits in her face. Dorian, bold as ever, kisses her hand in front of all in support. Later back at Dorian’s house, they have a lovely scene together where Angelique explains that she has always felt herself to be a woman even though born male. She accuses Dorian of only liking her because she is different and exciting, but Dorian counters with that he cares for her no matter what. It was a very touching scene, and one that gently speaks of gender identity in a non-sexual way…even though they end up in bed together eventually.

More Vanessa and John! They speak of poetry and failed love, and even shar 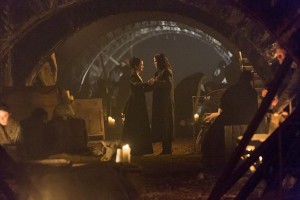 e a dance. I am sure that most people probably like Vanessa with Ethan, but I totally am in love with the dynamic between Vanessa and John. There is just something so vulnerable and sad about them that they compliment each other so well. Perhaps it is because neither one of them are meant for this world that they just seem to be best suited to each other on a higher plane than everyone else. They just break my heart when they are onscreen together, but I find so much hope in their friendship.

This episode really fell back into the lilt that last week’s episode had as well. There was much more focus on the hope of the character connections than there was on the macabre and dark storylines. I am finding a lot of pleasure in Season Two because it seems much more focused on finding the voices of the actors and characters than it is for shock value and horror. As someone who loves the horror genre, I don’t mind taking a little break every now and then to emphasize the light.