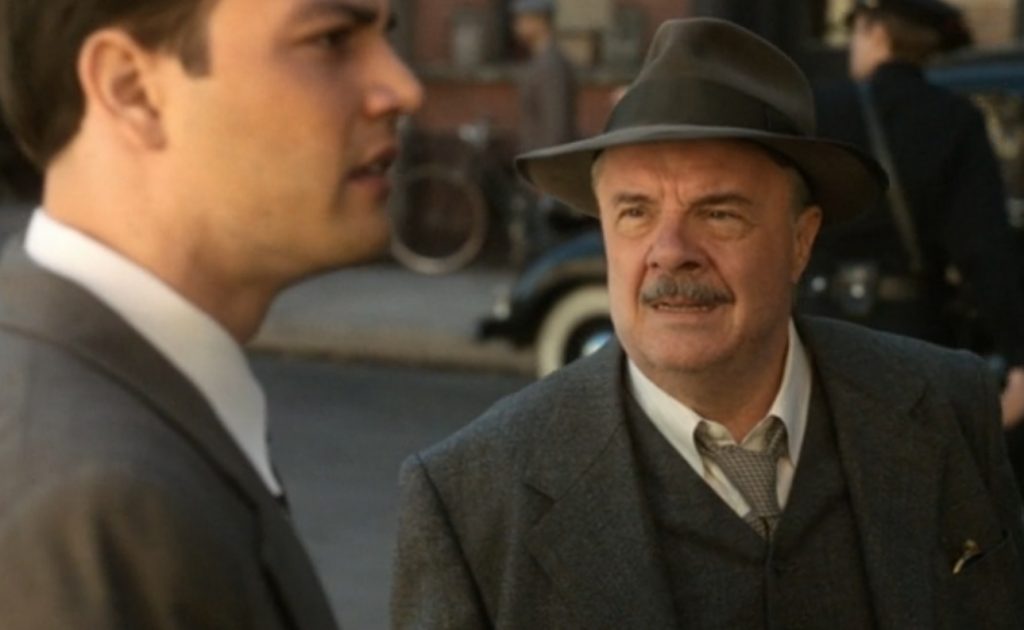 Santiago and Lewis in ‘Children of the Royal Sun’ (Image: Screengrab)

‘Children of the Royal Sun,’ the midseason episode of Penny Dreadful: City of Angels, was about characters getting to show different sides of themselves. Also, more confirmed queer characters. Ha!

‘Children of the Royal Sun’ opened with Elsa going to some club to pick up a man. The moment she told the man to take her home and hit her, I knew she was going to use him to get closer to Peter Craft. From what I could understand, Elsa made Peter Croft assume the man was her husband and that she had killed him to protect herself.

Of course, Peter did what he could to help her and the two ended up burying the man’s body. And because being all hot and sweaty after digging a grave is sexy (I guess), Peter and Elsa hooked up right on the spot.

Before Peter went to help Elsa, he did show some regret about cheating on his wife. But it’s clear Elsa’s hold on him is too strong. It will be interesting to see if Peter’s wife has a larger role to play in the narrative instead of being a wife who’s unhappy about her husband’s betrayal.

As for the rest of the characters, Rio worked her magic on Mateo. It was understandable that Mateo felt a lot of guilt due to murdering Reilly in the previous episode. However, Rio was quick to change his mind by saying he’s a hero and how a terrible person like Reilly deserved to die. Rio also gave a speech about the Aztecs and how the Europeans influenced their culture. She urged Meteo to purge himself of his past life and become his true self. And, of course, they hooked up as well.

Now, the moment Rico entered the room and saw those two in bed I knew where this episode was going. Y’all, Rico smiled and joined Mateo and Rio. So, there you have it! For those of you who thought Rico and Mateo were queer characters, well, ‘Children of the Royal Sun’ gave us the answer.

As for the other queer character on this show, Alex had some strong words to say to Charlton. He’s clearly falling for Kurt. I liked Alex’s warning about not letting his feelings get in the way of the bigger picture. Charlton’s sexuality can easily be used as lethal ammunition by his opponents to kick him out of his position in the city.

I wasn’t expecting this series to give so many layers to Charlton. I thought he was going to be a supporting character (compared to the rest of the cast). However, he does seem like one of the actual leads in the ensemble with an individual character arc he will need to go through.

The scene where he’s all alone in his big house was nicely done. I liked seeing a happy Charlton tapdancing while listening to the music he enjoyed.

But I still don’t know what to make of him. Yes, he’s being forced to stay in the closet because of the era he’s living in. However, he’s doing a lot to harm a minority community. He’s also hooking up with a Nazi. That’s why I’m looking forward to seeing if Charlton will get to have some kind of a redemption arc or if he will continue to be a mess.

There are a whole lot of queer characters running around in Penny Dreadful: City of Angels and I’m here for it.

Coming back to what Rio said about the Aztecs, I would like this show to offer us more about Magda’s backstory and her links to various religions and cultures. I would like to know how she was created and why she’s so interested in seeing humanity destroy itself.

As for Molly and Tiago, even though I enjoy the chemistry between the two, I still don’t trust Molly. When she told Tiago the story about how a group of men helped her and her mother years ago, I could feel she was hiding something. It was if she was lying to Tiago to make her mother look like a good person.

I think the story that Molly told Tiago’s sister about how a group of men took advantage of her as a child (and how her mother allowed it to happen) was the truth. Also, during Molly’s story, she mentioned a large part of the incident being a blur to her.

Pairing that with what Molly’s mother said about her relationship with Tiago not ending well, I think there’s something up with Molly. The previous episode made it look like she got possessed by something for a moment. So, could that mean that Molly, in dire situations, can get possessed and kill or harm those around her? Did a possessed Molly do something to the group of men (from her story) when she was young? We will have to wait to find out.

‘Children of the Royal Sun’ also showed Tiago and Lewis trying to figure out who killed Reilly. Seeing them work as a team was fun. The Hazlett family murder investigation is still being dragged out, though. And I’m not a fan of that. The two need to get their priorities in order.

I mentioned this episode allowed various characters to show different sides of their personalities. Maria told Lewis about how Santa Muerte has different colored statues you can pray to (depending on what you want). For example, you pray to the red statue for love and the black statue is prayed to when you want protection from evil. Maria also gave Lewis a small black statue.

In my opinion, the talk about the different colored statues linked to the human characters, too. Mateo stepped into his role as someone who’s ready to do anything (including murder) to fight injustice. Charlton has begun to display a more caring face. Tiago, while asking questions about Rico’s whereabouts, displayed a very angry side that even took Lewis by surprise.

Lewis comparing Tiago’s outburst to the story of Dr. Jekyll and Mr. Hyde made sense. There’s clearly darkness and anger inside Tiago and of course, Lewis wants Tiago to remain connected to his honest side.

There’s just so much that Tiago’s dealing with. He wants to do the right thing as a detective, but he’s falling in love with a murder suspect (Molly) and he allowed his brother Mateo (a confirmed murderer) to run away. He’s already shot his older brother Raul (who, fortunately, isn’t dead).

Let’s see if Santa Muerte’s blessing can help him down the line.

Did you watch ‘Children of the Royal Sun’? What did Tiago talk to Raul about in private?