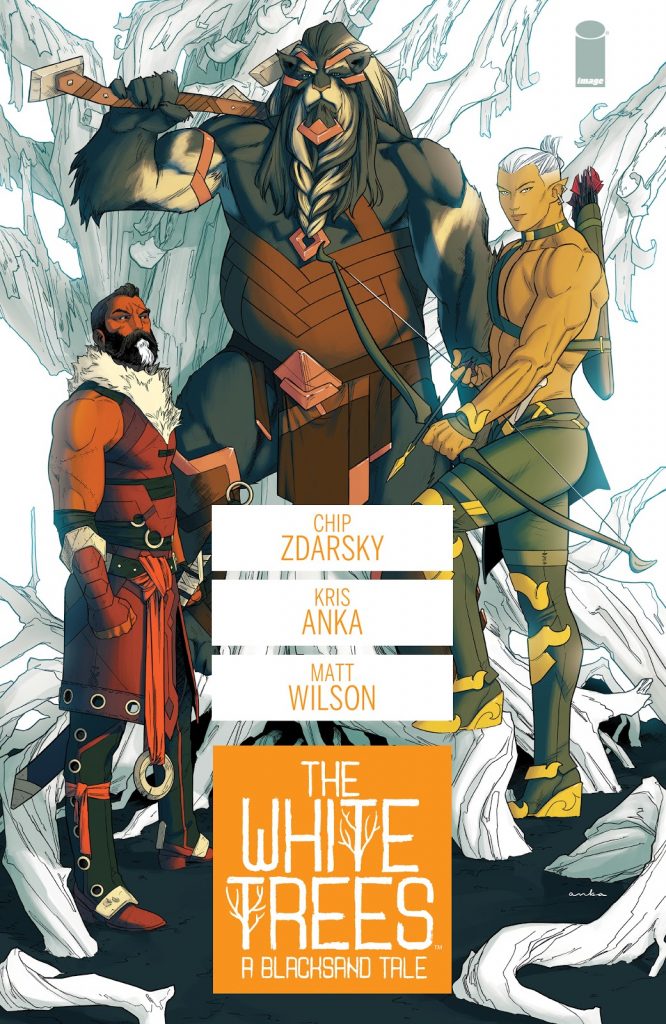 The White Trees Issue 1 offers readers an interesting debut for a 2-issue comic book story. If you’re looking for a narrative set in a world of fantasy with queer leads which also doesn’t ignore the emotional impact of war, I recommend you pick this issue up!

The White Trees Issue 1 is by Chip Zdarsky, whom certain fans might know because of his work on Daredevil and Spider-Man over at Marvel. This current 2-issue story is from Image Comics. Why did I decide to read it? Well, I don’t know if it’s a superpower or not, but like to think I have an impressively tuned gaydar. It was because of this skill I read Freelance (the cover looked queer to me). And the same ended up being true for The White Trees. It’s incredibly queer and definitely not meant for kids. I’m talking full-on nudity (and aroused body parts) here. So, be cautious.

Coming to the story, it’s brought to life through the artwork by Kris Anka and Matt Wilson. There is a sense of simplicity in the overall illustrations, however, even then each panel is able to exude a mood that fits well with the narrative. The world of Blacksand is vast and fantastical, yet there is a sense of gloom and war around.

Our leads are Krylos (some type of humanoid), Scotiar (an elf), and Dahvlan (lion-person). All three are regarded as legends, but they have moved on to living war-free lives. Things change when Krylos’ son and Dahvlan’s daughter are kidnapped. The three set out to rescue the children because their King’s hands are tied due to the current war.

As far as the queer component is concerned, Scotiar and Dahvlan are in a relationship. Dahvlan was married to Milola (a female of his species) and that’s how he fathered a daughter. Milola and Scotiar don’t share any bad blood. There’s a lot of progressiveness going around, which I appreciated.

I’m not sure if Krylos is completely straight or not. During the scene where a bunch of pixie-type creatures tried to seduce him, the leader of the pixie group seemed to have fluid gender. So, I’m not sure. But anyway, the point is The White Trees definitely doesn’t shy away from being hella queer.

Each character has a lot of baggage to deal with. I liked seeing how they coped with their emotions in their own way. Krylos mourned the death of his wife. He had also laid down arms after the war and refused to fight. The scene between him and a chained dragon was very interesting.

Scotiar’s feelings about being forced to be a step-father to Dahvlan’s daughter also came forward. And I think Dahvlan is struggling with suicidal thoughts.

The White Trees Issue 1 presented so much potential, it made me wish the story would last longer than just two issues.

Apparently, this 2-issue series will be the first in many stories set in the world of Blacksand. I’m excited to see what happens next.

Again, if you’re looking for a new story that isn’t your usual superhero fare and doesn’t shy away from having queer leads or exploring the emotional impact of being a soldier, go pick up The White Trees. It doesn’t offer anything unique to the genre, but it still works wonderfully!