Turns Out “Thor: Ragnarok” is More like “Homecoming” Than “Civil War”

The Marvel Cinematic Universe’s signature is humor laced through deeply emotional action. Solo films tend to have similar tones, though. There’s the silly movies (Homecoming, Guardians of the Galaxy) and the more serious movies (Iron Man II, Winter Soldier). In the past Thor has fallen more towards the serious side. Thor: Dark World was clearly aiming for intense, at least.

Thor: Ragnarok, though? This one is a romp. It’s full of action and music and big tough heroes put in ridiculous situations. By now you’ve probably seen the infamous “friend from work” scene- now imagine a whole movie along those lines. I haven’t laughed so hard during a Marvel movie since- okay, well, Spiderman: Homecoming, but beside that it’s been a while. Things have been getting pretty intense in the MCU as of late. The Infinity War is coming up, and with so many glorious heroes crowding into that behemoth it’s a safe bet they won’t all make it out alive. We needed a breather before possibly saying goodbye to a fan favorite. 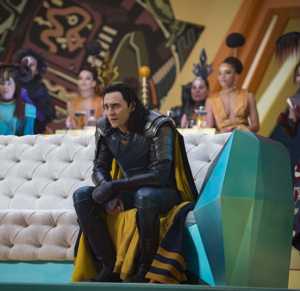 If you’re a Loki fan, this is a good movie for you. Not gonna say why.

This is that break. Ragnarok deals with some pretty intense themes: fractured families, genocide, loss of self, even slavery (those gladiators on Sakaar aren’t exactly volunteers). Despite that the overall tone is light. The score hits all the right notes for an action-adventure, classic rock mixed with killer orchestral pieces. One example: Thor’s theme song is Immigrant Song by Led Zeppelin, which is perfect since he is the “hammer of the gods”.

The colors are bright, especially on Sakaar. One thing I noticed was that while the movie as a whole was visually cohesive each world had its own distinct color scheme. I could see a frame from any of the three planets, even one without identifying characters, and recognize it by color. That’s something a lot of art directors try for, but it’s not often so smoothly done. 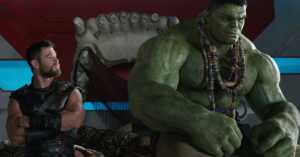 I love how Thor treats Hulk as a sensible person by default. Must be an Asgardian thing.

It’s become the rule in solo Avengers movies to have a few other heroes along for the ride, and Ragnarok is no different. We get the Hulk in all his overmuscled glory. He’s a little more verbal, like he is in the comics, and apparently he’s been at the wheel for a long time. (Let’s all take a break to remember that Bruce Banner has the most tragic storyline in the MCU, and I’m including Bucky.) It is fun to hear what the Hulk has to say about his life. We haven’t heard from him outside of “SMASH!”

There’s enough large scale eye candy to make Ragnarok worth seeing in IMAX if you can. However you see it, go soon. This is Marvel at its best: fun, flashy, and full of heart.

PARTING THOUGHTS WHICH ARE ALL SPOILERS- YOU HAVE BEEN WARNED!

Have you made it our to see Thor: Ragnarok yet? Share your thoughts in the comments section below!

Previous:Mr Robot 3×4 Review: metadata.par2
Next: April O’Neil Will Be African-American in Nickelodeon’s Rise of the Teenage Mutant Ninja Turtles!