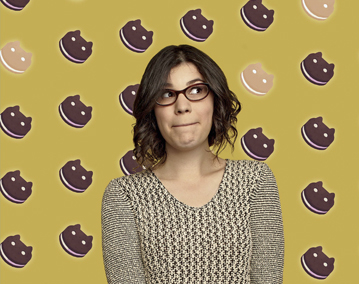 Animator, director, and composer Rebecca Sugar conducted a Questions and Answers session at the recent 2016 MoCCA Arts Festival, where she explained a lot about her current projects, as well as how her earlier works led her to her current position.

Sugar, who has produced numerous independent comics and worked as a storyboard artist on Adventure Time, is best known as the creator of the critically-acclaimed Steven Universe. She spoke about her background as a writer and animator, the philosophies built into the show, and dropped tantalizing hints about the future.

The full video, shown below, is absolutely worth a listen — but at a full hour, here are some of the highlights.

In my opinion, some of the most impactful parts of the interview was when the panel turned to discussing the issue of representation, for which Steven Universe has been justly praised.

Interviewer: I noticed that the majority of the characters are voiced by women of color. And I just wanted to ask you: there are a lot of characters depicting diversity in a lot of ways. How important is it to have actual diverse people behind the show, either in the cast or on the crew?

Sugar: It’s hugely important. I mean, not even speaking specifically racially, I also think that diversity in experience in general is so, so important because that’s how all interesting things happen creatively. What is American culture? What is anything? If you bring people together, like also on the team, from dramatically different places in terms of what we like from cartoons, and trying not just to find a middle ground between what we all like, but also preserving that things we all like and having them co-exist in the show so that we can have both Patti LuPone and Tom Scharpling in the same show. Deedee [Magno-Hall]’s coming from Miss Saigon, Michaela [Dietz]’s was coming from being on Barney! Part of what’s super important to me is that we didn’t all start doing this for the same reasons, but I’m interested in everyone’s reasons. And I get to learn a lot about people who like things for different reasons than I do.

They also discussed the issue of queer representation in children’s media:

Interviewer: You said ‘You can’t wait until kids have grown up to let them know queer people exist’. And I thought that was a really interesting thought that I’d like to hear more of, if you don’t mind expanding on that.

Sugar:  Um, yeah… You can’t… I think there’s this idea that that’s something that applies, or only should be discussed, with adults. That is completely wrong. And I think that when you realize that talking to kids about heteronormativity is just like air that you breathe all the time, it’s kind of amazing that that’s not true in any other capacity. I think that if you wait to tell queer youth that it matters how they feel, or that you are even a person, that it’s going to be too late!

A lot of times I think about fairy tales and Disney movies, and the way that love is always something discussed with children. I also think there’s this idea that, ‘oh, we should represent queer characters that are adults, because there are adults that are queer, and that’s something that’s happening in the adult world’, but that’s not how those films or those stories are told to children. You’re told that you should dream about love, about this fulfilling love that you’re going to have. The Prince and Snow White are not someone’s parents. They’re someone you wanna be, that you’re sort of dreaming of a future where you’ll find happiness. Why shouldn’t everyone have that? It’s ridiculous! It’s really absurd to think that not everyone should have that!

Anyway, I think about that a lot. You know, I watch these… I loved Disney movies when I was little, but I never felt like they were me. Ever. Oh, but I loved them, as this other, beautiful thing that people can have. There’s something, a lot of times when I warm up I play music, I like to play ‘So This Is Love’ from Cinderella. I think it’s just a super, super beautiful sequence. I’ve never felt like Cinderella, I’ve never been this blonde in this huge blue dress that I can spin and sparkles fly everywhere. I don’t feel like that would ever be me, or ever felt like it was me, I just like to look at it. I want one where that’s happening to me.

Not long ago, I wrote an article celebrating the queer representation in Steven Universe. One of the responses I got to it — one which comes up every time somebody discusses diversity in media — is “why does this even matter? Why not focus on all the other great aspects, instead of singling out this one thing?”

This is why it matters.  It erodes homophobia and transphobia, teaching that that these people exist, and that they can be smart, brave, kind, and heroic. It gives queer children a chance growing up to know that they are not alone, that they are not broken.  It gives people an opportunity to see themselves in something they love. In the Q&A, they brought up this comic by Tilly Walden, about a teenage lesbian couple who draw safety, security, and strength from Steven Universe. I think that piece shows, better than anything, the power that representation can give.

Rebecca Sugar has brought us a show with gorgeous music, stellar animation, amazingly diverse, complex characters, and a wonderfully woven plot. There’s space in our hearts to love all of it.